I’d like to tell you that we used Advent calendars and mediation guides faithfully when I was growing up, but I feel like telling a lie around Christmas time is an especially bad personal choice. So, I’ll tell you the truth. When I was growing up, we did observe Advent, after a fashion, or rather we did the same things in pretty much the same order every year from Thanksgiving to Christmas Eve.

Advent, for my family, went something like this. The weekend after Thanksgiving usually involved my mother and grandmother decorating their Christmas trees—when we moved in with my grandparents when I was 17, this part of the process was streamlined quite a bit.  Because I have a cedar allergy, in addition to several other tree-pollen allergies, we always had artificial trees—because the only thing more fun that celebrating the season of miraculous expectation with your family is being able to breathe while you do it.

The whole next week would be filled with them twisting and turning the tree itself, adding strings of lights (we really deeply, firmly, and borderline fanatically believe in a well-lit Christmas tree in our family), making sure there were no patches that weren’t properly covered by ornaments or bracketed by tinsel trim. Please believe me when I tell you that it took them a whole week to do this, because it did. And those gals decorated some truly spectacular trees in their time, and still do.

They would tell us stories about particular ornaments, or Christmas shenanigans from before we were born. They would put out Nativity scene after Nativity scene, and I remember many conversations with my own mother about the Holy Family as we found each of the scenes special places to abide.

The following weekend was almost always a cookie and candy making bonanza. Flour, sugar, butter (honest to goodness real butter, too), and eggs were augmented with chocolate morsels, various jams and jellies, butterscotch, walnuts, pecans, almonds, and coconut to make the cookies and sweets Mom and Grammy would make every year. They made cowboy cookies, angel bars, orange balls, haystacks, almond bark fudge, divinity, date loaf, jam squares, sugar cookies, snickerdoodles, and at least three other kinds I’m forgetting. The heavenly host would have been well fed from that kitchen.

Some of the cookies and sweets would be gifted to family friends or teachers, some of them were taken to Coffee Hour at church, and the bulk of these sweet treats hung around our house in tins and baggies and Tupperware containers (oh, my!) until they were picked (and occasionally, licked) clean. Also included in this were at least seventeen gallon bags full of homemade Chex mix, made according to a recipe my grandmother and I worked out when I was ten or eleven years old. The sweet smell clung to their clothes, and they smelled like cookies for at least two days afterward whenever I hugged them. Sharing the hard work of their hands and their joy in making these treats was all part of the fun for me, even if my constantly too-hot hands always exempted me from rolling out the sugar cookies because they would melt in my hands.

My least favorite weekend was usually the one right before school let out for Christmas. We’d pile into the car and drive 80 miles to the nearest “good mall” so my parents and grandparents could finish their shopping, and so my brother and I could scour the Walgreens for emery boards and styptic pencils for the grown-ups stockings. While in The Big City, we might have Chinese food or (if we had been really good and not fought and argued the whole way to town), we would eat at Red Lobster. This was a Big Treat.

Wandering around the mall and having to try and not pay attention to who was going into which store and what size bags they were loading in to the trunk so as not to spoil a surprise was where holiday fun went to die. Also, given that this was during the 80’s and 90’s, I was prevailed upon to try on many, many items in the style of Laura Ashley—lots of bows and lace and big floral prints. This was not fun for me, and may have been one of the first times I really grasped the discipline of penitence in a real and visceral way.

The weekend before Christmas was my most favorite. There was no going, no doing, no more secrets to hatch or keep. My godmother and her two boys would come over to my grandmother’s house, and the four of us kids would be given the run of the backyard and fed very well for the entire day. Fortunately, in Texas this meant we were playing in our shorts and long-sleeved t-shirts for the bulk of the day.

Mom, Grammy, and Aunt Candy barricaded themselves in my mother’s old bedroom, and power-wrapped all the presents they had purchased. While our Christmases were never extravagant, those ladies believed that a well-wrapped gift was a feast for the eyes before it was any kind of nourishment to the soul. And they wrapped like champs. Periodically one of them would come out to the backyard to check on us, and bring us freshly emptied paper-roll tubes. We had the most epic and amazing sword battles in the backyard, dying thousands of times in gory and creative ways. It was the one time we were never bored playing in the back yard, the one time all four of us got along, and let’s be honest—this is probably because we were also having a parent-sanctioned fight in the backyard.  At some point, one of our dads or my grandfather would go get burgers or steak fingers, and we’d all have dinner together. 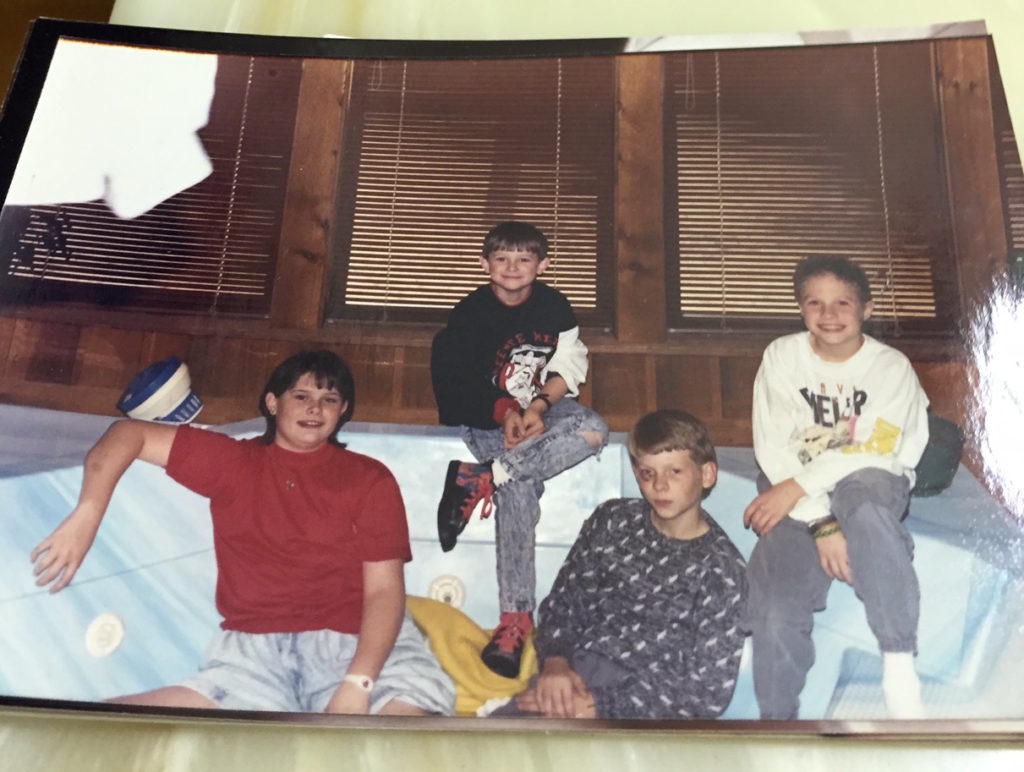 Photo of me, my brother, and my godmother’s two kids. We’re taking a break from the epic backyard battle in my Grammy’s drained hottub, because of course we were…

On Christmas Eve, the house was always full of people, deli trays, crackers, soft-drinks, coffee, and hot chocolate or tea. At around 9:45 pm or so, people would start heading home or off to church. We would all pile into the car and drive to our little country church for Christmas Eve Midnight Mass. Mom and Aunt Candy were usually in the choir, and the four of us kids were usually in the altar party as acolytes, and one of our dads was usually a lector or lay-reader, or ushering with my grandfather. Grammy would hold down the family pew with whichever kid was too sick or crabby or not on the schedule to acolyte. And we would welcome the Baby Jesus into our hearts and the world over and over, pretty much the same way, for many many years.

All four of us kids have grown up, and none of us live at home anymore. Aunt Candy and Uncle Gary are the only ones who still live in our little town, and we don’t all see each other as much as we would like. But I think about the way our extended family observed Advent—preparing our homes and hearts for the gift of Jesus, and I’m reminded once again at how much my parents got right, how deeply they entrenched the story of Jesus and his love into my very soul, and my heart is once again prepared to give him room.

How did you observe Advent as a child, if you did?