Once upon a time, when my children were little and I was still married to their father, I learned to celebrate the 12 Days of Christmas as a default setting for the season.

I could never seem to get decorations and presents and feasts prepared by December 25th, so my belated discovery that the 12 Days of Christmas continue after Christmas and culminate on January 6th with the Feast of the Epiphany was a blessing beyond words. I learned that in some southern European and Latin American cultures, Epiphany is actually the accepted time for gift-giving, so that instead of expecting Santa Claus to deliver presents on Christmas Eve, children there wait for the Three Kings to bring them gifts on Epiphany.

Actually, we started with the Feast of St. Nicholas on December 6th. Following an old tradition, the kids put their shoes outside their bedroom doors the night before, knowing that in the morning they would find gifts from St. Nicholas — chocolate and a small toy — filling their shoes. We talked about who St. Nicholas was and how he had morphed into the image we have of Santa Claus; and then on Christmas morning they would find their stockings filled by the generous saint, along with a single present from us and a few more from the extended family.

Because Christmas Day wasn’t focused on a huge pile of presents, and because we toned down the Santa Claus hype, we were able to spend more time on the story of Jesus’ birth. We waited till Christmas Eve to set up our tree, and after we attended the family service at church, we came home to light a candle over our crèche, symbolizing the bright star over the stable.

Then during each of the days between Christmas and Epiphany, the kids would receive small and sometimes silly gifts to unwrap, until on Epiphany itself we would have another round of bigger presents followed by another feast, after which we would un-decorate the tree. What began as a matter of sanity and convenience became a sacred commitment over the years.

What I didn’t know at the time was that in making a big deal out of the 12 Days of Christmas and Epiphany, I was also unwittingly preparing my children – and me, too – for ways to celebrate Christmas beyond divorce, remarriage, and moving.

The years I was separated from my children on Christmas Day were heartbreakingly painful. That’s just a fact. But having Epiphany to look forward to meant that I didn’t have to experience the whole season without them. After all, the story isn’t over on Christmas Day, and the celebration doesn’t have to be, either. On Epiphany we could still parade around the house singing “We Three Kings,” fix exotic food from the countries the kings might have come from, and exchange presents. The lights of the Christmas tree still burned brightly. The kings and camels that came with our crèche finally reached the baby Jesus. No, it wasn’t the same as being together on Christmas morning, but it was good, and I was grateful.

My children are grown now, with children of their own, but my husband I continue to celebrate the 12 Days of Christmas, to exchange gifts on Epiphany, and to be the last in our neighborhood to take down the tree. 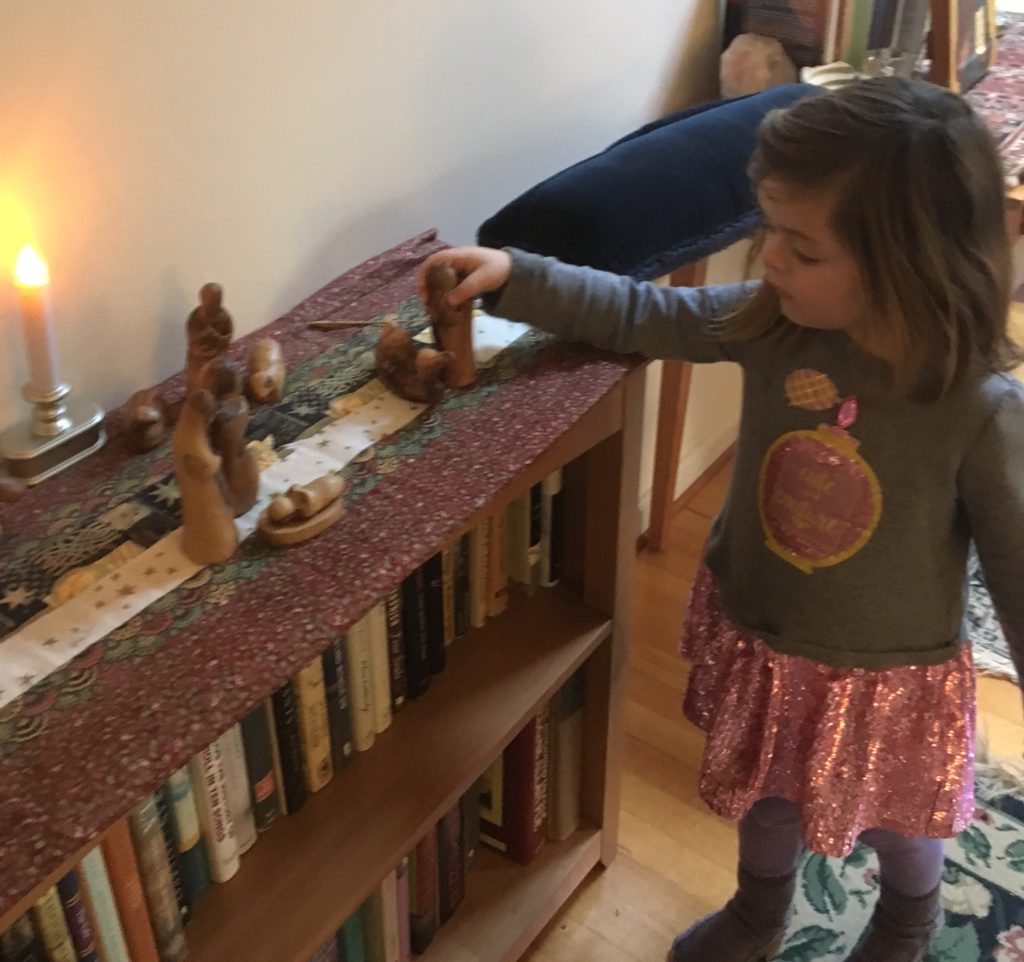 And last year, three year-old Anastasia helped us move the Three Kings closer and closer to the crèche as Epiphany approached. This year, maybe we’ll sing as we move them, and perhaps, over the years, the extended Christmas celebration at Grandma and Grandpa’s house will help my grandchildren learn the sacred Story.

Do you celebrate over the twelve days of Christmas? How?