Anyone who visits our house might guess at why we love Saint Francis of Assisi, known for his love of animals. We have three large rescue dogs. We have a portrait of a yellow lab in 19th century formalwear gracing our wall near the portraits of our actual ancestors. We have dog throw pillows, dog door mats, dog cremation remains in a wooden box on our mantle, and dog breed encyclopedias on our coffee table. We keep the Orvis dog catalog long after it should have been recycled, because the photos make us smile. My Instagram feed features such celebrities as a golden retriever who eats vegetables and corgis on stairs. There may or may not be an odor in every room of our home, but we wouldn’t have it any other way.

There was a wolf, so the legend goes, who was terrorizing the town of Gubbio. He began by attacking the livestock of Gubbio, and then went on to feast on people. The people were terrified. Saint Francis approached the wolf and expressed his understanding that the wolf was only treating himself to a human buffet because he was hungry, and Francis extracted an oath from the wolf that if the people of Gubbio made sure that the wolf had sufficient food, then the wolf would cease and desist with his people hunting. The wolf agreed, and the people rejoiced.
At first glance, this seems like the very definition of negotiating with terrorists. But I appreciate the peaceful approach in the face of fear. I appreciate that Saint Francis saw the root of the problem, which was the wolf’s hunger, and didn’t write him off as evil forever. And I appreciate that, in the end, the people’s fear subsided. 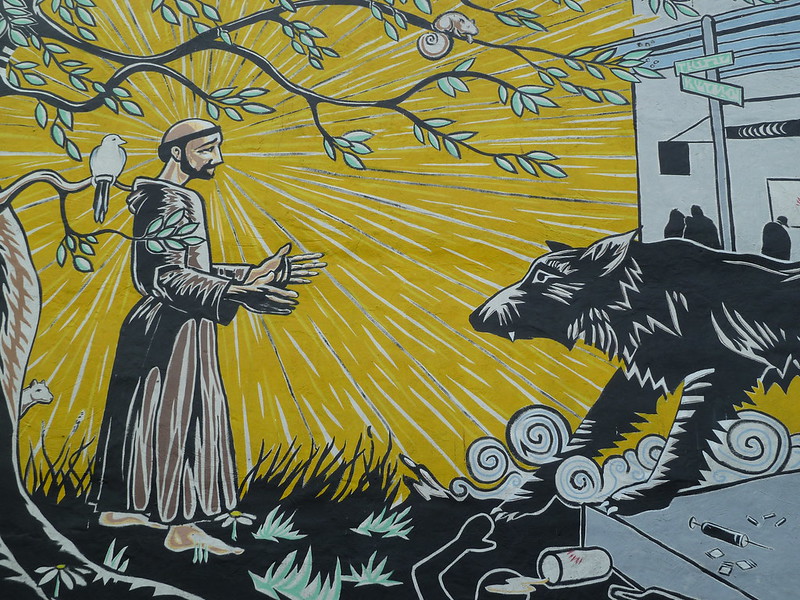 We have a lot of fear in our world right now. I don’t think violence is the answer to our fear, but I don’t know what the answer is. I’m grateful for the peacemakers, like Saint Francis, who represent God’s unrelenting love and care in the face of fear.

Saint Francis’ taming of the Wolf of Gubbio reminds me of a verse in one of my favorite hymns, “O for a thousand tongues to sing.”

Jesus! the name that charms our fears,
That bids our sorrows cease;
‘Tis music in the sinner’s ears,
‘Tis life, and health, and peace.

Jesus, the name that charms our fears. The fears might be hunger or they might be the Wolf of Gubbio. Saint Francis reminds us that Jesus peacefully charms our fears and bids our sorrows cease.