What a powerful moment, this divine encounter.

I imagine a young girl immersed in her day. Was she in prayer?  Was she just waking? Perhaps she was in the middle of her daily shores?  Was she pondering her new situation, promised to Joseph?  She had a lot going on!

In the middle of her ordinary, Mary is encountered by the extraordinary.  A divine presence fills her view.  Mary is greeted with a startling announcement. Greetings! Favored one, God is with you. I wonder if she was feeling favored at that moment.

I take being favored by God on faith. Like the old hymn says “Blessed assurance Jesus is mine…” At the same time, I hunger and long to hear and embrace those words.  Honestly, they might terrify me. So, I can relate to Mary’s perplexity.

Gabriel’s words, “Do not be afraid,” are echoed many times in scripture. Along with, fear not or some version of this. God’s loving presence in the midst of whatever turbulence I face is also promised.

Pregnancy is life changing under any circumstance. I remember feeling overwhelmed by the news of the coming birth of my young ones. My life changed dramatically.

I felt inadequate, fearful and an unimaginable overflow of love. As Anne Lamott says, “Wow. Thanks, Help.” I do believe the Holy Spirit was involved in that tumultuous change. 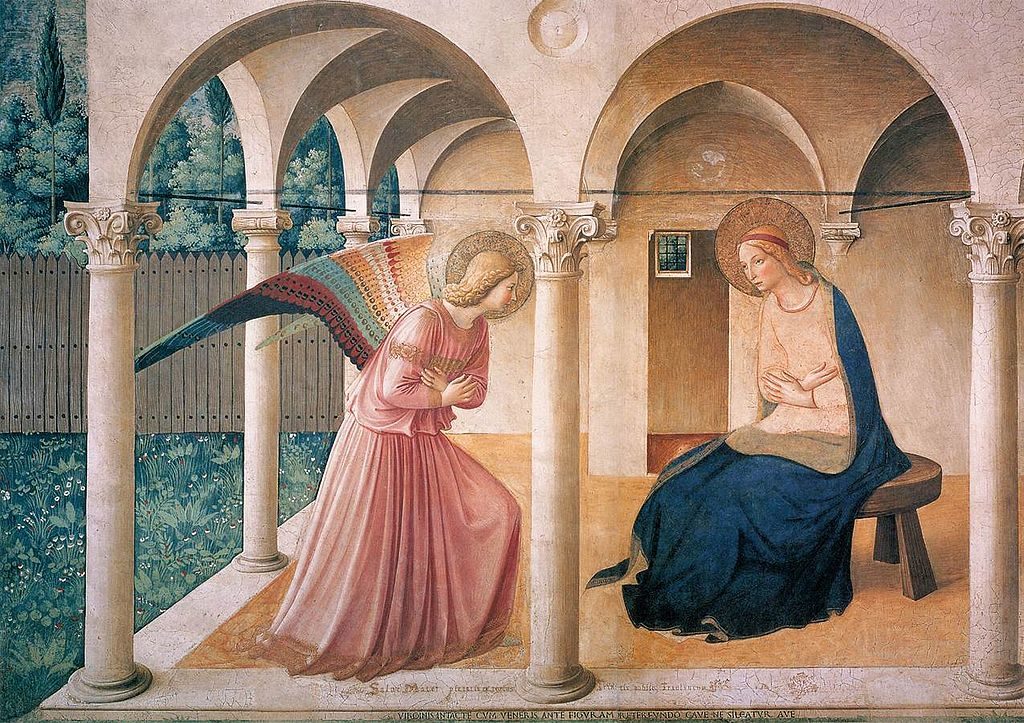 The Annunciation by Fra Angelico, Public domain via Wikimedia Commons

There are so many artistic renderings of the Annunciation moment that many of us find as devotional. Popular notions find Mary to be female, meek, and powerless. I, however, see strength.

I have been formed by the notion of the strength of Mary. I am captured by her calling and faith, her “Yes” of answer in this moment. I have always found her to be a beacon of strength and a challenge against the odds.

In these times, I find her a compelling example of discipleship. What was it like to be nose to nose with the divine and not flee the scene? Still, did she perhaps stamp her foot, in her answer, giving her own physical affirmation?

In the age of the pandemic virus, I relate to Mary whose life was up turned. She a sign of hope and partnership with an ever- present God. God visits and lifts up the lowly. God is with me in vulnerability.

One of the reflections about this encounter the has resonated with me was written by Frederick Buechner, originally published in Peculiar Treasures and later in Beyond Words.

She struck the angel Gabriel as hardly old enough to have a child at all, let alone this child, but he’d been entrusted with a message to give her, and he gave it.

He told her what the child was to be named, and who he was to be, and something about the mystery that was to come upon her. ‘You mustn’t be afraid, Mary,’ he said.

As he said it, he only hoped she wouldn’t notice that beneath the great, golden wings he himself was trembling with fear to think that the whole future of creation hung now on the answer of a girl.