At the end of 2014, I did something I never thought I’d do. I bought an online self-help course. It ended up changing my life.

There’s a backstory to those three sentences, and here it is:

I started blogging in 2012. Somewhere around that time, I found Michael Hyatt.

You might not know Michael Hyatt. This blog is largely read by Episcopalians, and he isn’t one. Michael Hyatt used to be a Christian publishing executive (he was once the CEO of Thomas Nelson), and is now an independent speaker and leadership teacher. (He’s an Orthodox Christian, for what that’s worth.)

Back in 2012, Michael Hyatt was blogging about blogging. He wrote about how to make a difference in the world through the internet.

I was pretty sure I wasn’t going to learn about blogging through the church’s continuing education opportunities. And it seemed to me that the internet mattered more than the church had yet recognized. (Virginia Theological Seminary hadn’t yet started their e-Formation conference.) So I started listening to Michael Hyatt’s free podcast. I started reading his blog.

Two years went by. In those two years, I noticed that Michael Hyatt was consistently ahead of me. He wrote and talked about issues I was working through. How do you use social media well? How do you write a blog that is actually useful to other people? How do you work effectively day to day?

He had usually given these questions more thought than I had. He would teach me something I didn’t know, or reinforce a life lesson that I needed to hear again. He occasionally tried to sell me something, but he provided useful free content whether I bought from him or not.

At the end of 2013, Michael offered an online class: Your Best Year Ever, a course he had designed to help people think through their past year and plan the next one.

Another year went by. I kept reading and listening to Michael Hyatt. He kept providing worthwhile free content. At the end of 2014, he again offered Your Best Year Ever for sale. And I thought, “I have received so much from this guy and never paid for it. This course is expensive. It might not be worth it. But if he is giving away such good stuff for free, what is he charging for?” 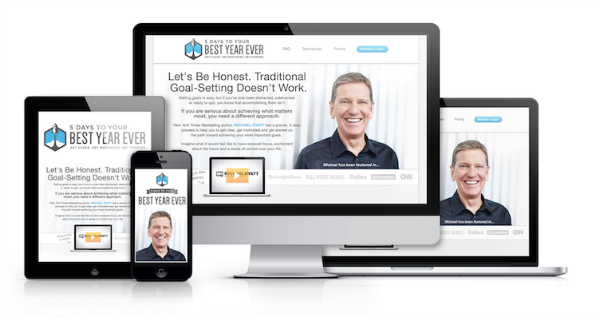 The end of 2014 found me watching videos and filling out worksheets for about an hour every morning, five mornings in a row. I asked myself questions I usually don’t slow down enough to ask: What were my real priorities as a whole person, not just my work priorities? I wrote about the year that had gone by, both its highlights and its low points. I figured out what I wanted the next year to be like, and started to plan to make that happen.

I bought the cheapest version of the class – which was almost $200, a lot of money for a part-time priest! But by the time it was over I had decided I would buy it every year. It had helped me review, evaluate, and plan for my life on my own schedule, in my own house. (When you have two kids and a husband that works a 24-hour shift, this matters.)

I still don’t have complete clarity about how I can best serve God with my life, but because of Your Best Year Ever, I have much more clarity than I used to have.

Because of Your Best Year Ever, I figured out that I wasn’t best suited to serve God as an associate priest, and left a ministry position. I engaged in intentional discernment about starting up Plainsong Farm, and began a new ministry. I realized I needed to exercise more and – well, I still need to exercise more. The course is my friend, but I’m my own worst enemy.

I’ve already bought this year’s version of Your Best Year Ever. (I got an alumni discount.) And I became an affiliate for it, because it has helped me live a much better story than I would have without it.

Michael Hyatt can be sales-y with his course offerings. If you check it out and decide not to buy, don’t let that be the reason why. It took me a full year of getting free stuff from him to be ready to pay. But once I started doing the class, I wished I had started sooner.

If you already have a way to review the year past and plan for the year to come, then ignore this blog post.

If you’re wishing for a better life, and creating one is a good investment of $200 for you, act fast. I’m an affiliate, but I’m a terrible one, and the course closes in two days.

The link to learn more and join me in the course is here.

How do you close the door on one year and begin another?