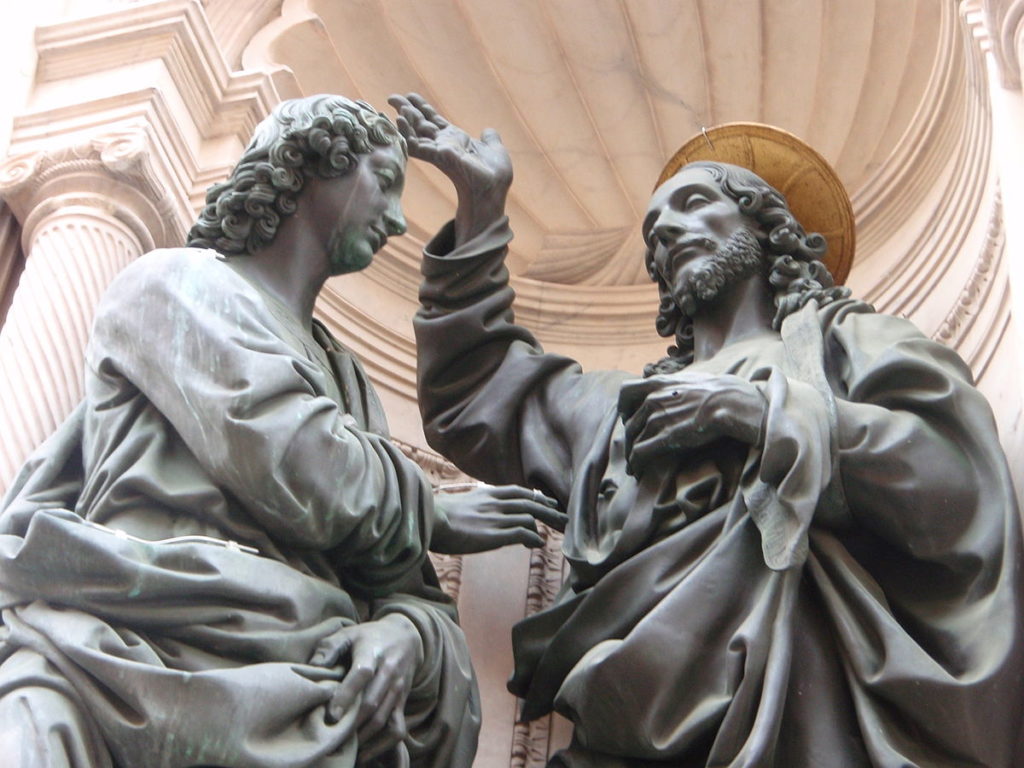 The gospel appointed for today, the Feast of Saint Thomas, picks up after Jesus appears to Mary Magdalene in the garden. She weeps outside of the tomb because it’s empty and unsure where her friend’s body has gone. Then Jesus appears before her, only she doesn’t recognize him until he calls her by name. Mary Magdalene then goes and tells the other disciples that she has seen the risen Lord. The next thing we hear from John’s Gospel is that “doors of the house where the disciples had met were locked for fear of the Jews” and suddenly Jesus appears. They can see the wounds in his hands and his side. He says, “peace be with you” and they rejoice.

Only one disciple was not there: Thomas.

Thomas’ absence already suggests that he was more courageous than the rest; the other disciples were gathered together behind locked doors because they were afraid to leave. Thomas returns and the disciples tell him that they’ve seen Jesus. He is skeptical, and who can blame him? Just a few days earlier he’d seen Jesus hung up on a cross to die and then stabbed with a spear just to be sure. “Unless I see the mark of the nails in his hands, and put my finger in the mark of the nails and my hand in his side, I will not believe,” he says.

Most of us best remember this story of Thomas as the poor disciple who did not have enough faith to believe without seeing the resurrected Christ for himself. We know this disciple as “Doubting Thomas” even though his reaction is quite similar to the other disciples in Luke’s account of the resurrection. When the women told the disciples their experience at the empty tomb, Luke says, “But these words seemed to them an idle tale, and they did not believe them.”

We give Thomas this unearned name, but Jesus does not. Jesus understands that sometimes it’s difficult to have faith. He doesn’t scold or question Thomas; instead he offers Thomas exactly what he needs in order to believe. Jesus allows Thomas to place a finger in his wounds and when he does, Thomas fully realizes that Jesus is not dead. More importantly, the relationship Jesus and Thomas share is not dead.

This is not a story of judgment and reprimand; it’s a story of hope and promise which is fitting as we prepare for the Christmas season. There is certainly a parenting lesson in here.

Yesterday my eight-year-old son begged to play at a new neighbor’s house and my simple yet firm “no” was not enough for him. I knew why I didn’t want him to go over there. I don’t know his parents nor the caregiver who watches the children after school. I haven’t asked about unlocked guns in their home, which is something we ask before our kids ever visit another house. I didn’t want him playing the specific video game he wanted to play at their house. I had my reasons and as a parent felt I didn’t need to list them. But a result, my son just kept asking why, as he sought to fully understand my rationale.

What would it have looked like if I understood his “but why, Mommy?” questioning as his path to believing me, just as Jesus understood Thomas’ request to see and touch the wounds with his own eyes and fingers?  What if we as parents joyfully welcomed each persistent pursuit of knowledge from our children rather than dismissed them as attacks on our parental authority or aggravating, infantile behavior?

This week we are all spending extra hours with our children, during a time when we ask them to trust us and have a lot of faith.  Let’s take advantage of their curiosities by meeting them where they are and seeking truth together.

What do you learn from Jesus about family relationships?