During Lent this year, our church decided to start using the “modern” version of the Lord’s Prayer.  I think it was to help keep us on our toes as a congregation, lest we fall into liturgical complacency.   Now, I wasn’t raised an Episcopalian (and only nominally Christian at that), so I didn’t even know there were two versions of the Lord’s Prayer.

During Lent this year, our church decided to start using the “modern” version of the Lord’s Prayer.  I think it was to help keep us on our toes as a congregation, lest we fall into liturgical complacency.

Now, I wasn’t raised an Episcopalian (and only nominally Christian at that), so I didn’t even know there were two versions of the Lord’s Prayer.

I mean, THE Lord’s Prayer was the ONE thing I was able to do without confusion that very first service my husband and I attended, a beautiful Easter Sunday in 2012. I hadn’t attended a church service of any kind that wasn’t a wedding in years, but the words of the prayer spilled effortlessly out of my mouth without even referencing the Book of Common Prayer:

Our Father, who art in Heaven, hallowed be thy name…

You can’t deny how beautiful it sounds. 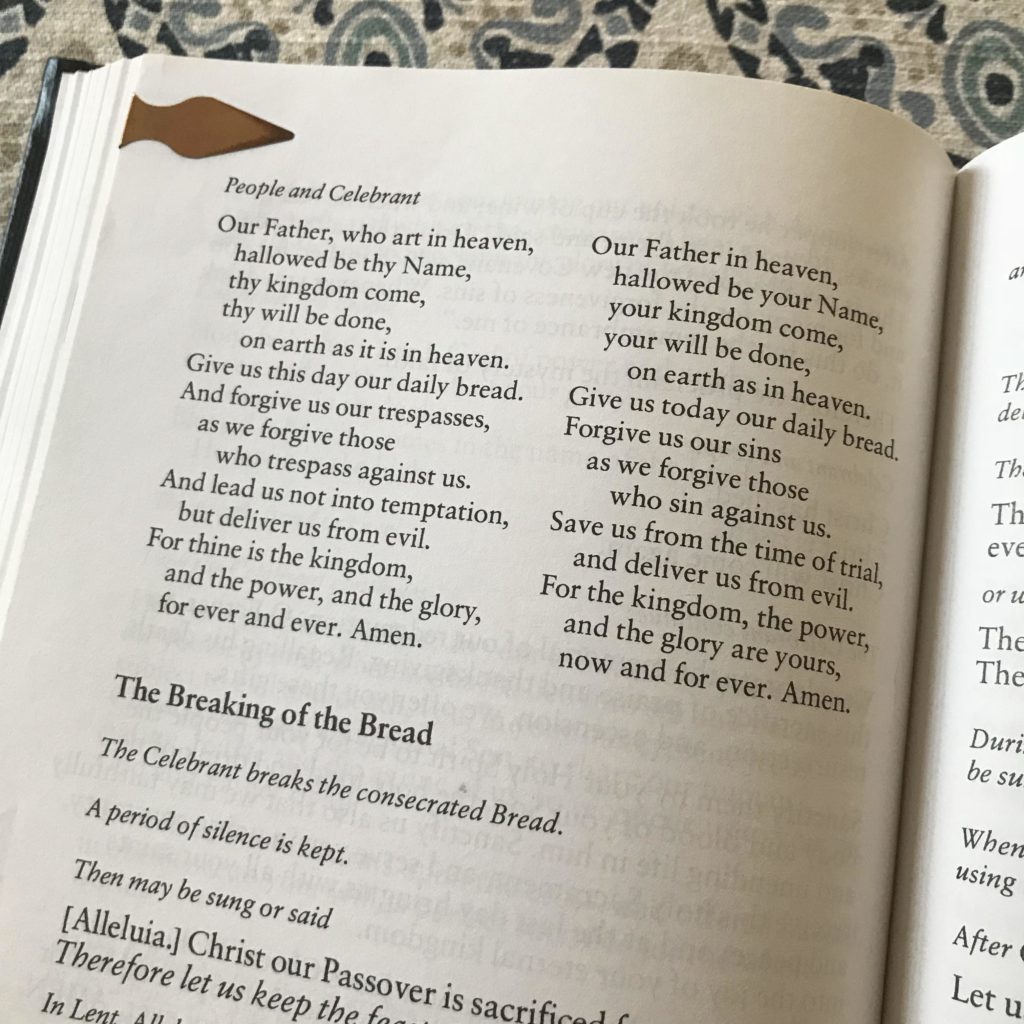 We joined our church, I was baptized, and I remained oblivious to the modern version of the Lord’s Prayer for six years. Until Lent of this year. And I’ll admit to sort of shrugging with ambivalence and dutifully reading the words of the modern version at the appointed time.

We’re a fairly low-drama parish and the traditional-to-modern switcheroo seemed to go over pretty smoothly, so they decided to keep using it after Lent was over. We now say the modern version of the Lord’s Prayer as part of our Eucharistic prayer every Sunday.

Well thank goodness they print it in the bulletin, because I still don’t have it memorized.

I’m generally pretty good at memorization and recitation. I was able to recite our frequently used prayers and the Nicene Creed without referencing the text after about a year of regular worship. I suppose that because I learned the traditional version of the Lord’s Prayer as a child is what makes it so deeply ingrained in me, which means it will take active mental effort to replace one version with the other.

To put it another way, the neurons in my brain are going to have to work harder to rewire this already well-established pathway.

It’s funny that I should bring up neurons in an essay about the Lord’s Prayer, because, as it turns out, I just had brain surgery to remove a large tumor less than three weeks ago. Yup. True fact.

And because I’ve been recovering from said brain surgery, twice now I’ve been the recipient of “Communion under Special Circumstances” when one of our parish priests has brought it to me at the hospital and my home.

The Lord’s Prayer is a part of this brief service and I have a vague-ish memory of stumbling through the modern version with our rector while in the hospital. Earlier this week our other priest visited me at home and when we got to the part where we were to say the Lord’s Prayer together, I asked quietly, “which version?” She offered me the choice and I went with traditional, because I knew I could say it with confidence.

And lead us not into temptation…

Brain surgery can make a person think about things, and now I wonder if my over-reliance on the the traditional text has something to do with the small and narrow perspective of Christianity that I carried with me from childhood, right through my baptism, and multiple years into my life as an active, trying-to-be follower of Jesus. “Let’s try not to do bad things and and sin” is how that part of the prayer slotted in.

In just the past year, many things came to pass that germinated the seeds of a new understanding in me, and I was starting to realize that things were not perhaps as I had always assumed them to be. So… that got me to thinking and I went back and looked at the words of that pesky modern version more closely:

Save us from the time of trial…

I have no doubt that what my family and I are going through right now qualifies as a Time of Trial.

And DARN if this isn’t really hard. And God didn’t stop it from happening to us. But these past three weeks we have witnessed miracles big and small that have been simply revelatory.

Reading that line and whispering those words in the early morning quiet when I shuffle restlessly around the house while others sleep, I know with the full confidence that only God’s grace and love can give me, that we yet are saved.

For thine is the kingdom, and the power, and the glory, forever and ever. Amen.

But just you try to pry those words from my lips.

During Lent this year, our church decided to start using the “modern” version of the Lord’s Prayer.  I think it was to help keep us on our toes as a congregation, lest we fall into liturgical complacency.   Now, I wasn’t raised an Episcopalian (and only nominally Christian at that), so I didn’t even know there were two versions of the Lord’s Prayer.