“But we already went to church today!” my son said plaintively. “That’s right,” I replied, but “it was my church; now we’re going to mommy’s church.” My son, looking confused, gradually fell asleep in his car seat.

At least I didn’t have to explain the Reformation yet!

In a time of heightened racial, religious, and political tension, my family blends all three areas. I’m an Episcopalian of Chinese, Scots-Irish, and German-American ancestry. My mom and dad are ardent democrats who rarely attend church. Marie, who’s of western European extraction, remembers growing up with conservative pundits playing on her parents’ radio and attending Catholic Mass at 7:30 every Sunday morning.

Neither Marie nor I felt called to convert to the other’s church. Instead, we have brought both into our marriage and family life. Our wedding was at Christ Church Cathedral in Houston with an Episcopal priest officiating and a Roman Catholic priest assisting. We also had some familiarity of each other’s faith tradition. She attended Sewanee: The University of the South, an Episcopal institution. I attended Catholic parochial school and then the nation’s oldest Jesuit high school.

Raising children, though, has stretched and at times challenged our understanding of what it means to belong to our own church community and while participating regularly in another.

We wanted an ecumenical baptism for our son. To get there, we researched our churches’ rules and practices, and then discussed with our pastors what each would allow. As it happened, the sacrament of baptism (Roman Catholic) took place during Morning Prayer (Episcopal Rite One).

Fast forward three years: these days just getting the kids to church before the gospel reading is a win! Our son is bright, energetic, and talkative – not always the easiest recipe for a 75 to 90 minute Episcopal worship service.

We’ll usually approach the altar together in an Episcopal parish. But when our family attends Catholic Mass, I wait in the pew or narthex with my infant daughter while my wife and son walk up together, because non-Catholics are not allowed to receive communion. While being separated at the Lord’s Table is painful, I am encouraged by discussions about potentially opening communion to more non-Catholics, especially spouses, on a case-by-case basis.

I do wonder though, will my children receive sacraments in both churches as they grow older? Will they feel compelled to choose between two church communities or will they gracefully grow in both? Will divisions within the Body of Christ on Earth hinder or inform their faith? How may my family members and I, as a “domestic church,” be heralds of Christian unity?

At home, we’ve introduced table graces before dinner with a “prayer cube”, and our son can choose a prayer each evening.

This is his favorite prayer. 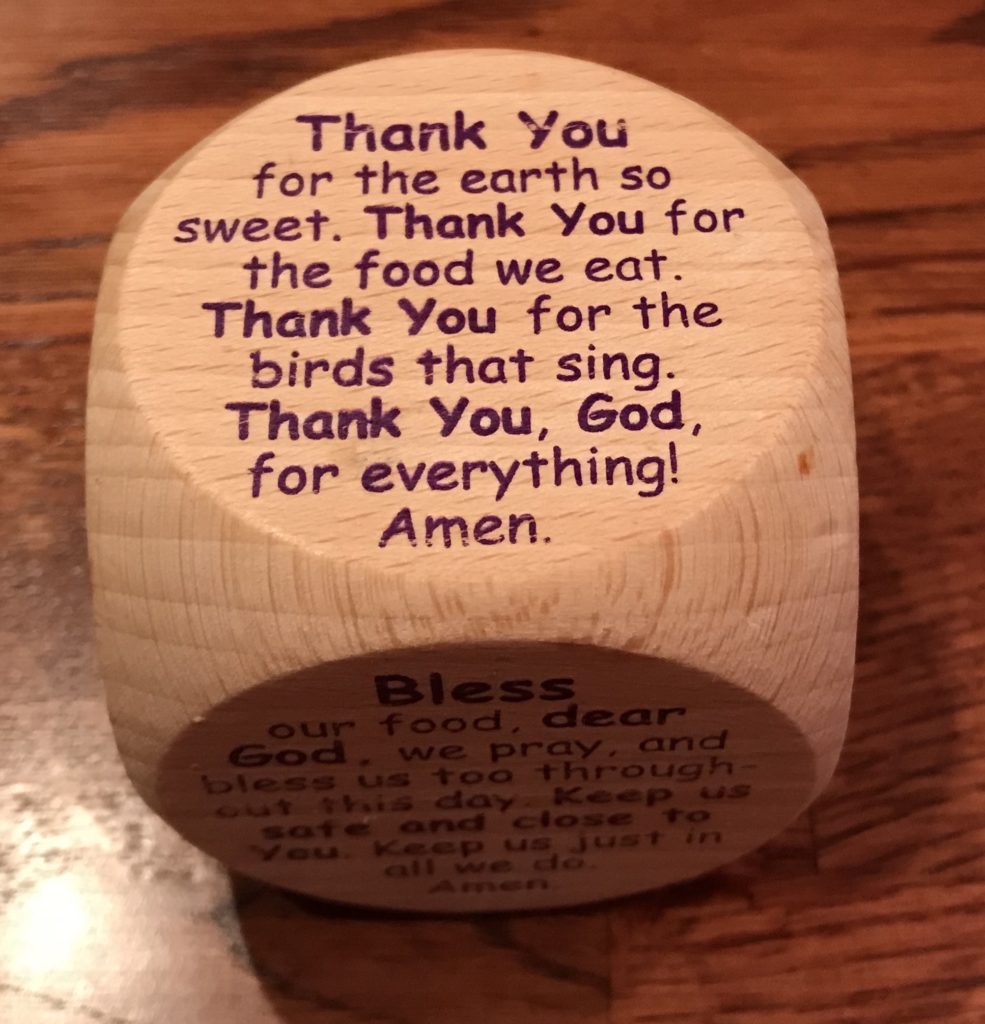 To truly be thankful for everything, Marie and I not only celebrate what we have in common as followers of Christ; we acknowledge what we don’t. Personally, I believe that our church communities, with their own gifts and flaws, still can learn much from each other. Ultimately, we are one Christian family from two traditions; thanks be to God!