In anticipation of leaving our children for a period of four days with their stalwart grandparents, my husband and I prepared all the things: favorite foods, clean clothes, an abundance of diapers, phone numbers of every single person within a ten-mile radius who would come if the tears wouldn’t end, either of our children or my parents. We left trails of paperwork and gave oration-length verbal advice.

As we moved towards the door, bags in hand, I recall looking at my dear, kind, deeply pragmatic parents and offered a suddenly-realized pearl of wisdom about our then-almost-four year old daughter: “Don’t use reason. She will not be rational. Seeking a reasonable response from her will only end in disappointment, mostly yours.”

They chuckled then. But by the time we came home, they were believers.

As a card-carrying adult, I often pride myself on my reason. As an Episcopalian, I rely on it, as one whole leg of my ‘three-legged-stool.’ Being sensible, practical, rational and reasonable are tried and true merit badges for citizens.

But children—and yes, my experience is entirely in the 3 to 5 year old range—are not beholden to reason or rationality. They see completely differently, experience viscerally, imagine greatly, in a way which is entirely contrary to my own notion of order, sensible as it is. Some of this visceral experience can be otherwise described as ‘lying on the floor in a fit of tears over the wrong shopping cart at Target,’ making that line between ‘visceral’ and ‘feral’ quite thin. But in other cases, it’s what makes the art, the stories, the songs, dances, even the outfits of my daughter so entrancing. She isn’t hemmed in by the lines I, myself (proud card carrying “adult”) have chosen to live within. 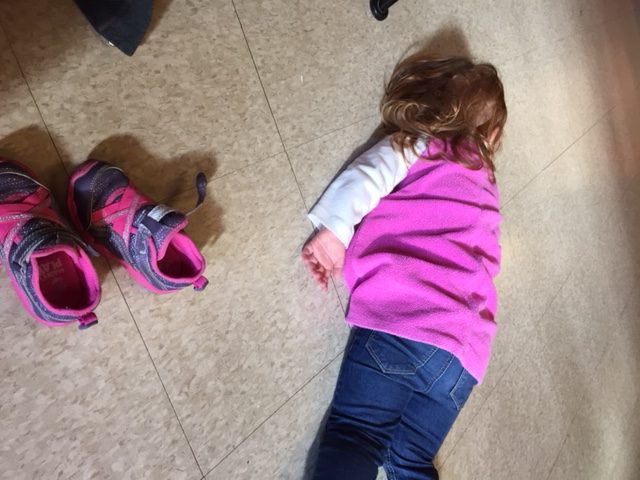 My daughter experiencing the closeness of God on the floor of Target.

Teresa of Avila, mystic, abbess, reformer of religious life, walked that thin line between pragmatism and ecstatic experience. Born into a large family in 1515 in Spain, losing her mother at fifteen, and enduring a debilitating illness while newly admitted into a convent at age twenty, Teresa’s illness provoked in her a deeper devotion, manifested again and again not only by prayer, but the deep stillness of silence, and ecstatic visions.

Her hope was not for simply a closer relationship with God, but for union with God. In a series of visions over two years, Jesus Christ presented himself repeatedly to her (though invisible to others), and she was struck in the heart by the lance of a seraph. For her, enclosure, silence and discipline were the means for these visions to continue, and they did.

It was during one of her phases of writing that she wrote one of our oft repeated verses:

The many visions of Teresa were incorporated into her book, The Interior Castle. Her understanding of the thin space between God and ourselves, and the presence and openness it demanded, not of our intellect and minds grasping at theology, but the very nearness of God and what that could do to a soul—well, that is part of her legacy, and ours. Her concern was not the rationality of God, but the experience of God. Not the expansive providence, but the interior journey of union with the divine.

Back to the Target aisle with my four-year-old daughter.

My deep delight would be in seeing my preschooler with church bulletin in hand, carefully following our order of service, listening to the children’s sermon, carefully sticking to the shopping list at the store…a child who thinks and behaves just like me.

The delight I receive is a child who dances in the background to the hymns and postlude. Who will roll around in the Target aisle in a pout, but then once on the ground, discover the perforation pattern on the lowest shelves and suddenly call me over to see if I can see the flowers in it. A child for whom reason is a pair of too-tight sneakers, easily kicked off and abandoned somewhere else, most likely “back there somewhere”.

Today on her lesser feast day, Teresa of Avila reminds me that my adult pragmatism and reason can make me a “gloomy saint” at moments: narrow and hemmed in to form. But the joy of God, the delight of God, can render me childish for a precious moment—a soul discovering God’s presence right here, right now.