In America, we use angels to sell pretty good toilet paper and terrible lingerie. We’re not much for the six-winged terror holding a burning coal to the prophet’s lips (Isaiah 6:2-7). We prefer fat cherubs with harps to sentinels with spinning, flaming swords (Genesis 3:24). Our angels aren’t divine messengers, and they don’t start their sentences with, “Fear not!” They are boring and uncool.

This is what your cranky pastor said in an Advent sermon. I’ve heard that sermon, and preached it a few times too. The message boils down to this: we like to tame God, but God is too freaky for that.

What I haven’t heard (or preached) is the sermon defending the idea of angels. Maybe I’ve been so struck by how cool they are that it never occurred to me dismiss them. I mean, they fight dragons, wrestle, and break stuff; who can’t get with that? But then I read a commentary this week that wrote off the whole idea of angels as “make believe.” To be fair, the author embraces make believe as something good and important, a way of describing our deepest hopes in a compelling way. But he is clear that angels are imaginary, an idea without “the ring of substantiated proof.”

I wonder what would satisfy that author. What would qualify as substantiated proof? Contemporary biblical witnesses attest to angels. Centuries of Christians have recorded their experience of them. Nothing about them is inconsistent with the broader message of scripture. The idea of angels seems to enjoy the same degree of proof as Christ’s resurrection.

There’s also no disqualifying evidence. If you want to read the creation story in Genesis literally, you have to reckon with the geologic record. If you claim that Jesus rose from the dead, you have to reckon with the evidence that dead tissue decays and does not tend toward life. But there’s no evidence against the existence of angels apart from the fact that you may not have seen one. Why dismiss it so easily?

If God is real and truly wants to be in relationship with us, then surely God can communicate with us. God does so through our reading of scripture, in the intuition of prayer, and, we trust, through the teachings of the Church and the faithful who have come before us. So why not angelic messengers? 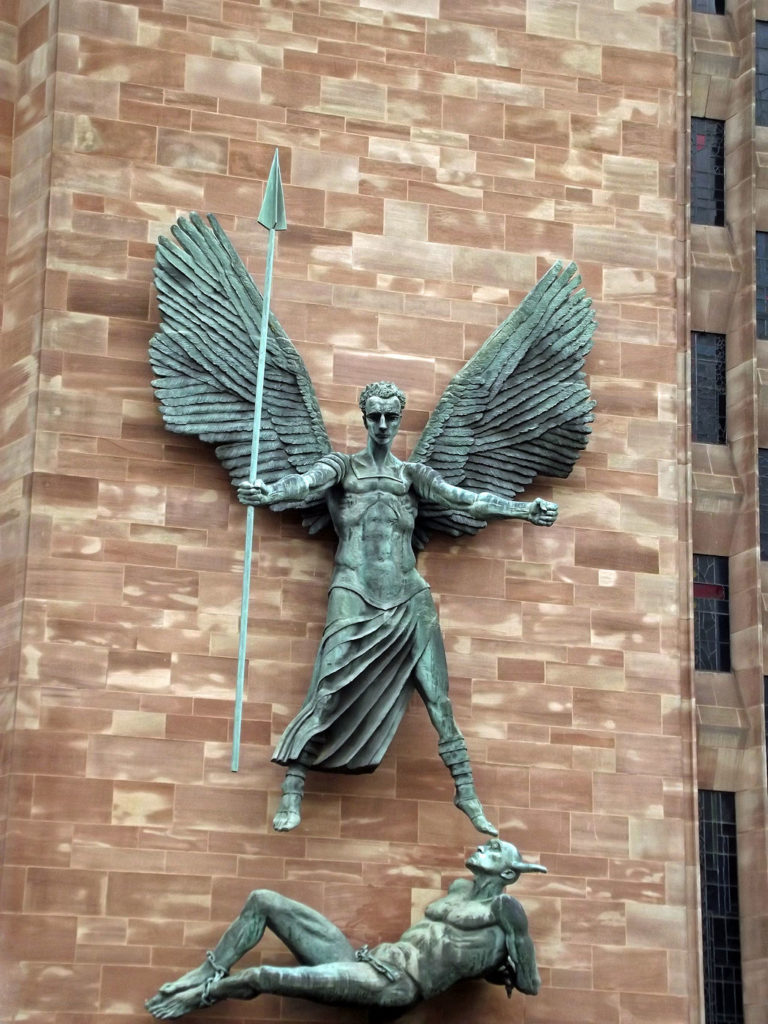 Holy Women, Holy Men, the Episcopal Church’s Monster Manual calendar of commemorations, keeps the definition of an angel broad: “Messengers from God can be visible or invisible, and  may assume human or non-human forms.” That can be interpreted pretty loosely, to the point that we view a kind deed from a stranger or an encouraging word from a friend as a message from God, and the messenger as an angel. I’ve experienced that.

But let’s not sell God short. God can do bigger, weirder, cooler stuff than speak through other humans. People tell amazing stories about the strange force that pushed them back right before the bus flew by, the voice that told them to check on the kids one more time, or the hospital visitor no one else saw. Crazy stuff happens.

It doesn’t happen every time. Sometimes we want a message and don’t hear one. Sometimes we want God to do something and it doesn’t happen. Sometimes God answers our prayers with a no. But if what we say we believe about God is true, then yeses can happen too. God can show up and do things far beyond our understanding. An angel can speak just the right word, kick the world in just the right spot, to give a prophet speech, a child strength, or a broken body healing. Why settle for make believe when you can have that?