I used to live on Quintard Road. It’s named for Charles T. Quintard, one of the patron saints of Sewanee, Tennessee. He was the second Episcopal Bishop of Tennessee, and the first Vice Chancellor of the University of the South. (Despite the title, the Vice Chancellor is the head of the university. Sewanee likes to keep you guessing.) Quintard did a lot for Sewanee, and according to A Great Cloud of Witnesses, the Episcopal Church’s book of commemorations, he did a lot for education in general.

He also did a lot for the Confederate States of America.

Before he was a bishop, Quintard was rector of the Church of the Advent in Nashville. In 1860, before the war broke out, he was elected chaplain of a local militia known as the Rock City Guard. Quintard later wrote that “this election was only a compliment”[1] and that he was “chaplain only by courtesy.” It seems he was not a firebrand secessionist; when he officiated at the Rock City Guard’s Thanksgiving service that year, the title of his sermon was “Obedience to Rulers,” and he described it as “a strong plea for the Union.”

His plea didn’t last long. When Tennessee seceded seven months later, the Rock City Guard was merged with six other militias to form the 1st Tennessee Infantry Regiment. Charles Quintard agreed to stay on as their chaplain, and together they entered the Civil War.

Quintard was a born Yankee. He grew up in Connecticut, but he came to be known as the Chaplain of the Confederacy. He even compiled The Confederate Soldiers’ Pocket Manual of Devotions.

As Christians, what do we make of this minister of the Gospel defending slavery? Do we give him the benefit of the doubt, as people have been doing for Confederates since 1865? Perhaps he was loyal to the men who elected him their chaplain and simply wanted to be their pastor, to bury their dead and tend to their wounds (he was also trained as a surgeon). But look at that Pocket Manual and read the first entry. It’s an excerpt from Frederick William Faber’s poem The Right Must Win:

For right is right, since God is God
And right the day must win;
To doubt would be disloyalty,
To falter would be sin.

It’s pretty hard to give him the benefit of the doubt. Once you tell the soldiers God is on their side, you’re all in. Better, I think, to let his participation in the Confederacy stand than try to justify it.

So Bishop Quintard is complicated. He supported an armed rebellion founded on the defense of chattel slavery. And later he did a great deal of good. He was the first Episcopal bishop consecrated after the war, and his ordination was a symbolic reunification of Northern and Southern bishops. (Have you ever heard anyone claim that the Episcopal Church was the only denomination not to split during the Civil War? Google “Protestant Episcopal Church in the Confederate States of America.”)

In Tennessee, he took on the monumental job of rebuilding the diocese after the Civil War (only three Episcopal churches in Tennessee survived the war without being damaged or destroyed). He raised money for the University of South. He was opposed to segregating churches. He helped found Hoffman Hall, a seminary for African American men. Like I said, complicated.

This post is supposed to be about discipleship and kids and parenting. What does Quintard have to do with that? He certainly can’t be boiled down to a child-friendly object lesson like Florence Nightingale, Saint Francis, or any number of other folks in A Great Cloud of Witnesses.But he may be helpful as a prompt to some open-ended questions.

How do you do the right thing after doing the wrong thing?

What’s the best way to show people you love them?

What does it mean to forgive?

For teenagers you could frame the conversation in terms of grace and redemption. A family or youth group might even put these questions in a hat and draw one out for discussion at dinner or a meeting.

We might also challenge the very human tendency to reduce people to a single characteristic. Young children like to know who the good guys and bad guys are in stories. It makes things easier to follow. Maybe Quintard can invite us to ask whether that’s a good thing. 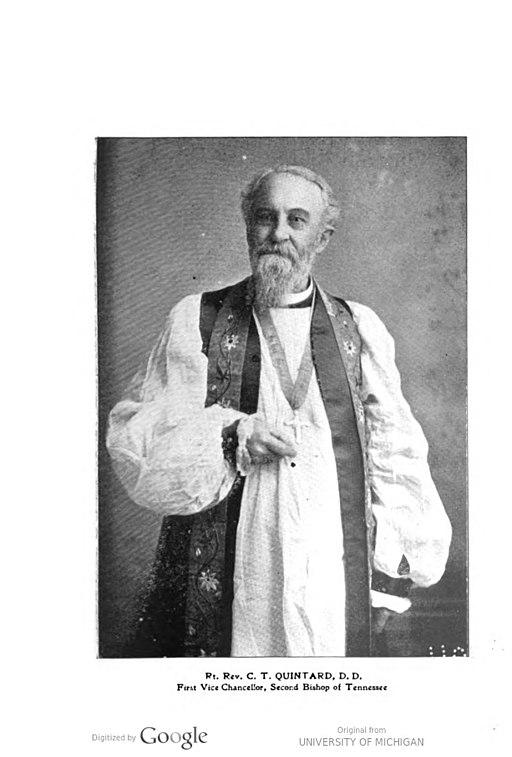 In the end, the word complicated does not nearly do justice to Charles T. Quintard. I don’t know if any word can. But maybe this does: My family and I have benefited from Bishop Quintard’s legacy. I attended St. Andrew’s–Sewanee School, a school he helped found. It is a loving, grace-filled community that shaped me deeply and gave me an excellent education. My children were immersed in that community for four years when I was the school’s chaplain. Some of my former students are like brothers and sisters to them. And if Bishop Quintard’s side had won the war, several of those brothers and sisters would be enslaved today.

I consider that and all I have are questions—about evil, forgiveness, transformation, and grace. They’re questions with no easy answers. But they aren’t going away. They are our inheritance, and one day we will pass them on to our children. We can pass the questions on as they are now, unanswered and seemingly unanswerable. Or we can ask them of ourselves, unflinchingly, and ask God’s help to accept the answers we find. They will likely be difficult, even painful. They will surely be complicated. But they will be honest, and a far better inheritance.