We have sterilized the cross. What began as a device of torture and execution now adorns bejeweled necklines, book jackets marketing to Christians, and all manner of art and decor. Crosses have come to symbolize cultural identity rather than piety or devotion. And they stand even further from the fear, torture, and death for which they were intended.

Yet each fall, as reliably as the onslaught of pumpkin spice flavored goods appearing on menus, comes Holy Cross Day, a major feast day of the Church’s calendar; an opportunity to reflect and renew our vision.

Holy Cross Day draws its history and significance from the discovery of a relic of the historical cross of Jesus outside Jerusalem in the 4th Century, and the subsequent dedication of a church on that site by Emperor Constantine in 335 CE (The Church of the Holy Sepulchre). The 1979 Book of Common Prayer was the first American prayer book to include Holy Cross Day among the festivals of the Christian year, however its has been commemorated in the Eastern Orthodox and Roman Catholic Churches for centuries longer.

On Holy Cross Day, we pray in the collect appointed for the Feast that we “may have grace to take up our cross and follow [Jesus]” in response to Christ’s “drawing the whole world to himself” by his death on the cross.

Initially, the prayers and concepts of Holy Cross Day may seem nothing more than elementary discipleship. We must work (often sacrificially) to follow in Christ’s footsteps, and carry his message of love and salvation alongside us. It can seem like nothing more than living our faith aloud—the Great Commission and the work of evangelism. However, the collect accompanying the feast, and the history of the festival itself, invite us deeper.

I take up my cross and follow Jesus because I have been drawn to Christ upon the cross. It is an invitation to intimacy and closeness with the one who accomplished salvation for the whole world, ourselves included. It is an intimate encounter with agony, shame, humiliation, exasperation, and finally with death itself. Christ who was lifted high on the cross invites us to an encounter with the most unpleasant and painful parts of humanity—the device of torture and execution—an encounter with death itself.

I have come to believe that salvation only reveals the fullness of its hidden joys on the other side of such encounters. The passion stories of the gospels, Holy Week liturgies, icons and artistic renderings of the story, these are sign posts and guides to understanding salvation. The fullest understating relies on our willingness to look closely and see with our own minds and hearts the excruciating truth that Christ hung high on the cross, and to consider closely betrayal, torture, and death which are ultimately swallowed up by God in the transformation of resurrection.

Our willingness to be drawn into the depth of Christ on the cross is integral training for the Christian life. We go deep not to wallow in morbidity, or traumatize ourselves with scenes of torture and agony, as if we are looking to be entertained by a horror film, but as a way of seeing hope emerge and a new story written. 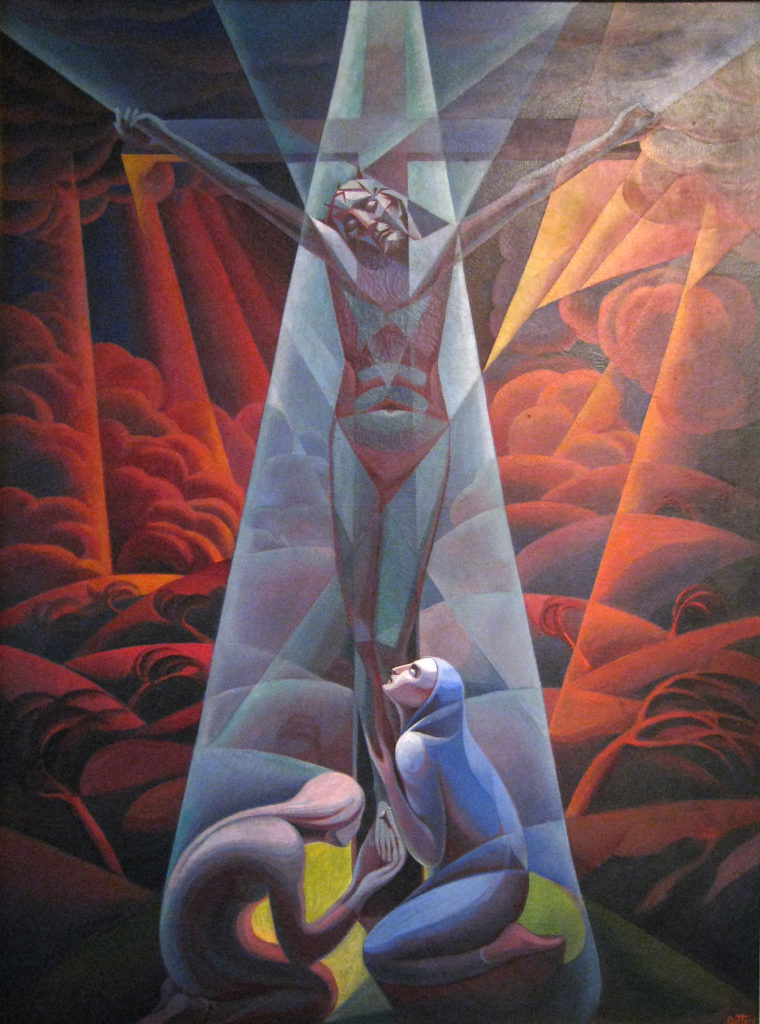 When we can face the truths of Christ and the cross long enough to see resurrection emerge in the distance, then we can face our own moments of grief, pain, and loss until hope emerges.

For the parent or spouse who has just been served divorce papers, facing the grief of losing their family as they knew it can reveal God’s gracious and comforting presence to guide them through the journey that lies ahead.

For the patient staring deeply into a bag of chemotherapy drugs being pumped into their body, facing the uncertainty and desperation of a diagnosis can reveal God’s hand in the healing and comfort of their bodies as they fight the disease.

For the teacher or social worker who sees the tell-tale signs of abuse on a student’s body, facing the anger and sadness that come from unanswerable questions, can reveal the depth of our frailty to comprehend human brokenness, and our powerlessness against the forces of evil around us. It can lead to a deeper reliance upon God’s mercy and care.

Staring deeply into Christ fixed upon the cross and turning our attention to its hardship and pain will always lead us to glimpses of resurrection if we remain patient. So much ink has been spilled in parenting books and articles on raising children who are resilient or have “grit” in their psychological makeup. The Christian story of salvation, and our practice of Holy Cross Day just might contain a strategy for such resilience and grit. Facing pain, feeling loss, witnessing betrayal, and staying in the encounter to see resurrection and hope emerge— that might be the best strategy for resiliency I can imagine.

[Image Credit: Dottori, Gerardo, 1884-1977. Crucifixion, from Art in the Christian Tradition, a project of the Vanderbilt Divinity Library, Nashville, TN]