I do not know when I moved from having a few creches to having a collection, but it was somewhere between having two and then forty. I still remember my first creche; it was an ordination gift thirteen years ago from a few cousins. Then, I went to the Holy Land and came back with another, and then I received a few more as gifts… And now I have a collection. The basic ones include simply the Holy Family. The next step up include animals, and then some include shepherds and angels. Finally, the most substantial sets include Magi. 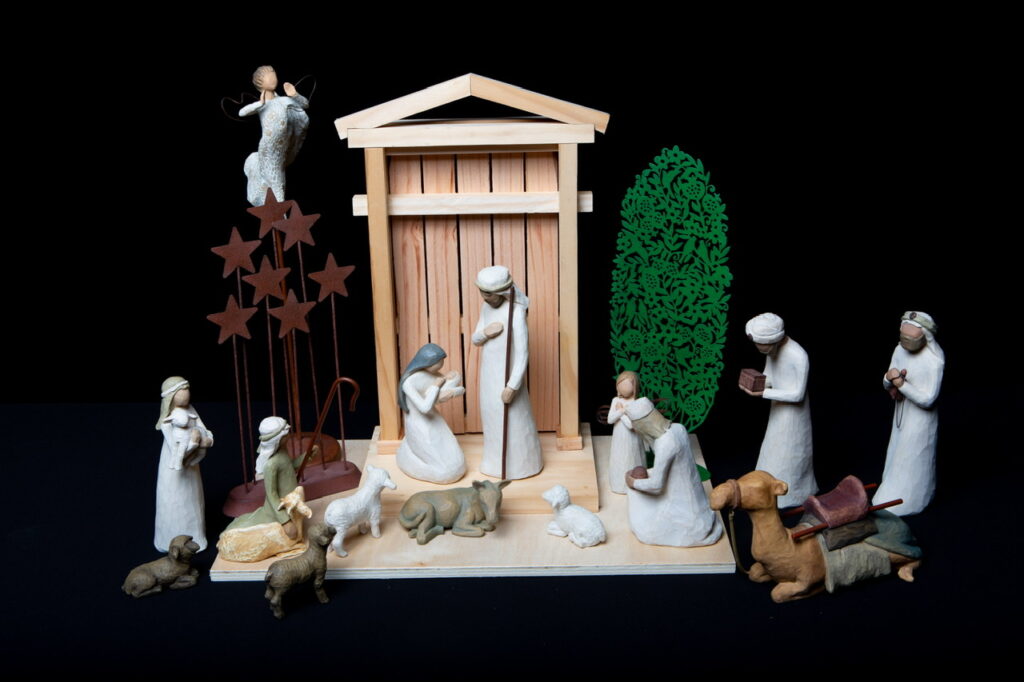 The first creche I received with many additional pieces that have been gifted to me over the years.

What began as a personal interest has become a fun family activity. The collection now includes several kid friendly creches – plush, plastic, and wood – that even the youngest hands in our household can handle. The kids help unpack and display the creches each year. They ensure the baby Jesuses remain safely in the cupboard until Christmas morning and move the Magi closer and closer to Mary and Joseph throughout Advent and Christmas.

This year my son wondered why we do not do something similar with the sheep and shepherds, since they should not show up until after Jesus is born! We don’t simply look at the creches on display, we play with them and move them, helping the children take the story in. It is a wonderfully embodied way for them to “learn and inwardly digest” the biblical story, as the collect put it a few weeks ago.

Creches tend to be a form of folk art, an art form deeply rooted in a local culture. In the santons tradition of France, the hand painted clay pieces of the traditional creche scene are placed within a local village with villagers either living their normal lives or traveling toward the manger. My small santons creche has two villagers, one carrying a lamp and the other a bundle of sticks. 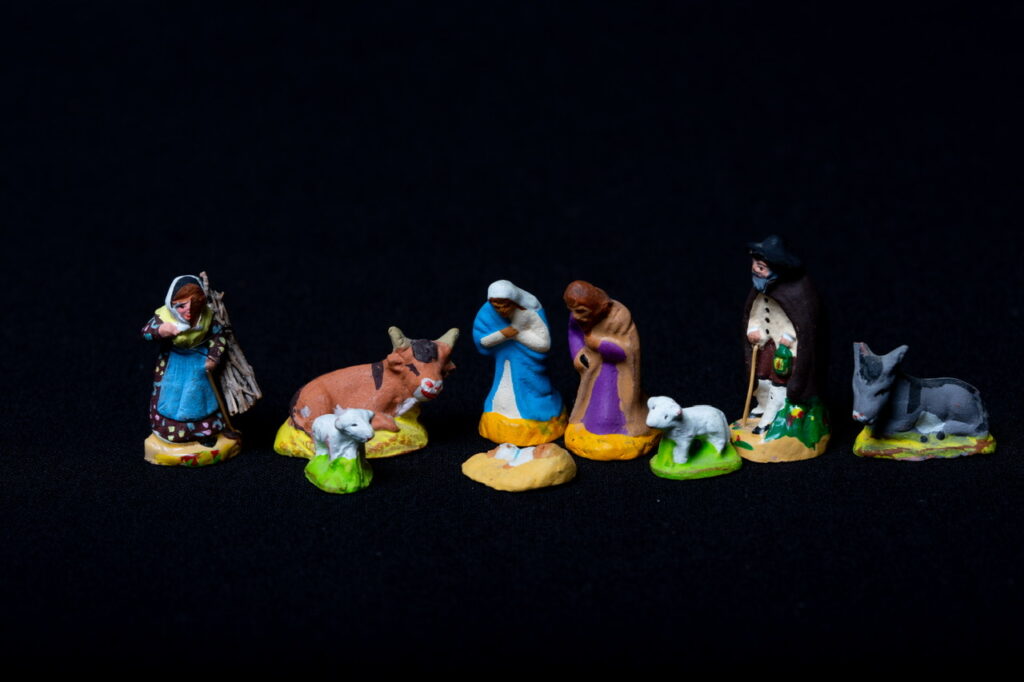 My santons creche, a precious gift from my mother-in-law, who purchased it in France when she was a young adult.

I have creches from most continents – Asia, Europe, Africa, and the Americas. These creches do not include villagers in the same way as the santons tradition, but they do incorporate local elements either in material used or in the visual representation. To give but a few examples: Olive wood and Bethlehem wool were used to make some that I purchased on a pilgrimage to the Holy Land. Crafting with the pages of a local magazine were used to make one from Vietnam. Visually, the characters in one creche are wearing traditional Palestinian outfits, while the characters in a couple of others are wearing indigenous Andean outfits. The Magi in one creche bring corn, eggs, and bread. Across the collection, the various characters represent many different races and ethnicities that reflect the people who made the creches.

Theologically, the creche tradition is a beautiful visual representation of incarnation. Yes, God became flesh in a particular time and place two thousand years ago in Bethlehem, but scripture teaches us that the Christ is not limited only to that one particular moment and time. Christ is incarnate in our particularities as well. The creche scenes remind us that while the historical Jesus was a first century Palestinian Jew, the incarnation transcends that one moment. Christ is with us as an indigenous baby from Peru or a black infant in Kenya. Mary gives birth to the light of Christ in France and Indonesia. Joseph cares for Jesus in Uganda and the United States. The Magi bring not only Gold, Frankincense, and Myrrh, but corn, eggs, bread, and whatever gift you have to offer as well. The creche tradition nudges us to find ourselves in this story, and to find the story in ourselves.

Setting up a creche in the home also reminds us that Christ is present with us now. The santons tradition grew up in the wake of the French Revolution when churches were closed and the great public nativity scenes were banned. So people secretly made and set up creches in their homes. We do not face religious persecution, but instead a virus that keeps sending us back to our homes, asking us to celebrate our faith there this season. The creche is one way my family will do that.

What creches do you have in your home?

[Image Credit: All photos of the creche collection were taken by Carl Davaz and used with permission]