Saint Cecelia and Saint Agnes are known for contributions to the church writ large, one contribution being how they have inspired the women who came into the church after them. Saint Agnes is known as a patron saint of girls, while Saint Cecelia is known as a patron saint of music. While both modeled devotion to the church and prayer, they specifically have served as images of representation for other saints, even such saints as Julian of Norwich, who have been able to see the calling of God within the strength of their stories.

After meekly leaving fundamentalism, I joined the Episcopal Church in college. In those years, I walked the one tender path of both growing my frontal cortex and the belief that I, even as a woman, might be able to think for myself. I did risque things like change my major to English and read the Bible as literature. As I became more settled into my place within the pews, intellectually I began to celebrate the Episcopal Church’s ordination of women. I had long felt called to ministry and I felt at home in a church that thought women like me could be priests. That said, if asked, I would have told you that I personally did not feel called to priesthood.  I had felt called to ministry. I was told no as a fundamentalist, and either my sensibility or biological trauma responses had for many years guarded me against having that conversation again.

It was only when I walked into a ballroom at a diocesan convention that I scanned the room, stopping along the way to notice that there were women in collars. Women…in collars. Like my priest wore. But they were women. I was in a room that had clergywomen. It was not a theoretical belief that I aligned with; it was not an intellectual position that I held. The ordination of women was an incarnate truth. I did not have to defend whether or not I was called to my ministry; I could look into the ballroom and see the living witness to the fact that regardless of who supports it, my calling existed in the world. It wasn’t until I was offered the living, breathing presence of clergywomen that I believed my priesthood was a possibility. Possibility became discernment and, bishop and people consenting, I am now a priest. 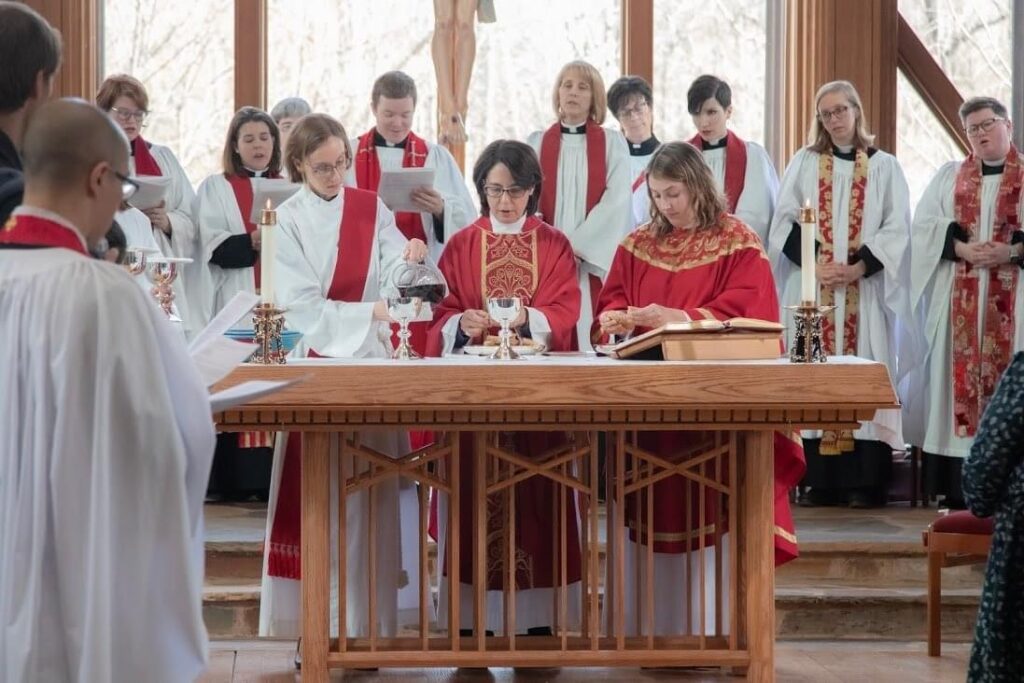 I like to imagine Cecelia and Agnes serving as the proverbial women across the ballroom for saints like Julian and others, proving through their very existence that the world of spiritual teaching and arts could be led by saints such as themselves in that age and in the ages to come. There is an outpouring gift presented to the Church when someone steps into their ministry now, because it calls us into the grander unfolding of God’s time. As each stepping into now simultaneously falls down into the well of the saints, like Cecelia and Agnes, who created the present opportunity through their willingness to create a future differently, even through risk.

In this present time, we are called into figuring out the steps God is asking us to take into our ministries now. We are called to trust that each step forward in our present passing of time serves as a model for the saints to come, proving through our presence that their ministry is a possibility. We are called to step into our now so that, in lives to come, possibility can become discernment and our Church can grow evermore into an image of God that might look like something close to the varied gifts that are encompassed in the creator of all things.