In March 2020, my small church pressed the pause button on several ministries. Even as some groups stopped gathering, other ministries adapted, evolved and even grew. It’s been interesting to watch people’s needs and desires unfold throughout the pandemic. The need for fellowship meant that our Tuna Ministry quadrupled its monthly contribution to the Tarrant County AIDS Outreach Nutrition Center because more people were showing up on Saturday morning to share masked conversation in the parking lot along with their canned food.

When libraries initially closed and Amazon deliveries were delayed last March, our bi-weekly book group evolved into a Bible study. We couldn’t count on members getting books with time to read before our online gatherings, so we chose a book that everyone already had at home or could access online – the Holy Bible! We quickly shifted from bi-weekly to meeting every week on Zoom, and soon our participants doubled in number. We finished Acts in Easter (thanks to a curriculum created by Becky Zartman) then rolled right into studying the minor prophets over the summer months. When we began hearing Genesis in the Sunday lectionary last fall we decided to go back to the very beginning ourselves. We studied Genesis, Exodus, and even Leviticus.

When it came time to read Numbers though there was some pause. It would be the Easter season and Numbers just didn’t feel like what we needed in our lives. One faithful member admitted that she found herself reading the psalter a lot recently and would like to learn more about them. So, that’s what we did.

The psalms are grounded in the experiences of life: pain and joy, fear and peace, sadness and elation, praise and doubt. This is what we needed as we marked the first anniversary of the pandemic. We needed the permission granted in the psalms to speak opening and honestly to God about the complicated feelings within us.

Using the wisdom of Walter Brueggemann, Daniel Estes, Robert Alter, and Ellen Davis, I walked us through the history of the psalms, their genres and ancient uses. We shared how we might pray with them ourselves and the situations when they would be most helpful. The final week each member was tasked with writing a short psalm. This expectation was named during the very first class and it loomed over folks for five weeks. They were terrified and expressed their fear to me through emails between classes.

I adjusted the class calendar so we could talk through their concerns. I offered a refresher on metaphors and parallelism, and how psalmists used them both. I thought a simple model for writing our own psalm would be starting and ending with a statement of thanksgiving with everything else in the middle. I found a list of psalm writing prompts online and instructed the class to chose 3-6 questions to answer in their ‘middle verses.’ For folks who were still anxious, I encouraged them to choose a psalm that resonates with them and simply replace the specific situations with joys, concerns, and details from their own life. 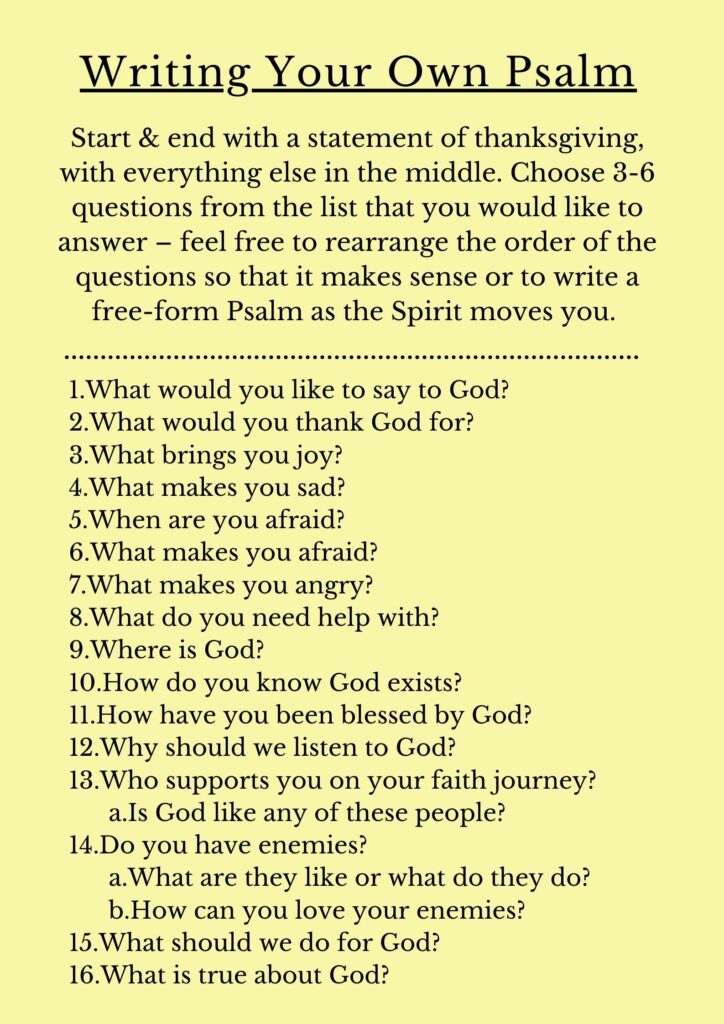 With great trepidation we signed off Zoom and got to work. When we reconvened the following Wednesday afternoon, every one of us had written at least one psalm. And even more remarkably, all of us were eager to share them aloud. One person wrote a psalm of lament about the state of our country. Another participant wrote psalm of assurance about God’s presence during her current round of chemotherapy.

Like everyone in the group, I found them surprisingly easy to write. I imagined that I would overthink the process like everything else I write, but instead I sat down at my desk with my pen and notebook, and the words just came. I wrote one psalm, then another one. The following day, I wrote another one. I found that I was able to write what was on my heart in an entirely different way than I pray them in centering prayer or in silent spurts throughout my day.

Walter Brueggemann has this idea that prayers must be spoken aloud or written down in order for them to be authentically true. He admits it’s risky because we lose control of our prayers when they are outside of us. However, we have to put them out there because once prayers are outside of ourselves God can claim them. There’s no accountability with prayers are exclusively thought. Brueggemann’s words made me think about about the risk involved with saying ‘I love you’ for the first time after thinking it for months. Those three words take on an entirely different meaning when they are finally spoken.

I hope to continue writing psalms as a form of prayer and spiritual practice and look forward teaching my children about it, too. We’re still in the bedtime prayers that are lists of names and situations and I think writing out their concerns in more detail will be just as meaningful and holy as it was for our church Bible study. It will be one more ministry that adapts and evolves during the pandemic.