Everyone told me that visiting Iona, a small island off of the western coast of Scotland would be a magical, otherworldly experience. Since the 5th century, when Saint Columba established his monastery and planted the seeds of Christ’s redeeming love in Scotland, Iona has long been regarded as a thin place where the lines of heaven and earth are blurred and glory is as close as the mist rising from the sea.

But after two planes, one train, two ferries, one bus, and an uphill walk in the rain, my arrival to Iona last summer felt anything but transcendent. Weeks earlier, grief had barged into my life and left a gaping wound in its wake. Although my pilgrimage had been two years in the making, I struggled to walk the 50 yards from my inn to the 1,000-year-old abbey for worship each morning with the resident community. I didn’t feel like singing songs of joy. I didn’t feel like sitting next to strangers I didn’t know. I didn’t want to stand and recite a creed I wasn’t sure I still believed.

Alas, it was just my good (mis)fortune that during my first worship service we were asked to turn to our neighbor and share our thoughts on the morning’s scripture. (Do you want to know what an introvert’s worst nightmare is? Being told to turn to someone you don’t know and then engage in a conversation with them.) My closest neighbor happened to be a grandfatherly-type man named Gus. Gus had been seated at the table next to mine both at dinner the night before and breakfast that morning. Leaving breakfast that morning, he introduced himself and said he’d love to talk and hear my story—to which I smiled back and told myself that I ought to come to lunch and dinner at a different time lest I see him, talk to him, and have to listen to some kind of spiritual woo-woo-ness or break down in tears, which I had been prone to doing at the drop of a hat.

Now I was stuck next to Gus in worship. When it was my turn to answer the question all I could do was cry. I pointed to my eyes and said, “welp, this is my answer.” He said nothing, instead put his hand on my knee and left it resting there for the remainder of the service. Rather than standing with the rest of the congregation at the recitation of the creed, he stayed seated with me in solidarity. In between the tears and sadness, a wellspring of tenderness began to push through the shards of pain.

Over the remainder of the week, Gus always made a point to sit next to me, but he never demanded anything of me other than my presence. He’d just smile and say “I’m glad you are here.” On occasion, he’d encourage me to go on a hike and take in the island’s colorful serenity. I did so begrudgingly at first, only to discover a beauty and calm that had otherwise eluded me. 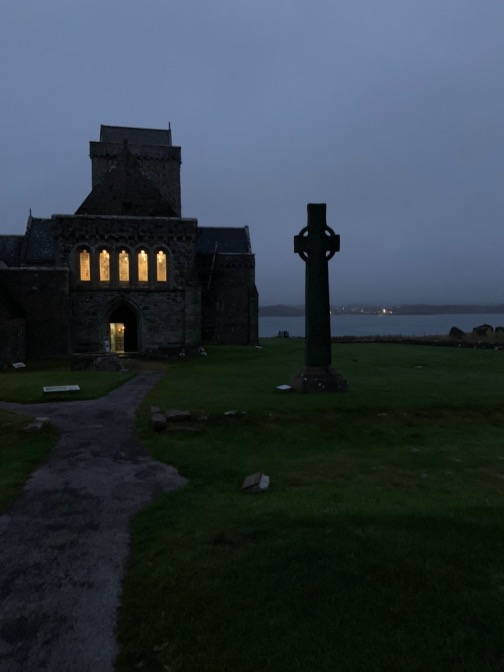 By the time my visit to Iona ended a week later, I found myself basking in a different kind of transcendence.

I had expected Iona to be an otherworldly place of mystery because of its religious history. Gus’ steadfastness revealed a mystery that came from the simple act of showing up for me and embodying the Spirit’s comfort when I most needed it.

As we celebrate Saint Columba today, I am reminded that Columba’s impact extends beyond the monastery he built into a community and spirit of steadfastness, companionship, and love even when things weren’t exciting or glorious. Columba’s legacy endures because of generations of people who have committed to showing up day after day—to hold hands, to pray, to refuse to let someone walk away when they were ready to call it quits, to be the community of ragamuffin beloveds that we are all called to be.

That’s what Gus did for me last summer. Could it be what God is calling to you this season?

but in my tears and sorrow,

and in a community rooted in the abiding conviction that we belong to one another,

I was reminded that sometimes the most holy and transcendent thing we can do is to show up when it would be much easier to walk away.

As racism and gun violence continue to destroy the innocent and our souls struggle against the weight of apathy, cynicism or overwhelm, may we find strength and hope in the simple, but profound act of showing up—to life, to each other, and to a story of Love that won’t let us go.