Earlier this month our family visited Sewanee as part of our annual pilgrimage to higher elevation in the summer months. As soon as we stepped foot on the Holy Mountain, friends began asking if we had visited the Chapel of the Apostles to see the new crucifix created by artist Laura James. As the final stop on our whirlwind tour of Sewanee, we finally walked to the chapel to see it. 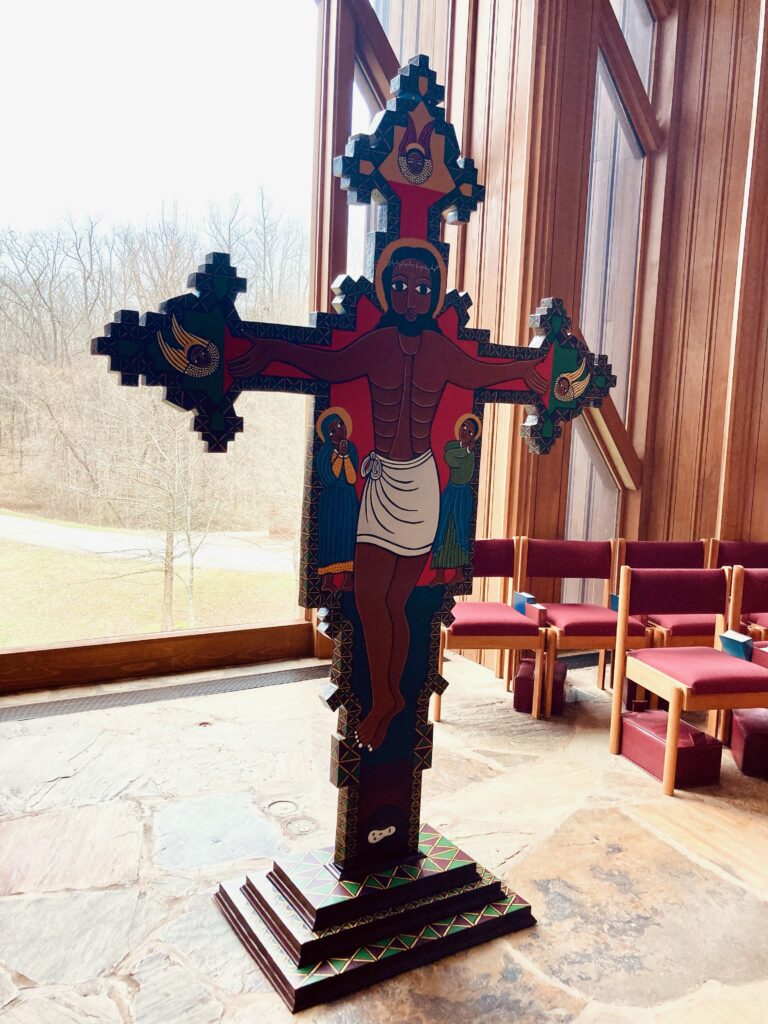 My husband, son, and I were drawn straight to the crufifix, bypassing the font, the altar, and green mountain views from the surrounding windows. As the three of us gathered round the painted crucifix, our ten-year-old daughter crept up behind us. When the boys left and it was just the two of us, she whispered her question, “Mom, I thought Jesus had white skin?”

My heart dropped and my eyes grew big. Did she really say what I think she said?

Throughout her decade of life, I’ve been so intentional about how I describe and present God. I use female pronouns when talking about the Holy Spirit and no pronouns at all when talking about God the “Father.” When they were younger, I only read from children’s Bibles that depicted Jesus and his disciples as persons of color. When we did come across more European portrayals of Jesus, I paused the movie/story/museum tour to talk about it.

I was shocked that after years of such conversations, she still believed Jesus looked like her.

Her question reminded once again of the stronghold white privilege and white supremacy has on our lives.

We did what we always do, we talked through why she thought Jesus had white skin. In the span of five short minutes, we looked at Jesus while I reminded her that Jesus lived in a part of the world where most people have brown skin. I explained that white Christians in the pews felt better about their unjust behaviors when Jesus looked down upon the cross with a skin tone similar to their own. It’s far more difficult to justify enslaving Black and brown people if you understand that Jesus likely was a person of color himself. And so, white people created Jesus in their own image and it became the status quo.

Admittedly, we don’t read from story Bibles anymore. My daughter doesn’t see illustrations of Jesus when our family participates in the Good Book Club or when she hears lectionary texts read on Sunday mornings. All she can do is envision Jesus in her mind as she listens. Until her question in the Chapel of the Apostles, I assumed she was picturing Jesus with brown skin because of the foundations we laid in her early years. I realize now that she’s instead calling upon Jesus as seen in the stained glass windows of her churches and more likely, simply assuming he looks like her.

As we walked out of the chapel I noticed a line of icons below the balcony, all depicting Jesus as a white man. We paused to look at them and I channelled the Godly Play teachers of her younger years.

I wonder what Black ten-year-olds think when the only Jesus they see in church looks like this?

I wonder if it’s hard for Black children to see Jesus as their savior if he’s always depicted with white skin?

I wonder how the descendants of enslaved people respond to being called to follow and worship a white master?

I don’t think there is anything inherently wrong with artists depicting Jesus as their own race. But, I do think there is a serious problem when these are the only images of Jesus presented to us, therefore requiring us to see them as the norm.

My daughter’s question stirred me out of complacency. We’ve had honest conversations about racial justice, white privilege, and white supremacy ever since the fatal events in our neighboring town of Charlottesville five years ago.  I’ve kept a steady flow of books written by authors of color in her hands, curated family movie nights based on the racial makeup of the cast, and taken her to Black Lives Matter marches. I’m not even sure our children notice such passive parenting actions because it’s just what they are used to in our household. What I am sure of is that I’ve become that terrible trope of the progressive white woman who thinks she’s done everything right.

We are a white family in a country that prioritizes white lives, and we are white Christians in a Church that has historically done the same. The work is ongoing for us and I am well aware now how direct and explicit I need to be with our children.

How do you think worshipping a Black or brown Jesus would affect your worship experience?

When was the first time you saw a depiction of Jesus that was not white?