Search me, O God, and know my heart;
test me and know my thoughts.
See if there is any wicked way in me,
and lead me in the way everlasting. (Psalm 139:24)

The “deed,” as I came to refer to it, had weighed on my spirit for years. Decades. I thought I had defeated it, had succeeded in blotting it out from my memory. But, despite my heroic efforts, the “deed” would always re-emerge, often unbidden, to mock my belief that I had conquered it.

I often felt that I was playing a grotesque form of Whack-a-mole, dispatching once and for all the offending thought with the mallet of my will, only to have it reappear somewhere else.

Time, it is said, heals wounds, but not all. Sometimes a stronger salve is needed to restore wholeness and full health. This is particularly true when it is the soul that has been wounded as the result of sin.

Sin. Now there’s a word we almost never hear in our purportedly “post-religious,” “post-Christian” culture. “Sin” has been supplanted by the words “mistake,” “error,” and “bad judgment.” Those labels are less likely to make people uncomfortable, and sound less harshly judgmental than “sin.”

Over the years, I had placed those more comfortable (and comforting) labels on my deed, hoping that they would smooth its sharp edges, making it other than what it actually was. However, as I grew older and became more serious about my faith, I realized that there is a difference between making a bad judgment and committing a sin.

Although I was baptized, raised a Christian, and had attended as a child my neighborhood Methodist church, I had not been a member of any particular denomination until I joined the Episcopal Church a little over 30 years ago. There were numerous practices and rites that were not features of the previous churches I had attended and with which I had to become accustomed. Confession was one of them. 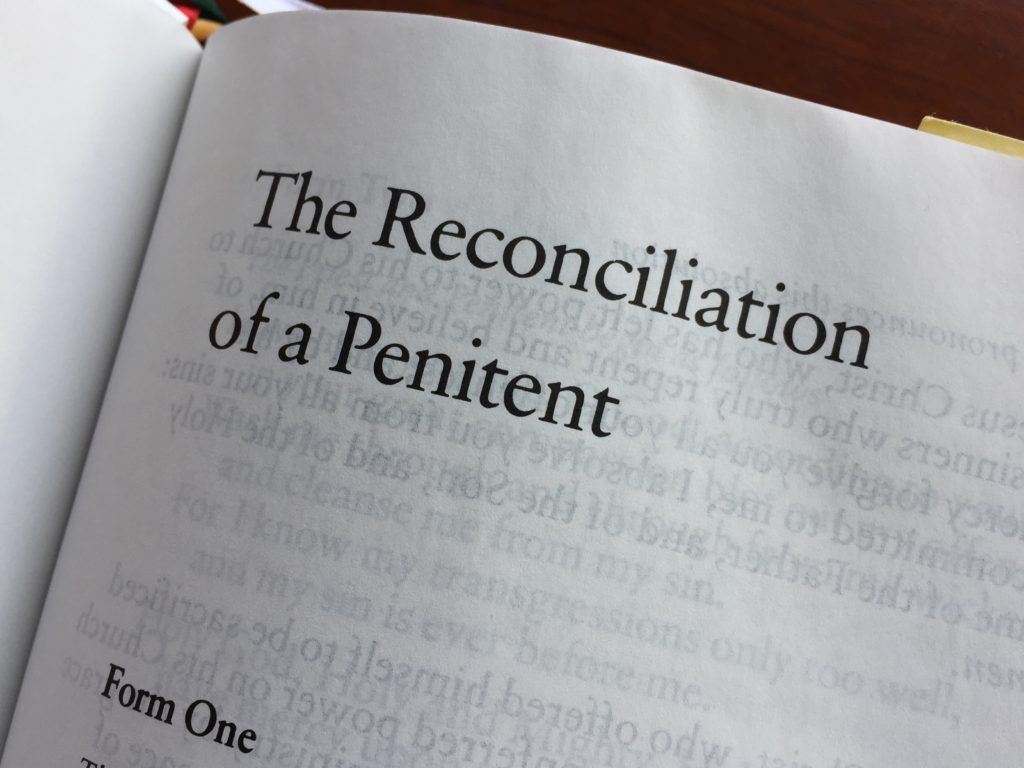 Making confession is an important action in my church, to the point that it is embedded in the very stonework of the building. The seven sacraments are represented in a set of floor tiles placed along the foot of the high altar. Confession (or, as the tile reads, “Penitence”) is among them. In the Catechism of The Book of Common Prayer penitence is clearly defined as an act where “we confess our sins and make restitution where possible, with the intention to amend our lives.”

That really gets one’s attention. It is meant to.

Each Lent, both verbally and in print, my fellow parishioners and I were invited to make our individual confession to one of the clergy. This invitation is extended throughout the year, but during Lent, it seems more heightened, more urgent. While it is not something we have to do, the invitation explains, it is something we should do.

Yet each Lent, despite the weight of the “deed” growing heavier upon my conscience, I came close to accepting the invitation only to end up chickening out.

Last year, however, when Lent began, I accepted the invitation. I was weary of carrying the burden of the “deed” and wanted to be free of it. I wanted to say “I’m sorry” to God.

I made an appointment with one of the priests and, on the agreed-upon day and time, we went into one of our church’s chapels, a quiet space within the already quiet church. The priest handed me a large laminated card on which prayers and other statements appropriate to the sacrament of confession were written.

I was nervous at this first experience of opening my soul and revealing my long-buried secret to someone I knew yet who was also a stranger. Would he condemn me in his private thoughts for what I had done? Would my secret become the stuff of fellowship hour gossip?

But then I remembered his assurance that whatever I confessed was between myself and God. He is a kind of spiritual facilitator whose role is to listen, to guide the process, and to give absolution. I needed to trust that he would forget what I confessed, and it would be forever expunged from my life. Happy are they whose transgressions are forgiven, and whose sin is put away!

My intention was to confess the “deed” and to move on. “Is that all?” the priest asked, with much surprise. “Were there occasions when you were covetous, angry, lied?” he continued. “Think hard.” It was not only that ages-old sin I needed to confess, but all those great and small moments when I had broken the Ten Commandments, which I and everyone do daily, often unthinkingly. And there is no health in us.

I knelt on the chapel’s little prie-dieu and read the concluding prayer from the laminated card. “Now go into the church,” the priest instructed after giving me absolution, “find Psalm 139 in the prayer book, and read it silently and meditate on it.” I did as he instructed.

The heavy stone of guilt was lifted. There were no choirs of angels singing, no blinding light piercing through the church’s stained glass windows. I felt only peaceful relief, an inner lightness, which surpasses theatrical imaginings. This was not magic, but mystery.

Like many first-time experiences, my first confession was a significant event in my life, and one that has deepened my faith.

Like forgiveness, confession is difficult and yet beautiful. It is a gift that is freely given, which we can freely accept to help us to reset ourselves and to restore our relationship with God. But unlike first-time experiences, confession can be repeated without becoming stale. It always renews.

Thanks be to God that I finally did.

Have you experienced the sacrament of confession? What has it meant to you?