I fail daily at motherhood. My ideal family and my all-too-real family do not align. In large part that’s because I find myself pulled in many directions. I struggle with consistency. Occasionally I even whine on Facebook (and get taken to task by people telling me it’s me!).

Once upon a time I thought that by the time I attained middle age, I would have life figured out; I would know exactly how to approach each day.

So I’m glad for the new book The Power of Imperfection, from British author Ruth Scott, just arrived from Forward Movement. 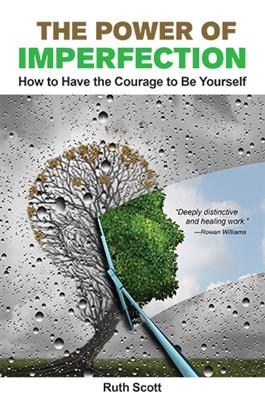 This book links Scripture and personal reflection in ways that are both reassuring and wise. Reading it, I felt I had found a friend: someone willing to share her own imperfections along with helping me recognize and even accept my own. Ruth Scott’s reflections about family life stand out for their combination of forthright honesty and spiritual depth:

Families have much stronger expectations and needs of one another, whether spoken or unspoken, than they have of strangers… Although it was not Jesus’ intention in the parable of the Good Samaritan to suggest it was easier for the Samaritan (the outsider) to respond to the mugged man than it was for the other two men who were members of the victim’s own “tribe,” in the light of my personal struggles, that aspect has struck me more recently.

My family teases me about how unsympathetic I am when they aren’t feeling well. I followed very much in my mother’s footsteps by sending my children to school if they didn’t have a temperature and looked fine, regardless of how unwell they said they were feeling. I have always been intolerant when they behave like drama queens.

When my son came home from gymnastics complaining his foot was painful but then proceeded to bounce up and down on the trampoline, I didn’t take his complaint too seriously. When he came back from school the next day using a single crutch, I paused for thought, but watched him run up and down stairs and decided that at worst, his foot was probably only bruised. When he returned from school the following day on two crutches, I finally took him to the urgent care clinic. I was mortified to learn he had a broken bone in his foot….

Talking with other nurses, I suspect it is a hazard of the job that having worked with seriously ill people (many of whom cope with great fortitude), we tend not to make a big deal of minor ailments and accidents. It is also part of my family inheritance not to make a fuss.

Whereas illness or need in people who are not my family brings out the best in me, illness in those closest to me can trigger the worst of reactions. I identify with Saint Paul in his letter to the Romans: I do not understand my own actions. For I do not do what I want, but I do the very thing I hate.

I need to qualify this statement a little. When the children are obviously ill, I come into my own. When they were little, I decamped with them into the guest room and tended them through the night. I think the comfort of Mummy being close was as important a factor in their recovery as any medicine they took. Being there for my children when they were genuinely sick really mattered to me. That’s what mothers are for. It goes with the territory of being a parent. In other words, it is what I expected to do as they grew up.

Caring for a chronically ill husband on the other hand, was not what I expected when I met, fell in love with, and married Chris. I know I promised to love him “in sickness and in health,” but frankly, as a 22-year-old, I didn’t really think through what that might mean…

This section is the beginning of a longer meditation on life as a caregiver to her husband. She is frank both about the extraordinary challenge it has been and also about how it has helped her grow in compassion.

As I read her words, I realized once again that I’m never going to become the perfect person I long to become. Imperfection is my fate as a mortal, and that’s okay. The same is true of my children; they won’t be perfect either. Nevertheless, God is at work in us and through us. Ruth Scott helped me remember that imperfection comes with being human. I am grateful.

The Power of Imperfection is available here from Forward Movement. -Ed.

Do you feel you fall short at family life? Is that just normal?