On April 11, which was International Free Listening Day, I put on my “Free Listening” shirt, grabbed the cardboard sign with the same message, and headed to a downtown street corner where I waited for people to stop and talk. They did. 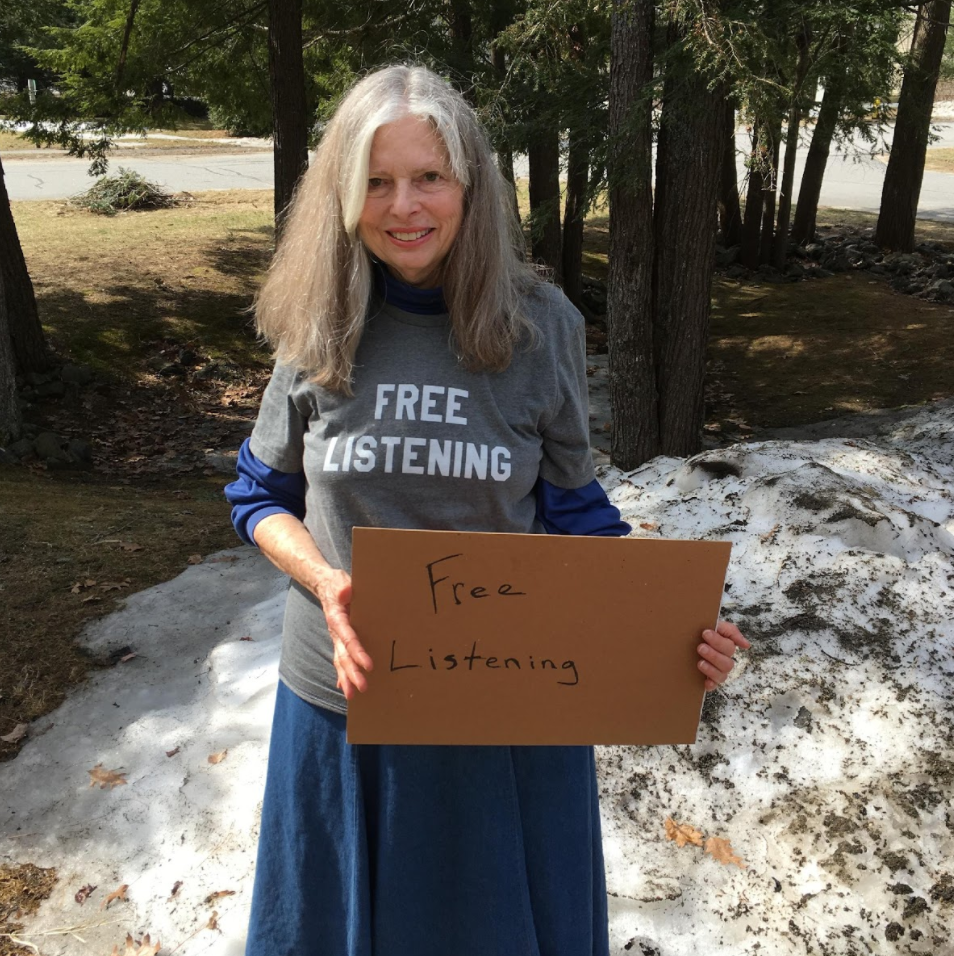 I suspect because of my gray hair, it was mostly older folks who stopped. Some were understandably puzzled about what I was doing. I briefly described the Urban Confessional: Free Listening Project which invites people to do what I was doing: simply make oneself available to hear, in this noisy and contentious time, what others need to say. Some just wanted directions to the closest coffee shop, but others heard the invitation in the explanation, and stayed to share a story or a concern.

The one that continues to haunt me was a woman who fretted about her young adult grandchildren’s inability to listen, or to converse. She said that at her granddaughter’s college, prior to the first freshman mixer, the college actually posted a list of questions that could be used to start a conversation because kids no longer know how. The idea was to help them feel more comfortable meeting the other new students face-to-face, rather than text-to-text. (When I got home from my morning listening, I googled “conversation starters for college freshmen” and in .7 seconds had 895,000 websites.)

She said she was disturbed but not surprised by this because a friend of her grandson had actually taken his father with him to a job interview since he didn’t know how to ask and answer questions in person — but figured his father could speak and listen for him. (He didn’t get the job.)

This pensive grandmother deepened my appreciation for the Free Listening Project’s mission to provide time and space for people to speak what’s on their hearts to someone whose sole job is to listen.

In the weeks that have passed since Free Listening Day, I’ve realized that for those families who access sites such as Grow Christians, conversation is already happening. The various saints’ day projects, suggestions for prayer and parenting, ideas for books to read and outdoor activities to try – all these necessitate talking with the children, and listening to their responses. Interaction, conversation, is assumed.

What a gift this is to the children! I knew it from a faith perspective, but it is bigger than that.

When they are first year college students heading to their first dance, the intentional work you have done to raise them faithfully means that they won’t have to rely on any of those 895,000 prepared “conversation-starter” options. They will have their own lively curiosity about others, a lifetime of table fellowship and conversation, and the ability to see Christ in each person they meet. What better way to encounter the stranger?

Have you ever tried “free listening”? Would you?