Growing up, one of the items that was always present on my bedroom dresser was a little glass cup. Shaped like a shot glass, but even smaller, it was the first cup from which I received communion.

My Lutheran church didn’t use the common cup, and instead, I always knew it was a Communion Sunday (usually the first of the month) when I saw a big pile of white on the altar which was the covering over the trays filled with the little shot glasses filled with wine or grape juice. 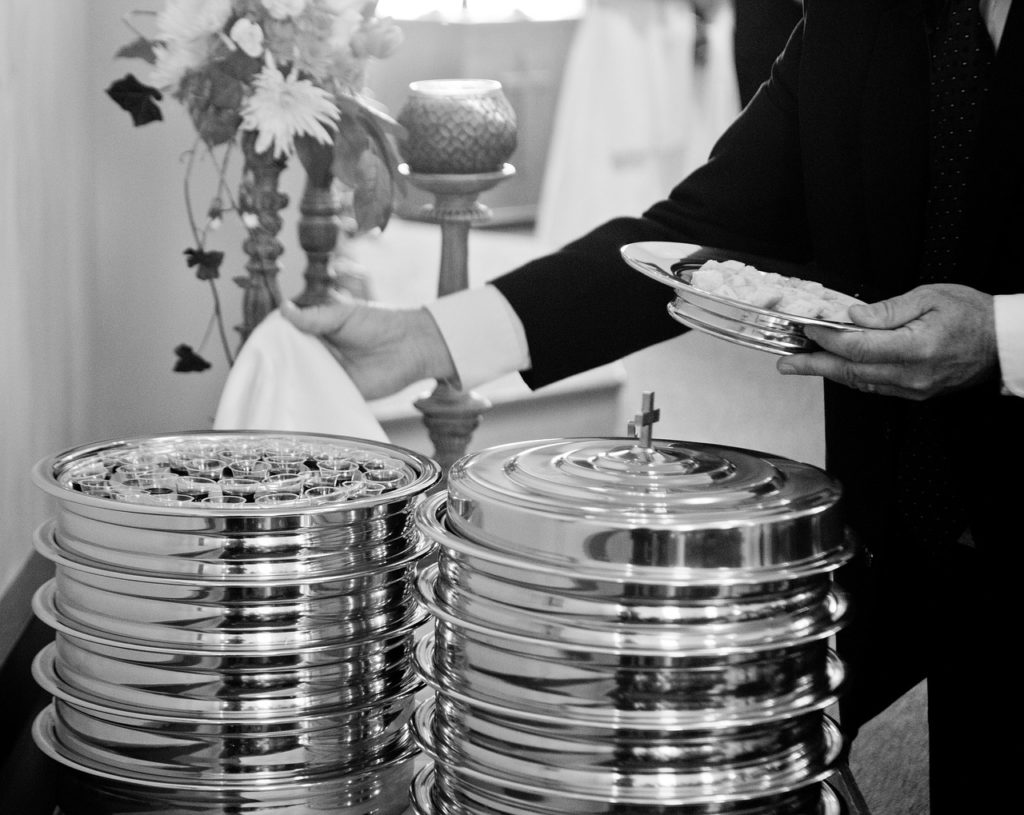 As a little Lutheran, I wasn’t allowed to receive communion until I’d gone through our First Communion class that took place when you reached fifth grade. I remember enviously watching my older brother after he completed the class and it was still two years away for me. The class met two Sundays after church and the pastors talked about what communion was and why we received it.

I remember sitting there, listening to their talks and to additional comments interjected by the parents sitting with us—including my own. The class culminated on the following Sunday as we were the first people to go up, kneel at the rail and receive communion and as a remembrance of the event, we were invited to take the glass cup with us.

Often I’d see that little cup sitting on my dresser and it would remind me of that event.

Neither of my girls have a little cup like that.

They’re Episcopalians, born and bred under the ’79 Book of Common Prayer. As Episcopalians trained in the baptismal theology of the prayer book, my wife and I communed our daughters from the time that they were baptized. They’ve never known a time when they couldn’t receive; they’ve never had that sense of age-induced envy where one could receive and the other couldn’t—but yearned to.

When one of the parishes we attended offered—at the request of a culturally Roman Catholic family—a First Communion experience complete with white dresses and lacy gloves and all, I protested. A First Communion class isn’t our theology! First Communion ideally occurs at the time of Baptism! And, yet, I had to grudgingly agree that it was a good idea even if I did insist that the name ought to be changed.

Our children have been receiving the Eucharist since Baptism—and yet they still need instruction in what that means. Now, my kids have had the misfortune of growing up with a priest and a lay theologian for parents. We’ve made sure that at various points in their faith development we’ve intentionally sat them down and talked with them about the Eucharist, what we’re doing, and what it all means, tailoring the talk to their capacity to understand.

But how widely is that happening?

Episcopal children, Episcopal parents, could benefit greatly from some intentional times to pause and consider what we do when we celebrate the Eucharist. And—I think we should do this not once but several times as children develop and as their capacity for understanding grows.

At this point, I’d love to point you to some resources—but this is where I draw a blank! I have no idea what’s out there for children, teens, and even adults to teach them clearly and succinctly about the Eucharist at various stages of their faith journeys! What have you found? What do your communities use? And at what at ages have you seen instruction being offered to help draw children into a fuller understanding of their sacramental experiences?

How have you helped your children understand and reflect on Holy Eucharist?

What would help you?