“What do you remember about last night?”

“Just being cold and wet.”

I was talking with my nine-year-old daughter while we walked to school about having attended the interfaith vigil service last night in Pittsburgh for the victims of the Tree of Life Synagogue shootings over the weekend. An anti-Semitic, anti-immigrant shooter killed eleven people and injured six, in the neighborhood that is literally Mr. Rogers’ Neighborhood, about a half-hour drive from us. By the time we got there, the hall and the aisles were all full, so we listened on the speakers set up outside.

As my daughter remembered, it was, in fact, cold and wet. It had not occurred to us that we would be standing in the rain – the hall seats more than 2,000 people – we were completely unprepared. Others were wiser than we, and also generous, and helped shield us from the rain. My new favorite image for the Kingdom of God is having one dry and one wet shoulder, which is what happens when more than one person tries to share an umbrella.   Did my nine-year old understand why we dragged her and her brother (11, he rarely admits to being cold) out for the service? I have no idea. 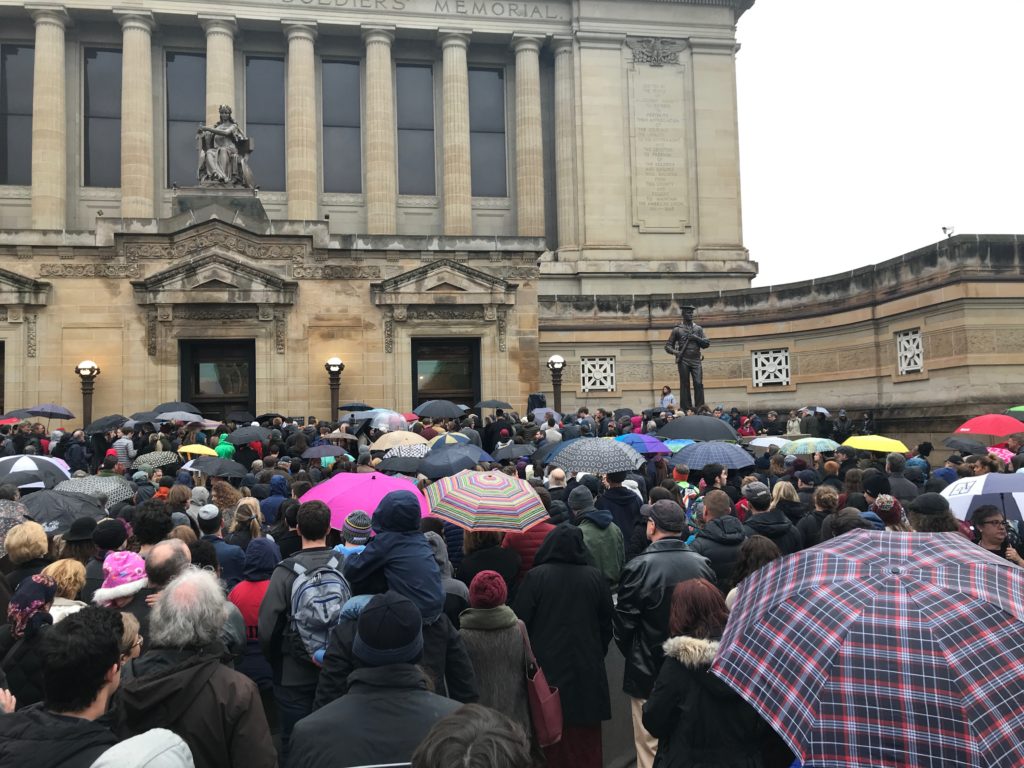 By now you’ve probably read lots of good advice online about how to talk with your kids about violence.

Help them to feel safe but acknowledge danger where it lies (a very different conversation across races and social location, to be sure).

Be aware of what kids already know, while also giving them age-appropriate information so they won’t be shocked if they find out about violence from friends.

Protect them from visual images, if possible.

Take care of yourself.

There are many best practices. They can be googled.

The fact is, though, that this shooting is different because at its core, it is about hatred. There are many things that it is also about like access to guns, and the wider normalization of extremist, dehumanizing political views. The shooter had hatred in his heart against immigrants as well, lashing out as he did against HIAS, a Jewish organization that helps refugees. It may be about access to mental health care, too. But as this person killed those 11 people, he was thinking very specifically about wanting there to be fewer Jewish people in this world. And that is the evil that ties my tongue. There’s no subtlety, there’s no analysis, there’s no middle ground. And it happened in my backyard.

He hated and he killed. What do I say about that?

The only thing I can come back to is that feeling of being cold and wet. And just being together, with Muslims and Jews and Christians and atheists and everybody in Mr. Rogers’ neighborhood. There was nothing heroic or virtuous about it. It was just where we needed to be. Let me be clear–there are lots of times when apathy or inertia or just plain selfishness blocks me from going from where the Holy Spirit calls me to go. But by the grace of God, this was not one of those times. We just went to be together.

So that’s my million-dollar piece of advice. Be together with others.

Show up with and for those who are not the same as you. Share in the cold and wet. That’s what the incarnation is about: God being with us. God sharing in our life, as well as in our death. Teach your kids about the fact that hatred exists, and that something can be done about it. And be thankful for your one dry shoulder, under your kind neighbor’s umbrella.