I’ve spent time in the church my whole life, first as a clergy kid and now as a clergy spouse. Where I grew up, in a very Anglo-Catholic diocese of the Episcopal Church, matters of doctrine took second chair to matters of Which Brasso Product To Use To Polish Fancy Things. That is to say, discussions of doctrine took second chair to discussions of Brasso. It’s not that they didn’t think it was important; they just assumed it was settled.

And so, with fumes of freshly ironed altar linens in the air, I did not give much thought to the doctrine of the Trinity. I knew that the Trinity existed. I also knew that oxygen existed, but that didn’t mean I had to think about it a whole lot. But it seemed to matter more how I crossed myself with holy water while whispering the name of the Trinity under my breath, than whether I really understood what I was whispering. When I asked questions, the Trinity was explained as something that was, not something that should be figured out. At church camp, Trinity Sunday was the day that the bishop insisted that someone (ahem, I) play “Holy, Holy, Holy” on the foot-pumped chapel organ (1982 Hymnal, number 362). Lord God Almighty.

It wasn’t until I married an Episcopal priest that I understood that Trinity Sunday is generally accepted as the least-desirable preaching Sunday of the church year. Because of its complexity, I suppose, it’s hard to wrap up complicated doctrine in a 15-minute-or-shorter (or, please, for the love, maybe 10-minute-or-shorter) sermon. I have good news and bad news for those of you preaching those sermons: a lot of us don’t put that much thought into what you say.

All of this is to say that I’m about the least qualified person to write about the Trinity, but I volunteered for this gig because I’m probably about the least likely to get fired from my job for committing heresy.

I have seen the Trinity illustrated as an apple: you cut open the apple, and you see skin, flesh, and seeds. All are parts of the apple, an apple wouldn’t be an apple without them, but they are all different. I’ve heard the Trinity described, quite beautifully, as a dance between a mother and a son at the son’s wedding with the son’s bride looking on.

Maybe it’s all the Brasso fumes I inhaled as a kid, but I don’t feel the need to look even as far as the produce aisle or the dance floor to look for an illustration of the Trinity. I just need to look at families. As a parent, in some ways, I’m expected to be all things to my children, at least at first. I’m nourishment, shelter, safety, facial tissue, furniture, music, comfort, and transport. For a while, I can (kind of, imperfectly) fulfill all of my baby’s needs. If I can pack enough diapers and wipes, and plan out my day with very specific detail, I can achieve everything that needs to happen to be all of those things to a baby.

It doesn’t take long to realize that I can’t be all things to all people, though, and the facade breaks down. I start to feel the need for someone to be all things to me, and the humans around me, helpful as they are, fail at that, too. I feel this in my station of life, in my particular circumstances. But I don’t doubt that every parent (and probably every human) has felt this way at some point or another, trying to keep it all together and Do All The Things.

I know that there are children who feel this way, too – that they have to be all things to their parents – academic and athletic all-stars, fulfilling their parents unfulfilled dreams for themselves.

Even the most well-prepared parent or compliant child can’t live up to that kind of expectation. Trinity Sunday coincides with Father’s Day this year, and we don’t have to read very much of the Bible to know that perfect Fathers are hard to come by. Even Father Abraham didn’t have time to polish his Father of the Year trophy when he was leading Isaac up the mountain. Jairus knew he couldn’t do everything alone when he sought out Jesus to heal his daughter. Dads and Moms are not enough on their own, even in the Bible. 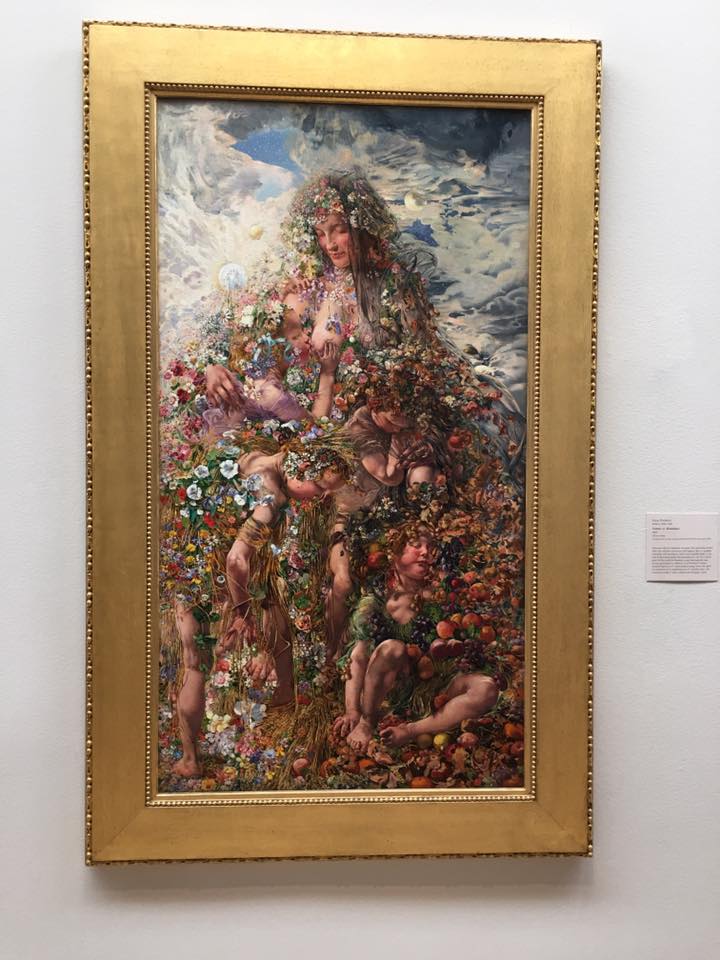 Mother Nature being consumed by the many needs of her children.

Good news. God is all things – Parent, Child, Spirit – and continues to be all things perfectly even when our needs become overwhelming and unmanageable.

Going back to that great Trinity Sunday hymn, we’re reminded that God is “merciful and mighty.” Without compare – “there is none beside thee.” We’re not designed to fully understand it: “though the sinful human eye thy glory may not see.” And even though we don’t understand and can’t see, we know without a doubt that God is “perfect in power, in love, and purity.”

I’m perfect in none of the above, as a parent or as a child. I’m grateful that I don’t have to fully understand trinitarian doctrine to be the recipient of that love and mercy. That perfect mercy and power extends deep enough to catch my inability to be all things, and high enough to meet my pride in thinking that I can be everything.

[Image Credit: Photo of Léon Frédéric’s painting Nature taken by the author at the Dallas Museum of Art]