This year I celebrated Easter at an auto show.

In celebration of my godson’s 12th birthday, his parents surprised him with a trip to Washington’s annual car show and invited me to come along. As I drove into the city and barreled over D.C.’s infamous potholes on a crisp April morning, my mind ran a constant loop of all that remained unfinished on my to-do list. With Holy Week a mere five days away, there were sermons to write, bulletins to proof (again!), cards to send, and parishioners to visit. So, after squeezing my car into a coveted downtown parking space, I took a final read through the latest emails, stuffed my planner in my case – in case I needed to “check” on something later – and hustled down the block to the convention center.

Inside the main entrance I joined the throng of visitors and ascended a steep elevator to the showroom floor where a cascade of svelte models, catchy videos, and shiny metal promised us the trifecta of automotive perfection: a smooth ride, worry-free maintenance, and the affirmation that heated leather seats were less of an indulgence and more of a just reward for hours of hard work.

Over the next several hours, my godson’s family and I darted from car to car and demo to demo, pausing only for a quick lunch of cheeseburgers and root beer. Although I am usually quick to lament our society’s indulgence with consumerism, it was hard to argue with the joy and wonder of a twelve-year-old kid basking in the knowledge that this was his day. It was he, not the experienced, supposedly wiser adults at his side, who decided our next steps.

He was fully himself, fully alive, and nothing was standing in his way – not even the angst of being a tween nor the self-consciousness that often accompanies it. He was the one volunteering for demonstrations, spouting off answers, and asking questions without shame. “Who is this kid?” I thought watching him. I had not seen my godson this excited in years. That’s not say he’s sullen or quiet, but there was something different about today. His soul was on fire and he was beaming, and I had the distinct privilege of having my full week interrupted by the wonder and joy of it all. 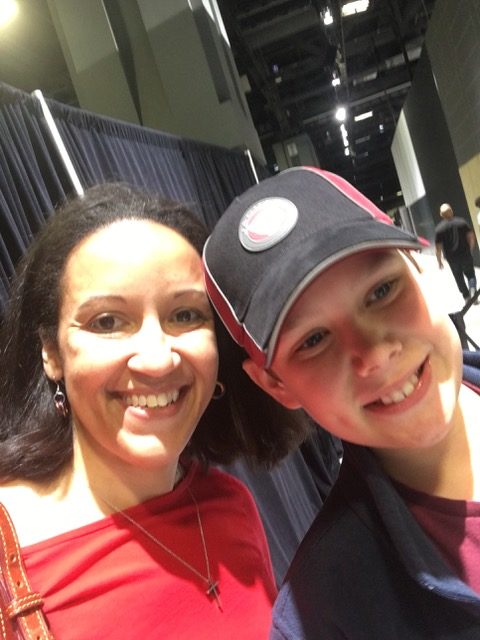 Watching him run from car to car as he explained to me the finer details between engines and horsepower, I did my best to fight back tears. In all of the crowds, noise, and bling, it hit me: everything I needed was right here.

I had stayed up late the night before to make up for the “lost” time at work. However, as I stood on the plush blue carpet that afternoon watching my buddy, I realized that my absurd attempts at productivity were not only fleeting, they blinded me from the beauty and wonder of the present moment. We were made to behold and wonder – not only in the crystalized oranges and reds of an evening sunset, but in the midst of concrete, steel, and the fluorescent lights of a car show…when the to-do list is long and the so-called important stuff awaits. Perhaps this is what Nehemiah meant when he said, “the joy of the Lord is my strength.” It was in letting go—not getting ahead—that my soul found peace.

Today we remember Evelyn Underhill, a 20th century mystic, teacher, and writer who beckoned Christians to expect and look for the sacred amidst the ordinary and quotidian moments of life. To Evelyn, transcendence was not necessarily something that happened in the desert, atop a mountain, or while kneeling in a cathedral. Nor was it reserved for those tucked away in monasteries. It is for all of us in the midst of our ordinary lives. It occurs when we slow down, pay attention, and recognize ourselves as part of a larger story of creation and glory.

On the Tuesday before the holiest week of the year, inside a convention center’s cavernous walls, I found the peace that a checked-off to-do list can never provide. In witnessing my godson’s peace and delight, I knew the peace and delight of the One who has fearfully and wonderfully made me – and most certainly you – more than enough.

This year I celebrated Easter at an auto show because sometimes freedom won’t wait.

Where have you experienced transcendence in ordinary life?