Today marks the feast of Joachim and Anne, the parents of Mary and the grandparents of Jesus. They don’t appear in canonical scriptures, and lacking source material, generations of Christians have looked for them in themselves. In the second century an account of their lives appeared as the apocryphal Protevangelium of James, modeling their story (and the miraculous birth of their daughter) after other biblical birth narratives, particularly John the Baptist, Isaac, and Samuel. Samuel’s mother’s name, Hannah, was the original form of the name “Anne.” Like those long ago families, the childless couple Joachim and Anne grieved their loneliness and are blessed with a child in their old age. Out of gratitude they dedicate her to God’s service in the temple, and she goes on to do great things.

We read and write stories to understand ourselves as much as to explain the past or document the present. The accounts of Mary’s parents and her miraculous infancy say a lot about the hopes of the late second century, less so about the 21st. They are not canonical scripture, and there’s probably a reason for that. Thomas Aquinas called them “apocryphal ravings.” Sheesh.

So what could the feast of Anne and Joachim have for us today?

If I had a story to write about Mary’s parents, it would feature less concern about their dedication to the preservation of her virginity (a big theme in early renderings of them) and more about the gifts of bravery and strength she received from them. Medieval iconography often depicts Anne teaching Mary to read. If we’re finding big truths in stories, that one is the one I want. It’s totally out of context for the historical Mary, but when I think about what reading means, I love it. 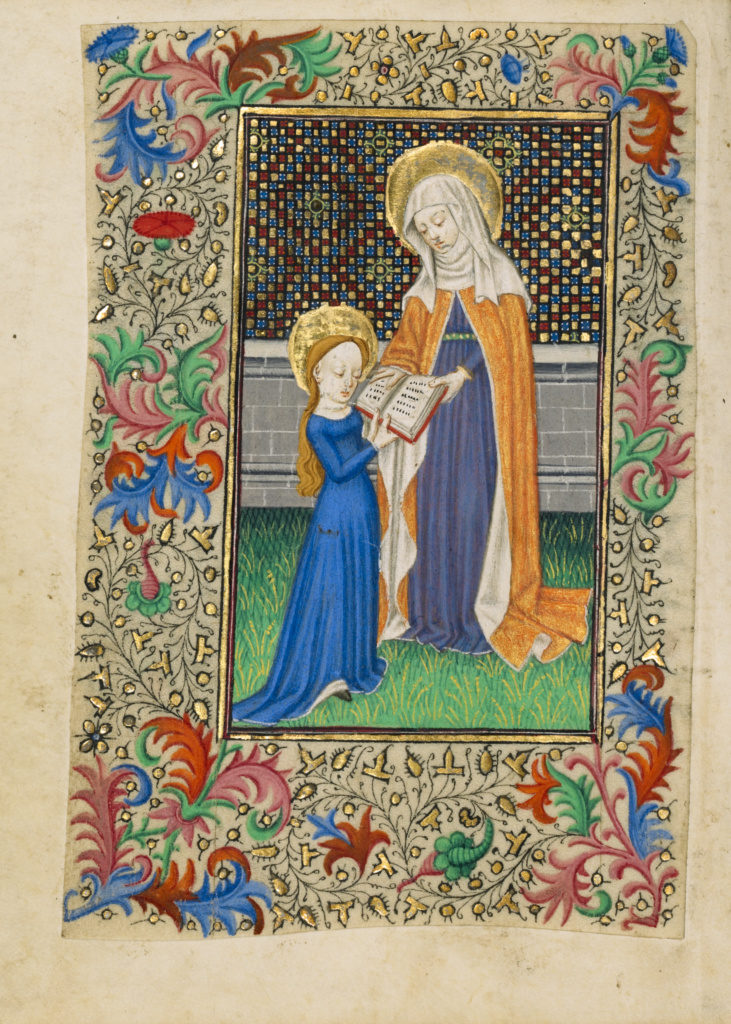 Having the tools to find a different world, to push the boundaries of our own expectations, this seems like an excellent way to imagine Mary’s relationship with her parents. And pushing the boundaries of the expectations of the world were a tool Mary most definitely needed and, somehow, was able to call upon.

The writer Jeanette Winterson says about books, “Books, for me, are a home. Books don’t make a home — they are one, in the sense that just as you do with a door, you open a book, and you go inside. Inside there is a different kind of time and a different kind of space” (Why Be Happy When You Could be Normal, 2013, Grove Press).

This image of Joachim and Anne giving Mary the tools to find other worlds and new truth affirms my sense of longing for my own children. I want them to go in search of themselves and the world, finding self-determination and learning to thrive. We shouldn’t hold the obedient silence so often attributed to Mary in Christian iconography against her (or her parents).

Mary said “yes” to the angel; bearing Jesus was a calling she answered for herself. Joachim and Anne could be proud of their daughter’s courage. During Holy Week I always remember the words of Simeon at the Presentation in Luke, “a sword will pierce your own soul too.” Mary sees her son suffer and die; this harsh reality is far from what her parents might have wanted for her. Nobody wants anyone to be pierced by a sword, but it’s far worse to live a life avoiding them.

Joachim and Anne would have wanted Mary to be strong and they would have wanted her to be loving. These are deeper hopes than eight lifetimes spent languishing in safety. As my children leave me and venture out in their lives, I can take solace with them that others have also sat at the window watching, twisting their hands in their laps.  We can’t control what comes at our children, no matter how we might wish to. With Joachim and Anne and a lot of great stories, I know the providence of God will sustain them.