I went to seminary as a single, young woman in my mid-twenties after living overseas in Tanzania for three years. I returned to the States after working with refugee affected populations on the border of Rwanda and Tanzania. To say I missed out on pop culture and fashion and even the rise of the internet while I was away, is an understatement. I assumed that I would be single forever because as I told my college friends, “How am I going to meet someone? I mean, it’s not like I’m going to walk into a bar and ask the guy next to me, ‘what is your favorite gospel?’”

But, this question, what is your favorite gospel got me thinking during my seminary tenure about which gospel was truly my favorite. On the days I felt like the world was totally askew and needed justice to roll down like living waters, I praised the Gospel of Luke for its emphasis on the poor and the outcast. On the days when we needed to get to the point, I praised Mark for its brevity and use of the word “immediately” throughout the story of Jesus’ life. And for those moments, when we needed signs and lengthy discourses and “I AM” sayings, I clung to John. And, then there was Matthew, the gospel which is considered the giant of the church, in part, because of its placement as the first gospel.

The Gospel of Matthew is the gospel that taught me, and continues to remind me, that Jesus was thoroughly Jewish. This is the gospel that makes the relationship between Moses and Jesus of paramount importance. One stands on Mount Sinai receiving the Ten Commandments. The other stands on a mountain speaking words of challenge and comfort in the Sermon on the Mount. One delivers his people out of the Red Sea, out of slavery in Egypt, and to the precipice of the Promised Land. The other frees his people through the hard wood of the cross, so that all might experience his saving embrace. Moses and Jesus are both set aside by God to do the Father’s will. Jesus is, indeed, portrayed as a second Moses in the Gospel of Matthew.

Even though the story of the Prodigal Son is told in the gospel of Luke, it is Matthew who helped me understand how poignant it was that the lost, younger son squandered his days away living amongst pigs. Now most of us think pigs are gross and dirty, but, for a Jew to have contact with a pig was blasphemy. The book of Leviticus shapes the people of Israel to be a unique and chosen people, and one of the conditions of this community is to not eat pork or anything for that matter that comes from non-cud chewing hoofed animals. I thank the Gospel of Matthew for helping me to understand the Bible more deeply because of the Jewishness of Jesus. 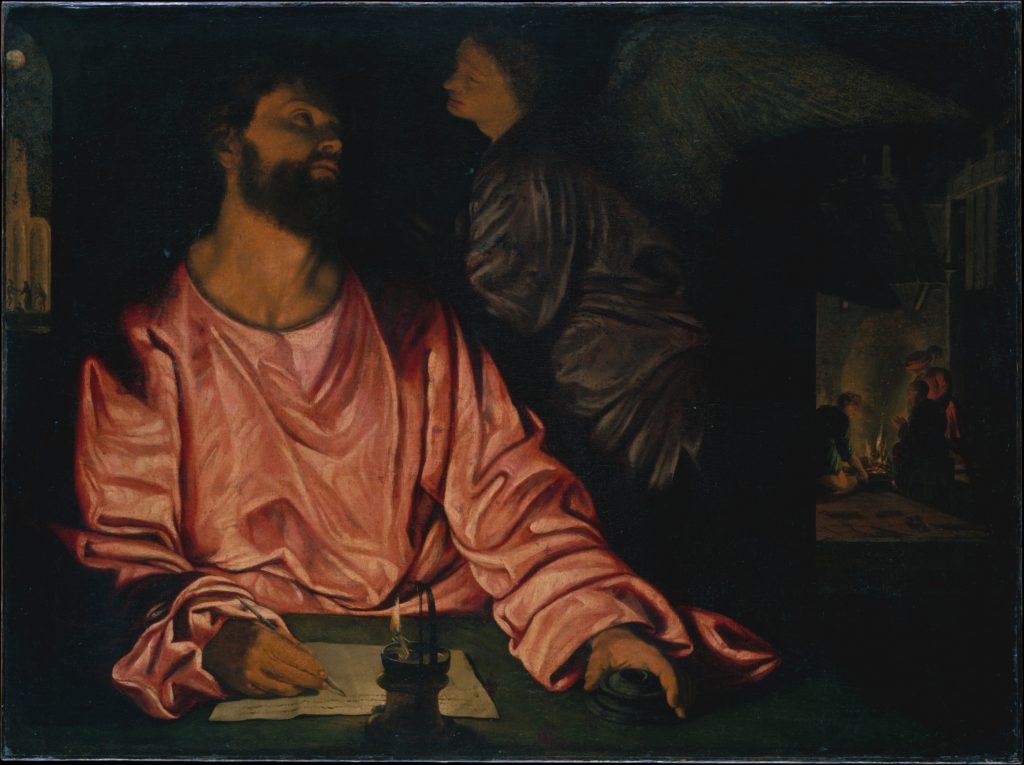 Saint Matthew writing his gospel, inspired by the angel who is his traditional symbol.

Matthew reminds us that Jesus was, and is, from the house of Israel. One day, my younger son asked me, “If Jesus was the Son of God, did he worship himself?” I almost felt like he was a Pharisee laying a trap for me. As our conversation continued, I realized how important it was to stress that Jesus came from a long line of faithful people following the will of God and Jesus was given a vocation to do the same. My son was trying to get at the idea that Jesus was narcissistic and egotistical if he worshipped himself. Thanks to the Gospel of Matthew I was able to help him see that there was a great lineage of leaders, called to do great things, whether they were great or not. The Gospel of Matthew gives us the gift that all those begets and begats in the opening, connecting us to the greatness of God acting in human history.

You know, nobody ever walked up to me in a bar and asked, “What is your favorite gospel?” But, I ended up marrying a priest, so the joke is on me. We have spent many evenings talking about the gospels–and Matthew always gets some airtime.

[Image Credit: Saint Matthew and the Angel by Giovanni Gerolamo Savoldo, Public Domain via The Metropolitan Museum of Art]