A few years ago, I received an electronic Christmas card from a friend who had always sent a paper one. This e-iteration had, literally, all the bells and whistles, especially the bells. It showed a charming English countryside with a Gothic church tucked into a valley, which, when I clicked on it, opened to a group of singing choristers processing through the church’s nave. Candles flickered, music soared, bells tolled. After a few seconds, my friend’s greeting appeared, followed by her “signature.”

Cleverly designed, visually and aurally appealing, this card had what no traditional version could offer: convenience. All my friend needed to do was select the e-card she wanted to send, type her message, “sign” it, and hit send. No time-consuming writing, no licking envelopes and affixing stamps, no hoping the card arrives by Christmas Day. She had clearly stepped into the brave new mode of sending Christmas cards, while I felt like the proverbial Dodo bird.

My friend’s e-card brought back memories of Christmases past when my mother, with Swiss watch reliability, always performed two rituals the day after Thanksgiving: setting her fruitcake and going to Woolworth’s to buy a boxed assortment of Christmas cards. A small box contained about fifteen cards, while one proffering thirty was for marathon card senders like my mother. During this time, Christmas was fully celebrated for twelve days, providing more than enough time to accommodate card writing and sending. And even if she didn’t send out all thirty cards, mom didn’t want to be caught short, which would have meant a return trip to Woolworth’s.

Images of sweet-faced cherubs by Raphael or da Vinci, or of majestic Gabriels delivering their annunciation to elegantly-robed Madonnas did not grace the front of these cards, which were of thinner rather than expensive and heavier quality stock. The Woolworth’s assortment depicted portly Santas assisted by busy elves, Mary and Joseph looking adoringly at their new  baby, children making snowmen, and winter scenes with a dusting of sparkle that always rubbed off onto the recipient’s skin and clothing.  The cards’ greetings were also predictable: “Merry Christmas and a Happy New Year”; “Season’s Greetings”; “May the Joy of this Season Bring Warmth to Your Home.” Woolworth’s cards were for the masses, for folks like my immigrant parents whose modest incomes and, perhaps, less discerning tastes put only these kinds of Christmas cards within their humble reach. The selections may have been the height of kitsch, but that didn’t matter to mom.

Like Santa, my mother made two lists. Hers were not naughty and nice, but rather one for our far-flung extended family and another for friends and neighbors, not forgetting the mail carrier and her hairdresser. Then, with cards and lists before her and favorite pen in hand, mom thoughtfully matched the recipient with a card from the assortment. She addressed and signed the cards in her careful penmanship, sometimes adding a note describing our year. Once the envelopes were sealed and the chosen stamp for that year was affixed, we mailed them at the post office in hopes that they would arrive at their various destinations without being folded and spindled.

After reading the Christmas cards sent to us, we immediately taped them on the living room wall, creating a colorful display to enjoy. When Christmastide ended, we removed the cards from the wall, which left behind a barrenness as absolute as the January and February winter days that followed. Instead of throwing them away, we tied them with leftover gift ribbons, and placed them in shoeboxes in a closet. When the next Christmas rolled around, we took out those year-old cards and enjoyed their beauty one last time before finally committing them to the trash. 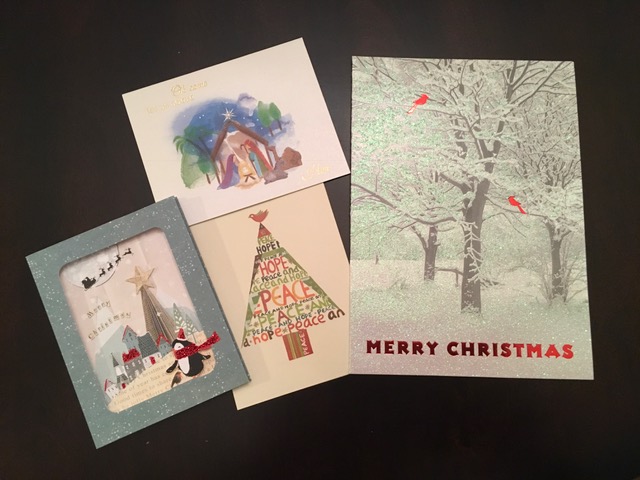 For all its flashiness and convenience, an e-Christmas card is inherently ephemeral, lasting only as long as I keep it on the computer screen. I cannot hold it and feel its texture, admire (or struggle with) the sender’s handwriting, or put it on display. I cannot keep it in a shoebox and treasure it for years if I want to. E-cards lack what their old-fashioned predecessors did – and still – have: soul. Many traditional cards are works of art, designed by extraordinarily talented people whose imagination and creativity bestow a soul into mere paper. Watching my mother select, write, and mail dozens of cards over the years I learned that it is the giver who also transforms a paper greeting card into something that communicates our feelings for the recipient.

Each Christmas I look forward to buying, writing, and mailing cards to relatives and friends, as well as to the thrill of opening my (real) mailbox and taking out real handwritten cards, often from people I have not seen in years. An e-card can never replace one bearing “Merry Christmas” scrawled of a 5-year-old, the heartfelt handwritten message of a beloved friend, or those sparkles that take days to remove from your clothes.