About a year after my husband and I joined our church, the Associate Rector started asking what we were going to do to “get involved.” During a church dinner one winter evening, she happened to mention the Altar Guild as a ministry in need of new volunteers. At the time, I still felt so new to everything. I also tend to drop and spill things, so the idea of tending to the care of the sanctuary and altar intimidated me. But Frank—who was an altar boy as a child and lives by being careful and detail-oriented—was immediately intrigued. Later that spring, he became the first man to serve on the Altar Guild at our church. As he tells it, the team he joined welcomed him with full and loving hearts and did not subject him to too much (good-natured) “hazing.”

At home, Frank shared what he was learning, often by setting up pretend altars for our young son, John Paul, who was starting to show an interest in all things liturgical. Before long, John Paul knew more about vesting a chalice than many adults at our church, and he wanted to come along to Altar Guild with daddy. I worried that our energetic and inquisitive then 3-year-old would be too helpful or that the novelty of his presence would wear out, so I often tagged along to help wrangle him. John Paul, however, easily formed his own relationships with “the Altar Guild Ladies” (as he affectionately dubbed them), and I relished watching the team incorporate him into their tasks with patience and respect. They invited him to help count wafers by 5s, trusted him to carry cruets of wine and water, and taught him how to polish the brass.

Watching from the sidelines piqued my interest. I started to see how the routines and deliberation created moments for meditative focus that were lacking in my life, and that the careful attention necessary to set the altar for a service could appeal to me in a deeply spiritual way. Since we were coming to Frank’s Altar Guild Saturdays as a family more often than not, we decided to join the team—as a family.

I imagine it seems funny to some people in our parish that my husband and young son helped bring me to a ministry that has been historically served by women, but I had been struggling at times to feel connected to the church community through some of the more “typical” avenues (e.g., where my identity was that of a mother of a small child). As it turns out, serving on the Altar Guild for the past two years has been one of my favorite and most fulfilling ways to participate in the life of our church. Coming to this group in this way helped me be open to new perspectives and new relationships.

I wanted to get Frank’s perspective on his experiences before writing this essay, thinking he would have something to say about being the first man to serve on the Altar Guild and breaking down gender barriers, but that was not the case. Instead he told me about never being allowed on or near the altar as a child. The forbidden nature of the altar created a sense of mystery but did not foster closeness, and the Altar Guild has helped him become more familiar with the church and the liturgy, helping him to forge a more intimate relationship with God and his faith as a result. Breaking down the barriers between the pews and the altar may not be something everyone wants to do, but for Frank it has been a very good thing. 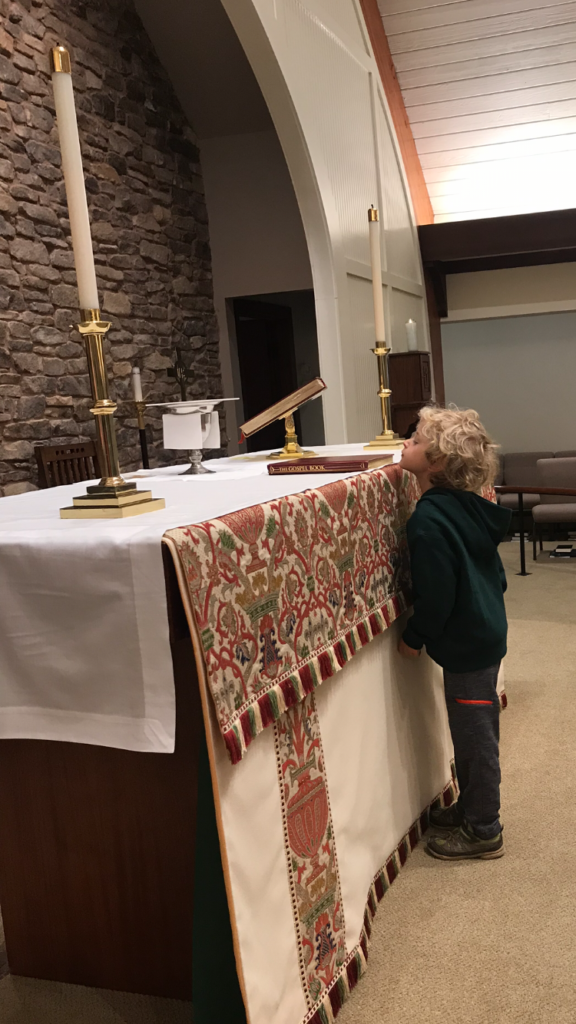 What is most interesting to me is that, at 7, John Paul has not had the chance to internalize too many barriers, be they social or liturgical. He doesn’t know or care whether it’s unusual for a kid to spend Saturday mornings polishing the push plates on the narthex doors or prepping candles for the Easter Vigil instead of playing soccer. And yes, he misses church school sometimes to help set up for the next Eucharist, but he is learning in his own way through observation and participation. He is building relationships with adults who treat him as a capable individual and experiences the joyful sense of accomplishment that comes with being able to help and contribute in ways that are meaningful to him.

There are many ways to think about barriers: we broke down a few and, in the process, expanded our and others’ horizons. Altar Guild is a ministry that works for us as a family—we enjoy it, it fits into the structure of our lives, and we feel welcomed and fulfilled.