The kids have grown but the washing machine has not. Loads fill more quickly than in the days before hormone body odors kicked in. Sure, those baby outfits were royally soiled with incoming and outgoing food incidents (onesie blowout stains, oy vey!) but the clothes were so very tiny. I could have fit all their clothing from birth to age three in one extra-large load. Now when I throw my arms around Ivy to hug her from behind, the top of her head just barely fits under my chin. Her favorite cozy hoodie is a size women’s small. Three of her hoodies almost make a load.

As our daughters have grown so has the amount of time I spend in that windowless basement-corner laundry room. I’m not complaining, but it explains why Canticle Q, A Song of Christ’s Goodness, is pinned up on a wooden post above the dryer in the unfinished room, why routinely I prop up my phone on a banished-to-the-basement Ikea shelf to play some tunes while I sort, sort, sort, toss in a pod, fill, press start.

This was the situation a few Monday mornings ago, but for some reason I accidentally tapped open the Facebook app instead of a Youtube playlist. On my feed, John Floberg, longtime Episcopal priest of Standing Rock, was broadcasting live. Huh, I thought. This is interesting for a Monday morning from him. I wonder what he’s up to. John’s camera was set up near the altar so the masked-and-distanced folks arriving in the nave were in view. I noticed John and a few other folks in the back as if something would be starting soon. It was very quiet. And then I heard the sound of a woman off camera begin to loudly weep and realized this was a small funeral. Her wail—raw with grief and visceral anguish—filled my laundry corner, shot right through my sorting, right through this one Monday morning household ritual that the pandemic had not yet touched.

My heart pounded and I let her wordless agony speak. The words of Isaiah came to mind, “For a long time I have kept silent, I have kept still and restrained Myself; Now I will cry out like a woman in travail, I will gasp and pant.” (Isaiah 42:14). Of this, Hebrew scholar Abraham Heschel notes in his book The Prophets, “‘The allusion to the Lord as ‘a woman in travail,’ the boldest figure used by any prophet, conveys not only the sense of supreme urgency of his action, but also a sense of the deep intensity of His suffering.”

Notably, that Monday I did not hear or see whispers or awkwardness in the room about the woman’s vocal expression. No one rushed to the camera to turn it off. I’m speaking, said her pain. And everyone in that little church listened. I in my basement amid mounds of dirty clothes, could not help but listen and let her call be my own.

This summer and into early fall our parish held Sunday morning liturgies outside under the maple tree. One of the readings in late July or early August included Jeremiah 15:16, “Your words were found, and I ate them, and your words became to me a joy and the delight of my heart…” When I got home I wrote that verse on the kitchen whiteboard and it has not been removed since. It’s still speaking. 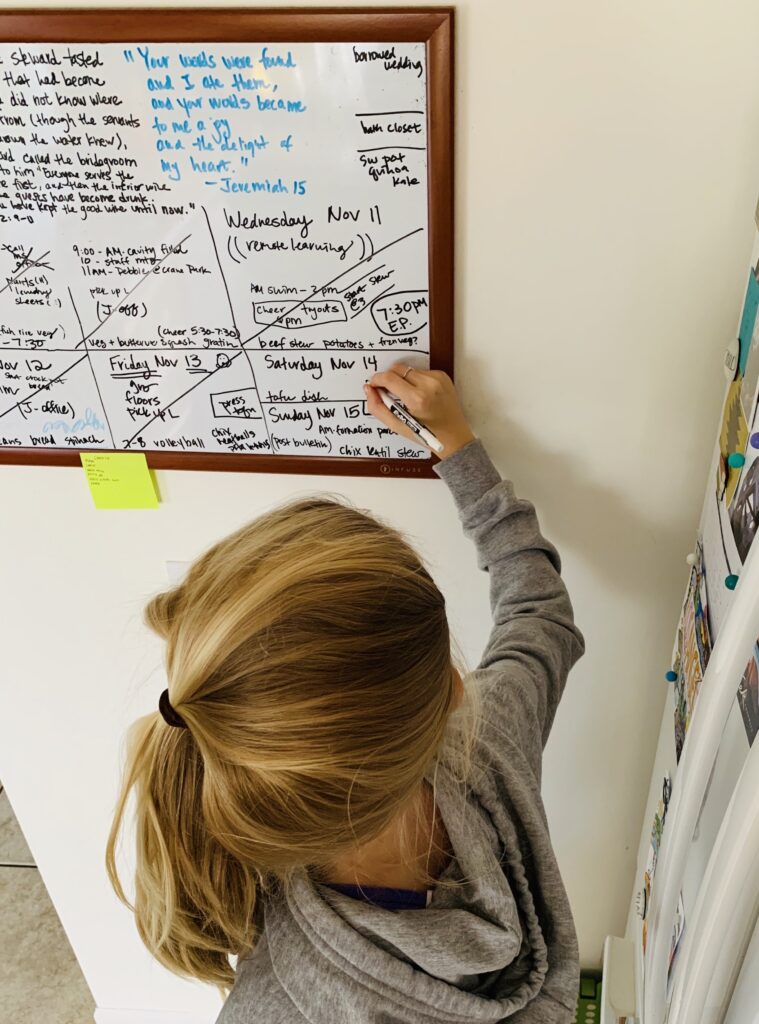 Recently I asked my rector, who is not only wise but very well-educated, why the prophets might be so intriguing right now. I was expecting an answer that was pensive and complex with lots of references to Hebrew and philosophy if not apocalyptic rhetoric. “Well,” he said, “the prophets spoke about the big things, and this is a time when we are forced to think about the big things.” Bam.

The prophets draw us in with their theatrics and allegorical living that models or speaks to God’s devotion to God’s people. But we don’t get to stay there. The prophets push us (out of the house into the cold sometimes!), demand our repentance, admonish our complacency, implore our work to make justice not just something we say or sing or observe but something we do—not casually with our spare volunteer hours or the loose change collecting in the car’s cupholder—but with our every breath, as God does.