I’m making another king cake for the Conversion of Saint Paul. The epiphanies will keep coming, whether by guiding star or blinding light or daily bread.

A few weeks ago, my family celebrated the Feast of the Epiphany a couple of days late. We made a special meal, chalked the entrance to our house, and ate great big slices of the king cake I had baked, and which my children had iced with the characteristic gusto of the elementary set. 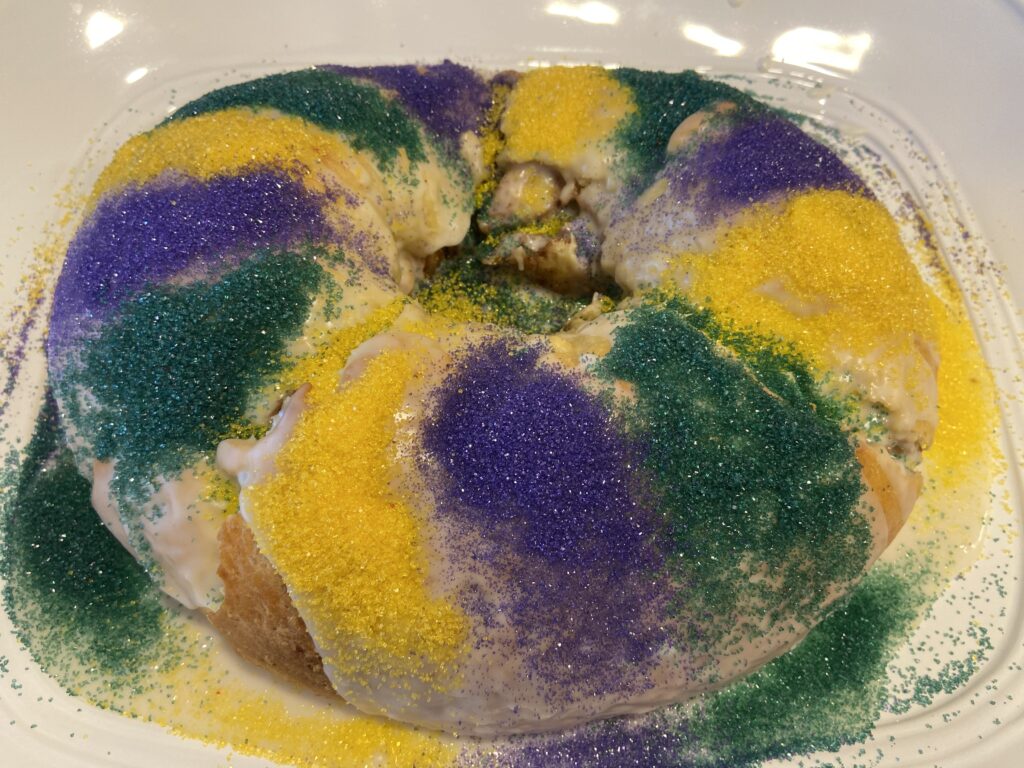 We moved the feast, though, from its usual spot. January 6 had been a jarring day as events in Washington DC unfolded, and that evening the church where I serve offered a virtual prayer vigil. The clergy masked up and sat distanced in our sanctuary, interspersing long stretches of silence with prayer and scripture readings and a gentle guitar. It was exactly where I needed to be. We heard from people later that they too were glad for the refuge—that they had needed to breathe in and breathe out, to be still and know God.

The vigil was streamed in the usual places people can encounter our parish worship, including on social media. There was something we liked about the idea that one’s scrolling could be interrupted by an invitation to pray. Throughout the afternoon, I had been reading and reading the news and somehow expecting it would be different in the next article I clicked through to. I know I needed an interruption—not as an escape from reality, but as a means of grounding myself in the deepest reality I know. The faithfulness of God, who begins and ends in love.

It felt important to me to “do Epiphany” with my kids, even if we did it late—to help them encounter through the story and rituals of the day something of that God who interrupts and sends us by another way. Who reveals our blindness, where we thought we saw everything with such clarity.

Saul, who would later become known as Paul, was born into a Jewish family in Tarsus. He was passionately upright in his observance of the law, and first regarded the Christian movement as a dangerous development. We know from the Acts of the Apostles that he witnessed and approved of the stoning of Stephen, the first martyr of the early resurrection community. He was known and feared among early Christians for his fervor in persecuting them.

He was on the road to Damascus on just such an undertaking when he encountered Jesus as a blinding light. “Saul, Saul, why do you persecute me?” Jesus asked, interrupting a mission of righteous certainty.

Saul spent three days in blindness, not eating or drinking, before a Christian name Ananias was sent (by his own vision of Jesus) to lay hands on him—in fear and trembling, one would imagine. Something like scales fell from Saul’s eyes; he regained his sight and was baptized. We know him as Paul, who became the great Christian apologist and evangelist who spread the good news far and wide.

I read the story of Paul’s conversion and fancy myself the faithful Ananias, dutifully deigning to help the wretch, but only as a favor to Jesus. It’s much less pleasant to consider that by my action or inaction, my fervent words or my privileged inattention, I’ve contributed to the suffering of God’s beloved world and need correction on the order of being struck blind.

Facing the ugly things revealed by the violence of January 6 is painful. We must reckon with things we wish weren’t true.

And so we seek the God whose cross confronts us with the need for mercy—whose own suffering reveals a path of healing for ourselves and for the world. When we see, we look upon a terrible truth about our human nature and at God’s ability to transform the very worst of who we can be, unfathomably, into healing and life. Yeah, I don’t understand it either, but it makes my eyes sting with sorrow and with hope.

I don’t know how God will interrupt us, or me, to change the way we see this moment and bring clarity about the way forward. Home by another way, or a season of blindness to ready us for a better vision? That I don’t know, but I will ask every morning for enough to chew on.

Seems like my kids should know this story of what happened to a man sure about everything. It occurs to me that neither an epiphany nor a conversion is something one can make happen. I’ll bake bread with a little nutmeg and lemon zest, and I’ll thank God for their characteristic gusto when they offer more sweetness than I knew to ask for.