I blame the podcasts. Or audiobooks. Or better yet, I blame the smart phone that makes the podcasts and audio books ubiquitously accessible. But let me be clear, I definitely don’t blame myself for my complete inability to sit in silence for more than 10 minutes. I know it’s 10 minutes because that was how long I commuted to work this morning without turning on a podcast—and that was me trying to be quiet.

It’s natural to look internally when reading about the desert mothers. On January 5th, Lesser Feasts and Fasts recognizes three of these desert mothers: Syncletica of Alexandria, Theodora of the Desert and Sarah of the Desert. All three of these women went by the title of amma (spiritual mother) and lived in the 4th and 5th centuries. It was during this period of time that many were escaping to the desert—including thousands of women ascetics. While the desert fathers are better known, some historians have speculated that there were twice as many women as men in the desert. These three particular ammas are the most well known ammas, partially because some of their sayings are included in the Apophthegmata Patrum or Sayings of the Desert Fathers.

The timing of this exodus to the desert is significant. Christianity became the official religion of the Roman Empire in the 4th century. Many religious men and women felt that this changed the faith for the worse. Christianity was no longer a religion that challenged unjust systems and ran counter to culture, but instead became the religion of the elite. Many left their lives and comfortable homes so they would not be complicit in this new manifestation of the faith.

I suppose that some critics might say they took the easy way out by escaping this new complicated way of being Christian in the world. Yet these desert mothers were not escaping society as much as they were escaping themselves—what they had become or what they feared they might become. They felt that they were doing battle in the desert. It was a place to build their inner strength and help them come to a place where they were completely dependent on God. The desert was a place of death—the place to die to false self and false supports.***

These three desert mothers didn’t intend to become spiritual mothers. That was probably the last thing that they wanted— but all three of them attracted communities that rose up around them, pilgrims hoping to glean their spiritual wisdom. Amma Sarah was the most isolated of the three. She was known for fighting the “demon of fornication” for 13 years. One might wonder why that particular demon would be a challenge for a woman living alone, but apparently she was fighting not just the action, but the thoughts. She sought purity of mind. She lived by the Nile River for 60 years and never looked at it, because she was so intent on creating a union with God. She didn’t want any distraction. 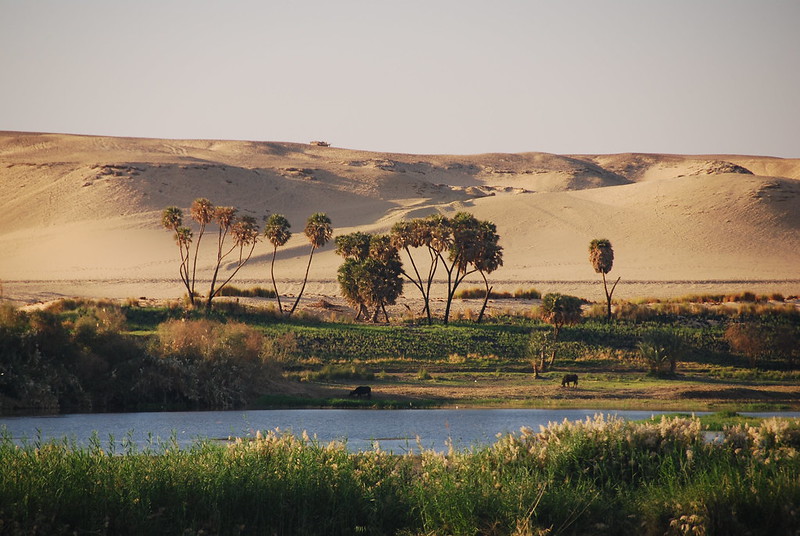 Image of the Nile River by Michael Gwyther-Jones

If someone like Sarah came to me and shared this story I would probably tell her, “Sarah, I think you might need the distraction. For goodness sake, look at the river.” Yet while her methods are unimaginable to most of us now, I wonder if she and the desert mothers were on to something when they dedicated their lives solely to oneness with God. They realized that the distractions were more than just a distraction, they were a way of life for so many.

I fear that has become especially true for me.  It’s been even worse since the pandemic because I am terrified of stopping long enough to really come to terms what is going on around and within me. I fear the silence and what it might reveal. One of the things the ammas taught was knowing themselves. We might call it being self-aware. I have always perceived myself as self-aware, but the more I read about the ammas, the more I realize I have forgotten who I am without the distractions. And that means I have forgotten who I am with God. So I am going to try just 5 minutes of silence a day. I will start there and maybe work up to 10. It might not sound like much, but it’s the best I have right now.  I am ready to remember who I am without the noise. If you face the same challenges, I hope you will join me.  But for goodness sake, look at the river.