On Good Friday during the Gospel reading, I sat in the parish office next to our Zoom moderator. I listened to the retelling of the final chapters of the Gospel of John thinking about how special it is to hear a story told out loud, even when I’ve heard it many times before. As I listened, a memory came to mind of the Easter Sunday I spent at a neighborhood church when I lived oversees near the University of Melbourne.

On the westside of the University of Melbourne campus is an expansive graveyard dating back to the 1800s. The tombstone monuments, statues of angels, and elaborate sepulchers can be seen from Lygon Street and Royal Parade, two well-traveled public transport tram arteries that funnel into the heart of the city. The graveyard is surrounded by a grey brick wall and the iconic black rod iron fence.

This location was quartered off for a season in 2005 for the filming of the movie Ghost Rider starring Nicholas Cage. I remember movie set trucks lining the streets outside the walls near the flat we were leasing on MacPherson Street, a long row house constructed in the boom of the Edwardian era. When movie production was over, my daughters Jacqueline and Elise, ages 9 and 7 at the time, compatriots of exploration and adventure, brought home foam core pieces of the Ghost Rider set. Not sure where they found them or where those pieces ended up, but I hold on to the vision of Jackie balancing a large rectangular set piece on her head as she walked home.

The local Anglican parish was called Saint Michael’s; it was built in 1885 and only a few blocks from our flat. The priest and his wife were very welcoming, and the church was a source and well-spring of connectedness for me as an expatriate. I attended Saint Michael’s for two and a half years, where my role quickly evolved from volunteer Sunday School teacher to part of the rotation of a children’s sermon speaker. The children’s sermon was a 5–7-minute Bible story offered at the beginning of worship before children left for Sunday School.

As I prepared to give the Easter children’s sermon in 2006, I read through the passion narrative and resurrection account from the Gospel of John. I meditated on the scripture and was struck by the courage Joseph of Arimathea possessed in asking Pilate for Jesus’ body.

Later, Joseph of Arimathea asked Pilate for the body of Jesus. Now Joseph was a disciple of Jesus, but secretly because he feared the Jewish leaders. With Pilate’s permission, he came and took the body away. He was accompanied by Nicodemus, the man who earlier had visited Jesus at night. Nicodemus brought a mixture of myrrh and aloes, about seventy-five pounds Taking Jesus’ body, the two of them wrapped it, with the spices, in strips of linen. This was in accordance with Jewish burial customs.  At the place where Jesus was crucified, there was a garden, and in the garden a new tomb, in which no one had ever been laid.  Because it was the Jewish day of Preparation and since the tomb was nearby, they laid Jesus there.  —John 19:38-42

On that Easter morning at Saint Michael’s, when I sat on the front altar steps with the children gathered around me, I spoke about this courage. I shared how Joseph of Arimathea selflessly gave up his own tomb and used his financial means to honor Jesus by bringing spices to the burial place. I told the children about how much the spices would have cost and brought a large glass mason jar filled with flour so they could visualize the large amount needed. 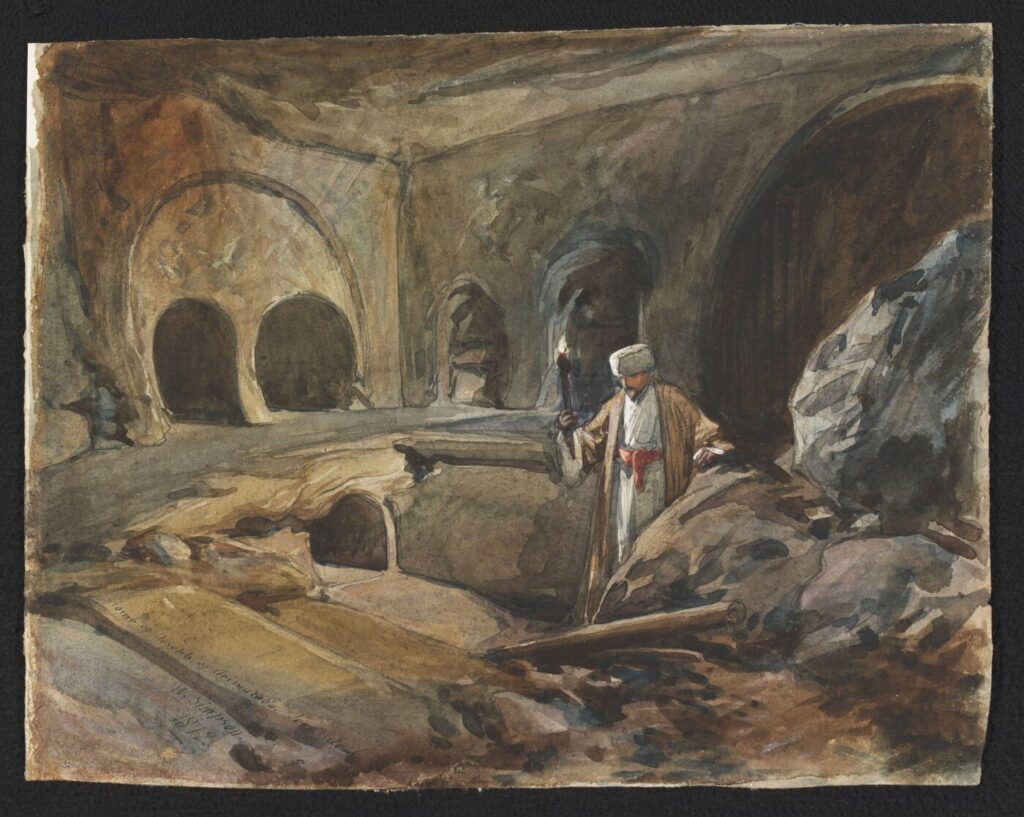 The Tomb of Joseph of Arimathea by William Simpson

After the worship service was over, it was a time of fellowship and refreshments in the new foyer that had just been built. The following Sunday, the Vicar introduced me to a woman and casually suggested that we go to lunch together. I didn’t think much more about the conversation and recommendation until it was shared that the woman donated $7,000 to the church building program and $10,000 to the Children’s Ministry program on Easter Sunday the week before. Saint Michael’s was a smaller parish, and these funds were received with great joy!

That afternoon, I remember riding my bike around Princes Park, near the university and graveyard, reflecting on all that had taken place that week. It was mindboggling to think about the size of the donation. I thanked God for offering the words I needed to present the Easter story in a unique way for children, that also managed to fall on the ears of the adults present, moving one to act in a miraculous way. The Holy Spirit is wonderful about doing that.

Several months later, as my family members’ visas were due to expire, I watched as the new part-time children’s ministry director was installed. These Easter funds and donations were given to hire her. It’s been years since that Easter morning in Melbourne; I think of it often and God’s serendipitous assignment for me to share about Joseph of Arimathea. My travels brought me to another Saint Michael’s, this time in Southern California where I reside at present as the Director of Christian Education.