Today the church celebrates the feast of St. James, Apostle. Last week Maria Nolletti Ross reflected on his life and offered a recipe in his honor.

Of St. James, Lesser Feasts and Fasts says, “He was the son of a prosperous Galilean fisherman, Zebedee, and with his brother John left his home and his trade in obedience to the call of Christ.” The Gospel according to Mark reports,

He saw James son of Zebedee and his brother John, who were in their boat mending the nets. Immediately he called them; and they left their father Zebedee in the boat with the hired men, and followed him.” (Mark 1:19-20).

This is still the first chapter of Mark. Jesus had just barely returned from the wilderness. He had no formal authority in their lives. At this point he had healed nobody and had barely taught anything. And yet they left their father and their means of livelihood behind in response to his command.

There is something about Jesus that makes a claim on a person.

People have been trying to explain that claim ever since Christ walked the earth. But St. James knew it at first hand. And so do we.

The image below is five centuries old, but as soon as I saw it I recognized a symbol from my own life: the scallop shell. 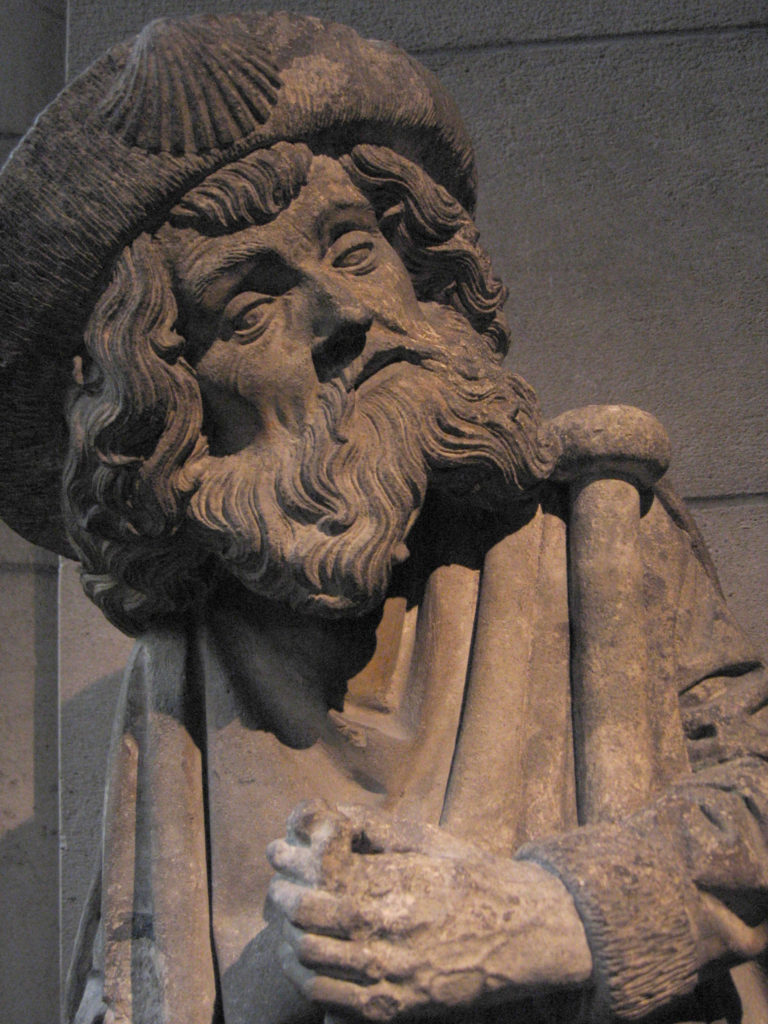 Over the years, this shell has become St. James’ symbol. It is especially associated with the pilgrimage to Santiago, the place he is traditionally understood to be buried. Legend has it that he went to Spain to share the gospel after the death of Jesus, then returned to Jerusalem, where he was the first apostle martyred. Then, his remains were returned to Compostela, which became a shrine in his honor. In the image above, the saint is depicted as if he is going on pilgrimage himself; he is wearing the shell and carrying a walking stick.

When I saw this image of St. James the Greater, I remembered my own baptism. Twenty years ago, the Rev. Terry Burke picked up a scallop shell, immersed it in water, and poured that water on me, baptizing me in the name of the Father, the Son, and the Holy Spirit. He told me the shell was a symbol of baptism, a symbol of pilgrimage. I was an adult, but I hadn’t been raised in the church; this was all news to me.

In those days I was studying to be a Unitarian Universalist minister. Getting baptized wrecked my career. But it made my life.

What drew me to Jesus, twenty years ago, was the recognition that I could not make it through this life on my own. I was not wise enough or good enough. I needed a teacher I could trust. I was willing to let go of my future livelihood when I found one. Of the many sacrifices made for Christ over the generations, mine was among the smallest. But it mattered to me; I would do it again.

There is something about Jesus that makes a claim on a person. St. James knew that at first hand, and so do I.

O gracious God, we remember before you today your servant and apostle James, first among the Twelve to suffer martyrdom for the Name of Jesus Christ; and we pray that you will pour out among the leaders of your Church that spirit of self-denying service by which alone they may have true authority among your people; through Jesus Christ our Lord, who lives and reigns with you and the Holy Spirit, one God, now and for ever. Amen.

How have you experienced Jesus’ claim on your life?