People warned us not to go. With the Euro soccer tournament and the wounds still fresh from last November’s terror attack in Paris, France was on high alert. Belgium was reeling from the bombing at the Brussels airport. Germany is flooded with refugees. Maybe, concerned friends and family members suggested, we should postpone our trip to Europe.

But we forged ahead, two decades of saving and dreaming unwilling to be daunted by possible threats. Eight days after our flight home to Cincinnati from Paris, a man turned celebration into terror. He transformed a truck into a weapon to mow over crowds of people who had just finished watching fireworks in honor of Bastille Day — akin to our Fourth of July.

If our trip was tomorrow instead of a month ago, I wonder if we would go. Among the 84 dead are a father and 11-year-old boy from Texas. Our son is 11. Although we didn’t visit Nice and the south of France, we ascended the Eiffel Tower, explored the city center of Munich, walked cobblestone streets in Belgium, and put miles on our pedometers in London. I can’t imagine the whiplash of emotions, from a longed-for family vacation to murder on the street. As I mourn with this family and with all of those killed in the attack, I turn inward, wanting to create a safe space for all those I love and to push away all the unknowns, to fear the stranger.

And yet there is Deen.

During our time in Munich, Germany, we visited an Episcopal church to learn about their work with refugees. Forward Movement donated resources for the church’s ministry, and we wanted to learn how we could help, both as a company and as a family. One of the church volunteers took us to a refugee camp where we met Deen.

He fled Syria ten months ago to escape ISIS and forced military service. His artwork had attracted the attention of some fundamentalist leaders, who said that they were of the devil. His family practices Ismailism, a more moderate understanding of Islam — a set of beliefs that puts them at odds with the radicalized groups.

His father sold a piece of beloved family land to fund a future for his teenage son, sending him off to travel by boat, train and foot to a safer place. In these months of limbo, while he awaits asylum and lives in a trailer inside the fenced walls of a refugee camp, Deen has learned German, adding to his polished English and Arabic. He has become an unofficial translator for the camp as well as the nearby hospital. He also auditioned for a spot in one of the prestigious schools in Munich — and his excellent artwork, intricate designs of circles and triangles, earned him admission, the only refugee they accepted.

Mohamad is his birth name. But, he says, he feels betrayed by his country. As he seeks a new life in a new place, he does so with a new name: Deen, inspired by a character on Supernatural, a show from the country he longs to reach.

Deen turned 18 years old on the day we met him. On a whim, we invited him to dinner. No one should celebrate a birthday alone, thousands of miles from parents who loved their son enough to send him away, to offer him a chance at a better future (or any future at all).

In patched-together German, I asked the waitress if the restaurant did anything special for birthdays, and somehow she understood, because a few moments later, she presented Deen with a grand dessert and a candle. My husband, daughter, son and I sang “Happy Birthday” (perhaps to the surprise of other German patrons). I don’t know what Deen wished for, but I can guess that it had something to do with one day having a safe space for all those he loves, a place to call home. 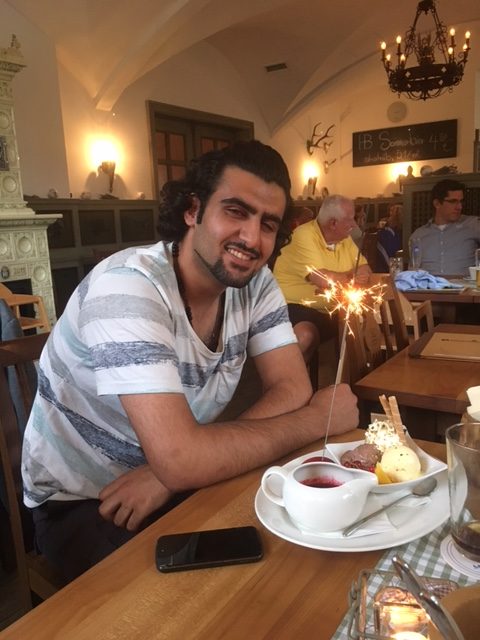 [This post was originally published in the Cincinnati Enquirer and is reposted by permission of the author.]

Our faith calls us to love our neighbors as ourselves – even when we meet them as strangers.

How do you practice this on your journeys?