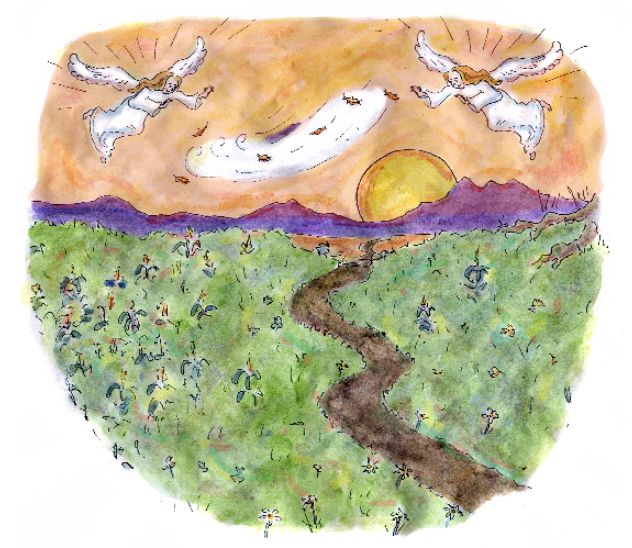 September 29 is Michaelmas, also known as the Feast of St. Michael and All Angels, and there are lots of ways to celebrate the day with children. Below I’ve offered some background about angels and their feast day, followed by a simple liturgy for a festal meal, including a link to suggested foods for the party.

To enhance your celebration of Michaelmas, here is a link to a game (Pin the Angels on the Ladder) and an outdoor adventure. If you have kids who like to color, links to six line drawings taken from the book Season of Angels can be found on the book’s website. 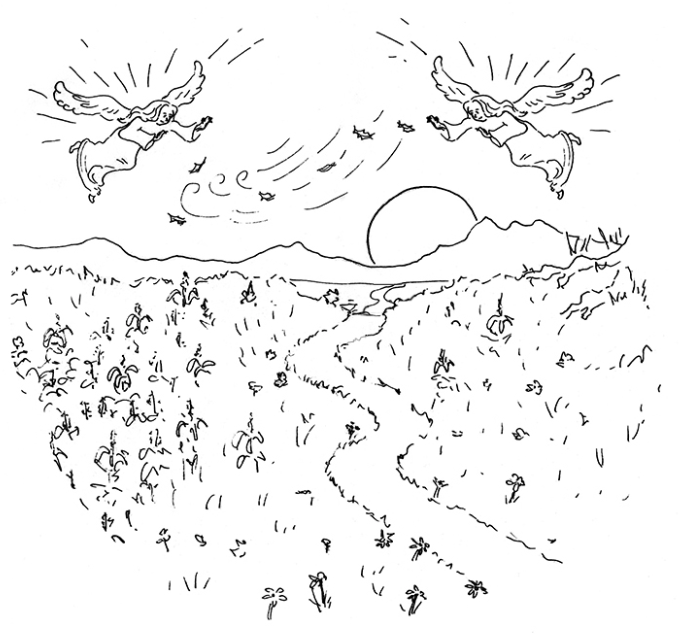 In the late 19th Century, the Rev. Charles Grafton recommended that a child’s introduction to God begin with talk about angels, especially their own Guardian Angel. By introducing children to the angelic protection which surrounds them, parents can give them a deep sense of God’s personal, individual love and concern.

Our word “angel” comes from the Greek aggelos, meaning “messenger.” Angels come from God, sometimes with specific messages for specific people, sometimes simply with the message of love. Angelic messages can come through other people and through the natural world.

Angels appear in about half the books of the Bible and are mentioned over 300 times. Of the named archangels, Michael is the leader; he is referred to as the angel of righteousness and is noted for his mercy. Mystical writers equate Michael with the Holy Spirit in Christian understanding and the Shekinah, or Presence of God, in Jewish teachings. Besides being a warrior angel, Michael is named the benevolent angel of death, for it is Michael who weighs the souls of the dead.

Gabriel is the heavenly messenger, a special angel of the Christ. Islamic tradition sees Gabriel as the 10th and final archangel, the one who rules over the human sphere and all that lies below it; as such he is called the Angel of Humanity. Gabriel is also noted for his courage.

Raphael appears only in the Book of Tobit, and it is Raphael’s story of companionship and compassion that’s told in Season of Angels. Raphael is especially noted for the quality of love.

The Eastern Church says that since the Christ always existed, any appearance of angels in Hebrew Scripture should be seen as partial manifestations of Christ. This recognition of Christ as both preexistent and contained within angelic visitors is echoed by Native Americans from the land of the Anishinaabe, who name Christ as being with them throughout their entire history – even before they knew his Name – as an angel or a guiding spirit.

In both Scripture and tradition, angels also fulfill the function of gateway – or bridge – between heaven and earth. Jacob’s ladder, of course, is the most striking visual image of their movement between the realms, but whatever words or images we use to describe angels, they serve to remind us that we live within their care and protection. As the Archangel Raphael watched over Tobias, so is every one of us protected by an angel who holds us in the heart of God. Suffering can’t be avoided, but if we can hear the still small voice inside us and sense enfolding wings around us, we can find our way through such times and trials:

For God will give holy angels charge over you, to keep you in all your ways. (Psalm 91:11)

Click here for ideas about what foods to fix. (Be sure to allow time for preparing both the food and the table itself.)

At the start of the meal, teach your children the appropriate responses and gestures:

“God was with them:” the children respond while stretching out their arms, palms up.

“God is with us:” the children respond while hugging themselves, arms crossed with hands on opposite shoulders.

After each blessing, teach them to respond “Amen.”

Festal Meal Liturgy for the Feast of St. Michael and All Angels

An adult should light a big candle and say: Light and peace, in Jesus Christ our Lord.

Adult continues: When God called the Israelites out of Egypt, an angel led the way as a pillar of fire in the night. Later, when the people were lost in the wilderness, God rained down manna for them to eat and gave them grain from heaven. So people ate the bread of angels.

Children (with arms outstretched, palms up): God was with them.

Children (with arms crossed, hands on opposite shoulders as though hugging themselves): God is with us.

Adult: As the guardian angel Raphael guided Tobias and Sarah on their journey,

Children (arms outstretched): God was with them.

Adult: As our own Guardian Angels comfort, protect, and guide us,

Children (arms crossed): God is with us.

Adult: And now may God bless us and keep us.

Adult: May God send holy angels to be our guardians and guides.

Adult: May God’s holy angels dwell in our hearts and be our companions always.

(Editor’s note: Season of Angels is on sale right now from Forward Movement!)

How do you celebrate the feast of St. Michael & All Angels?