For: all PKs (priest kids), those who are raising them, and those who know them. Plus, anyone who has been subject to unfair expectations (so basically, all of us).

I was holding my three-month-old the first time someone called her out as having special expectations because she was a priest’s kid.

“What do you expect?” said one mom to another. “Of course, she won the costume contest. She’s the priest’s kid.”

I looked down at my sleeping daughter, absolutely adorable in a caterpillar costume that her grandmother had lovingly, painstakingly made. The butterfly wings that I wore drooped. I had known intellectually and anecdotally about the not-so-great expectations of PKs, but this was the first time I felt the gut punch. It wasn’t the last. (And for the record, she won the under-2 costume contest because her caterpillar was the cutest. IMHO).

A few years later, I was giving a bottle to our infant son when our toddler daughter walked up to her daddy (the priest) while he preached from the aisle. Without missing a beat, he picked her up and continued. Afterward, I was scolded by a member for not having more control of my children.

When our son was seven, a vestry member raised an issue during a meeting. They told my husband in a vestry meeting (!), that some people didn’t like that our son occasionally played with my phone or an iPad during worship. This time, I wasn’t wearing butterfly wings, but my hackles rose. He’s seven and sometimes wiggly. Would they prefer he roll under the pews? Seven-year-olds don’t always have an hour’s worth of quiet attention. And, was the vestry member calling for a ban on all iPad and phone usage during the service or just for the son of the priest? 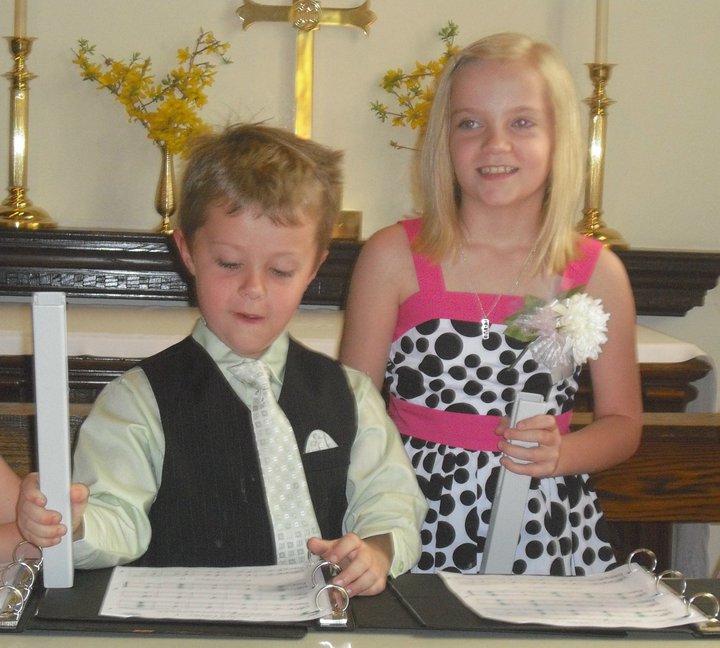 A day (many years ago) when they both were excited to ring chimes in church.

My husband and I have tried very hard to make sure that the expectations we have for our children in church are ours, not those imposed by others. When our son puts on (nice, leather) flip flops, I stop and try to filter whether it’s my fear of what others will say or whether I think they are inappropriate. He gets to wear them. When our daughter comes down the stairs in shorts showing a hint of cheek, I stop and think about whose expectations I’m letting govern my decision. That’s an easy one: Mine. And she heads back upstairs to change. When they don’t want to go to youth group, Sunday School, or children’s choir, we try to discern whether it’s laziness, apathy, or that the activity is really not the right fit. We don’t expect other children in our congregation to be at the church every time the doors are open. Ours shouldn’t have to be there too.

Being a priest’s kid is hard (although frankly, being a kid is hard too). But there are some extra expectations for the children of priests. People assume that the children are either pious, Bible-toting, goody-two-shoes, or rebels raging against the machine, God, and their parents. Most PKs are somewhere in the middle, trying to find out who they are and who they want to be. Foisting our expectations on them isn’t fair. And it makes this mom’s heart ache.

We are not alone in facing not-so-great expectations. Children of teachers and community leaders have a particular set of expectations too. Frankly, we have all been hemmed in by expectations. You’re tall, so you must play basketball. Except you’re an artist and an ice skater. You’re from Appalachia so you might be a little slow. You’re poor so you must be lazy. You’re fat so you must not have self-control. You’re rich so you must be happy.

One of the great lessons of Jesus’ life is his overturning of expectations. A king born in a stable? A child teaching the teachers? A rabbi eating with prostitutes and lepers? A savior dying between two criminals? Jesus’ unexpected life (and death and new life) urges us to set aside our expectations and preconceived notions, to love instead of judge, to be amazed by what is, instead of what ought.

How have you seen expectations hinder the growth of clergy kids? of anybody?