Some things just go together, like Saints Simon and Jude. These two separate Apostles are celebrated on the same day because legend has it that they were martyred together after refusing to offer incense to idols in Syria. This same legend also suggests that their presence and ministry actually stopped a potentially bloody war between Persia and India.

The mythic travels of Simon and Jude warranted enough devotion that an entire window in Chartres Cathedral in France was commissioned to tell it. The window, which contains 22 frames, depicts the two saints facing off against Satan in the form of an idol belonging to Persian general named Baradach. 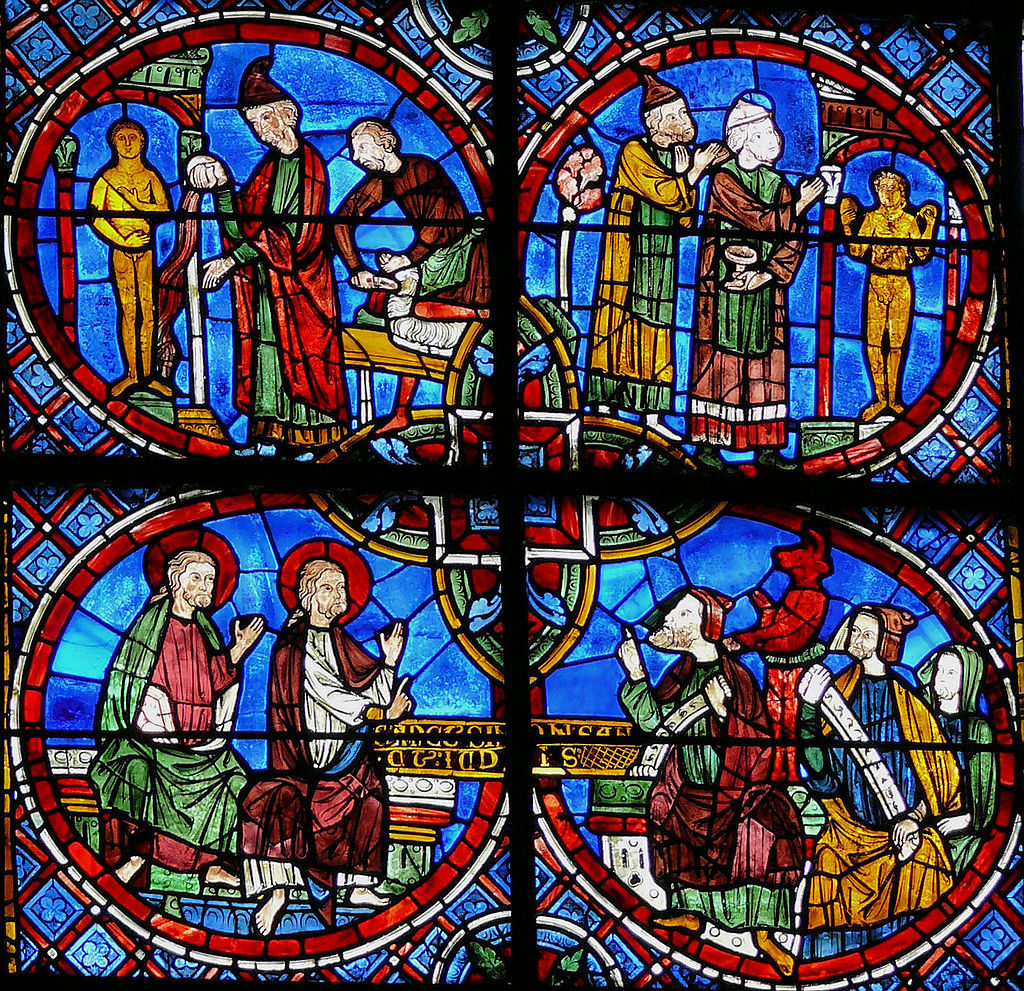 As the legend is told, Baradach was involved in a war with an army from India, but when he went to consult his gods as to his next strategy, they were unusually silent. Baradach went to consult another idol who said that the presence of the two Apostles near the camp rendered the idols unable to speak. Baradach returned to the camp and detained the two Apostles who used this opportunity to denounce the feckless idols of Baradach and to preach the Gospel of Jesus. To prove it, Simon and Jude told Baradach that they would give his idols permission to speak and that he was to consult his idols and the magicians.

The magicians came back and said that the war would be difficult. The Apostles had another word, one of peace. They predicted that an Indian delegation would arrive the next day seeking peace. When the Apostles’ prediction proved true, Baradach was amazed and word of this event spread far and wide, even to the King in Babylon who was baptized with his entire royal court. The ministry of the Apostles even extended to showing mercy for their ideological opponents by stopping the execution of the magicians.

I find this story particularly important as we encounter great levels of anxiety, partisan rancor, and divisiveness in our national politics. The wholesale inability to reason and respect one another and the denial of human dignity across ideological, racial, and gender difference is nothing more than evil speech from feckless idols. The very presence of Simon and Jude was enough to silence the voices of evil in their time who wanted war and devastation. I wonder if this is not our vocation today even as we face down contemporary voices seeking to do the same.

Now to him who is able to keep you from falling, and to make you stand without blemish in the presence of his glory with rejoicing, to the only God our Savior, through Jesus Christ our Lord, be glory, majesty, power, and authority, before all time and now and for ever. Amen.”

Jude makes clear here, that, in the words of Archbishop Desmond Tutu*:

this is God’s world and that God, our God, is in charge… In a setting that claims we are made for alienation, separation, dividedness, hostility, and war; we must as the church of God proclaim that we are made for togetherness, for fellowship, for community, for oneness, for friendship, and peace.”

The togetherness of Simon and Jude, different though they were, might be a reminder of our call to togetherness and our need to ensure that everything we do and say seeks to fulfill the goal of the peace of God.

O God, we thank you for the glorious company of the apostles, and especially on this day for Simon and Jude; and we pray that, as they were faithful and zealous in their mission, so we may with ardent devotion make known the love and mercy of our Lord and Savior Jesus Christ; who lives and reigns with you and the Holy Spirit, one God, for ever and ever. Amen.

Where are you called to peacemaking today?