When I was little, someone always seemed to be praying. We prayed at meals, before bed, about hard things, in hospital rooms, at church, in the car…someone was always praying or asking for prayer or being prayed for. At least that was how it seemed.

I’ll grant you that I grew up in a family where something slightly abnormal was usually happening—my dad was chronically ill for much of my life, and so we spent a lot of time waiting between doctors’ visits and appointments in some pretty anxious postures. We were a praying people—and no one had any problem putting their hands on your head and talking to Jesus out loud about whatever was going on at the moment. As strange as that may sound to some folks, there is a deep comfort in that kind of companionship and love.

As I grew older and we became involved in the Episcopal Church, praying remained a cornerstone of our family life and The Book of Common Prayer became a tool I used as often as I could. I was one of those kids who would read anything you put in front of me—books, cereal boxes, shoe polish bottles, instructions—I craved words. The older I got, the more I realized that the words I craved most were the ones that were comforting and calming, and some of those words were ones I found in the Collects and prayers in the back of the little black Book of Common Prayer I’d been given as a confirmation gift.

I packed that book as faithfully as I packed underpants or toothpaste for a trip. I didn’t always use it, but having it in my bag or backpack helped remind me that no matter what happened, I could find a way to pray, and things would be ok—maybe not great or wonderful or all good, but things would be ok. My husband and I talked about my love for the Book of Common Prayer on our first date, and he gave me a copy of the 1833 edition for my 34th birthday. 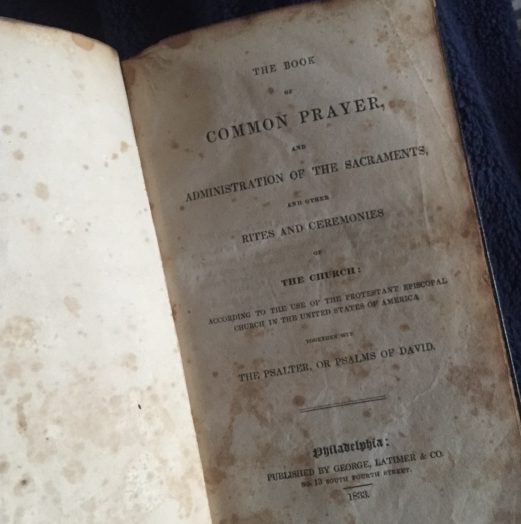 I was probably the only kid in my Survey of Western Literature class who also had a Book of Common Prayer in her backpack, but I didn’t mind and probably no one else even knew. That little black book went every where with me. And one day, on a particularly scary day, it probably saved my sanity.

I had driven to Austin to see a friend on a Friday night, and got up Saturday morning to drive back to San Marcos. This was in the good old days of the late 1990’s, when that drive down I-35 only took about 45 minutes in normal traffic. This day, almost 20 years ago now, was not a normal traffic day. Rain was falling in sheets, semi-trucks were crawling at 25 mph, and everyone on the road had their hazard lights flashing. Driving in that kind of rain is noisy, and on this day, the sounds were deafening. I kept waiting for the cloudburst to pass and for the rain to ease up, but it didn’t. I finally made it to my exit.

As I wound my way to campus, I just kept thinking about how happy I would be to get out of my car, take a hot shower, and sleep off the tension of driving through all that mess. And then I saw the bridge I needed to cross to get home…and it had about two feet of writhing white water careening off the top of it. There was no way to get over it. So, I went to one of the only other place that seemed close enough to find safely—Saint Mark’s (now Christ Chapel) Episcopal Church, where I hung out with other members of the Episco-posse on Sundays and Wednesdays and most other days. The building was locked up tight, which was ok with me, because the parking lot wasn’t flooded. After I parked, I started to cry. Then I did what many 20 year olds do when they are freaked out and called my mother, who (of course) prayed with me on the phone.

I called one of my friends from Saint Mark’s who lived on the dry side of town, and asked if I could come hang out at her house. She very kindly said yes, and I headed on over. Through my tears and frantic breaths, I made it across town. We were safe! And then two hours later, a dam upriver broke, and water began to stream into the parking lot. We moved our cars to higher ground and were drenched to the skin in the process. We moved her roommate’s wedding dress, wedding invitations, and pet bird up to the second floor neighbor’s apartment—and got even wetter. We waited to find out if we were going to be evacuated. We waited and it rained and we waited some more and dreamed about dry underpants, because the power was out and if we had to get out, we’d just get wet all over again. And in the meantime, we sang every church song we could think of. I remembered my little Book of Common Prayer and we prayed some of the prayers in it, too. 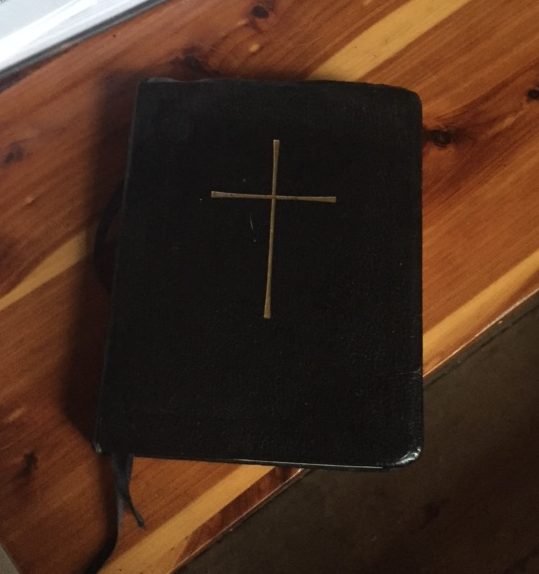 The rain tapered off sometime around midnight, but the apartment management people insisted we sleep in an upstairs apartment, since we couldn’t get to any of our other friends’ houses. The same neighbors who sheltered the wedding dress and wedding stuff sheltered us for the night. I’ve never been more grateful for a dry floor and blanket in my life. I’d like to tell you I read Compline to myself before I went to sleep, but I didn’t. I did sleep with my head on my backpack, in which was my little Book of Common Prayer, so that counts for something at least, I guess. The water was much lower the next morning, and I was able to make it back to my own apartment, take a shower, and get some actual bed-sleep. The relief I felt was immense.

Life has moved on, the river has moved on, I have moved on. But I still always put my little book in my bag before I leave my house on an overnight excursion, even if the weather reports seem fair. I’ve found myself leaving through its pages on airplanes, or while I’m waiting to hold a baby or say goodbye one last time. I’ve pulled it out in the middle of national parks, prayed along with it on 1000 thread count sheets, and sometimes just held it in my hands and prayed my own prayers, confident that God has heard everything I’ve said, and is doing for me far more than I could ask or imagine.

I am profoundly grateful for the gift of this little book—and even though I’ve been given many copies over the years, I still prefer the one I received at my confirmation—because it has been a companion to my soul for 26 years. And it makes a half-decent pillow, too.

When have you reached for your prayerbook in a difficult time?