The aftermath of World War I saw a dramatic increase in nationalism that threatened to tear the world apart along the arbitrary geographical boundaries of nation-states. Into this rising tension, Pope Pius XI introduced a new feast in 1925 – the Solemnity of Our Lord Jesus Christ, King of the Universe. The purpose was clear: to remind us that our commitment to Christ and the Reign of God he championed must transcend the lines of division we draw between us.

As I searched for images of “Christ the King,” I could only find images that displayed Christ in majesty, flanked by heavenly beings or earthly kings. He always seemed to wear a huge royal crown with a scepter in his hand – two symbols that convey power and authority. It makes sense and under normal circumstances I wouldn’t think twice about it. But lately I have been reflecting on what it means to have Christ adorned in earthly, temporal power. Isn’t that backwards? Isn’t our Christian truth supposed to reimagine the world adorned in Christ’s glory?

And then I found this image of a “Crown of Thorns” from the German War Cemetery in Lerchenberg. It is simple, stark, and severe, communicating a message more powerful for me than any earthly diadem of gold and jewels. 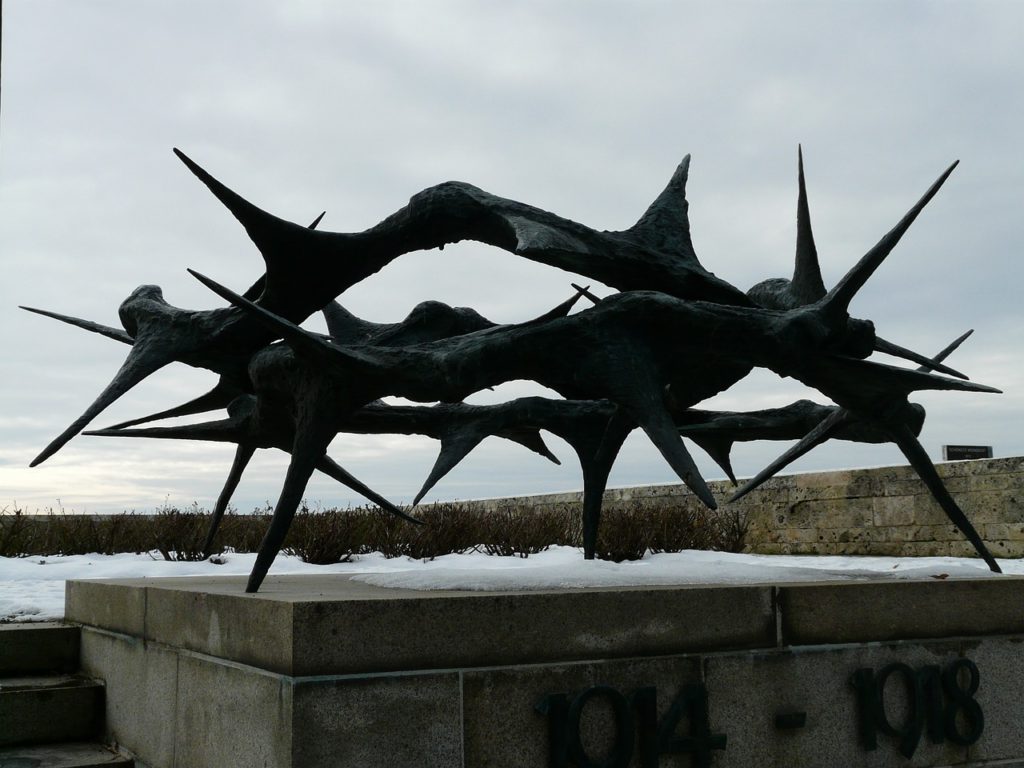 The truth I see in this crown is this: In Christ’s kingdom true power is found in humility and service, not ostentatious shows of strength and prestige. Self-giving love, not self-aggrandizement, is the hallmark of the Commonwealth of God.

The more things change, the more they remain the same. It appears that our world is still fraying along lines of race, class, sex, religion, and nationality. We find it so difficult to speak to people across these and other barriers; we close ourselves off from the God in the other. And yet the Crown of Thorns reminds us that with Christ there is “plenteous redemption.” Through his example we have a way forward together. Division and estrangement need not be our portion.

A common adage I heard growing up is: it starts at home. I am unsure if that rings true for the severity of our current divisions, but certainly our families have a significant influence in how we learn to live and be in the world. What would it mean for healing if we called up the local Islamic Community Center and asked to be connected with a Muslim family to share meals and experiences? What would it mean if we allowed our kids to join a scout troop or sports team with people who didn’t look like them or volunteered with a local faith community that wasn’t our own? What might it mean to the wideness of our individual worlds if we took the upcoming holiday season and learned about the Feast of Our Lady of Guadalupe, Hanukkah, Kwanzaa, and Bodhi Day with our families? Our families can be incubators of the Jesus Movement simply by stepping just beyond ourselves.

Christ’s reign is one which compassionately destroys the lines of division and invites us into family and community with God. As the prayer book so eloquently states, he “stretched out his arms of love on the hard wood of the cross that everyone might come within reach of [his] saving embrace.”

Maybe in a time of such fierce division we are called to be even more zealous for God’s reign, and open ourselves up to one another to listen, to learn, and to love.

Almighty and everlasting God, whose will it is to restore all things in your well-beloved Son, the King of kings and Lord of lords: Mercifully grant that the peoples of the earth, divided and enslaved by sin, may be freed and brought together under his most gracious rule; who lives and reigns with you and the Holy Spirit, one God, now and for ever. Amen.

What one word sums up the reign of Christ for you?