[Click here for parts one and two in this series.]

“Could you connect Los Angeles to El Paso for me, and give 15 points to black? That makes four completed tickets and I have a train running coast to coast!”

My wife and I had our friends–a Baptist youth minister, his wife, and two teens–over for Family Game Night. The teens hadn’t picked up their phones a single time, and were enthralled by the mechanics of building a railroad empire in 20th Century America. It got loud, it got tense, it got hilarious. Like always, it was my shy, quiet, unassuming wife that beat everyone else easily and won by 40 points.

“We HAVE to do this again!” our friends said. I replied gleefully, “Sure, next time we can role play mice trying to escape the evil Queen’s castle and work together to defeat the rats as they track us through a mouse sized world.” They left with plans for us to come to their house next month, and we all felt wonderfully connected and refreshed. On other nights I spent time with a room full of High School students arguing over who the Werewolves were, or who would win a Superfight between a ten story tall Miley Cyrus with a team of trained velociraptors and Elvis in the Popemobile with machine gun arms.

We live in the golden age of board games. There are games for every make, model, and interest you can imagine. Some are cooperative, some are competitive, some are just downright silly, but they all teach us about each other, ourselves, and how we face the world together. 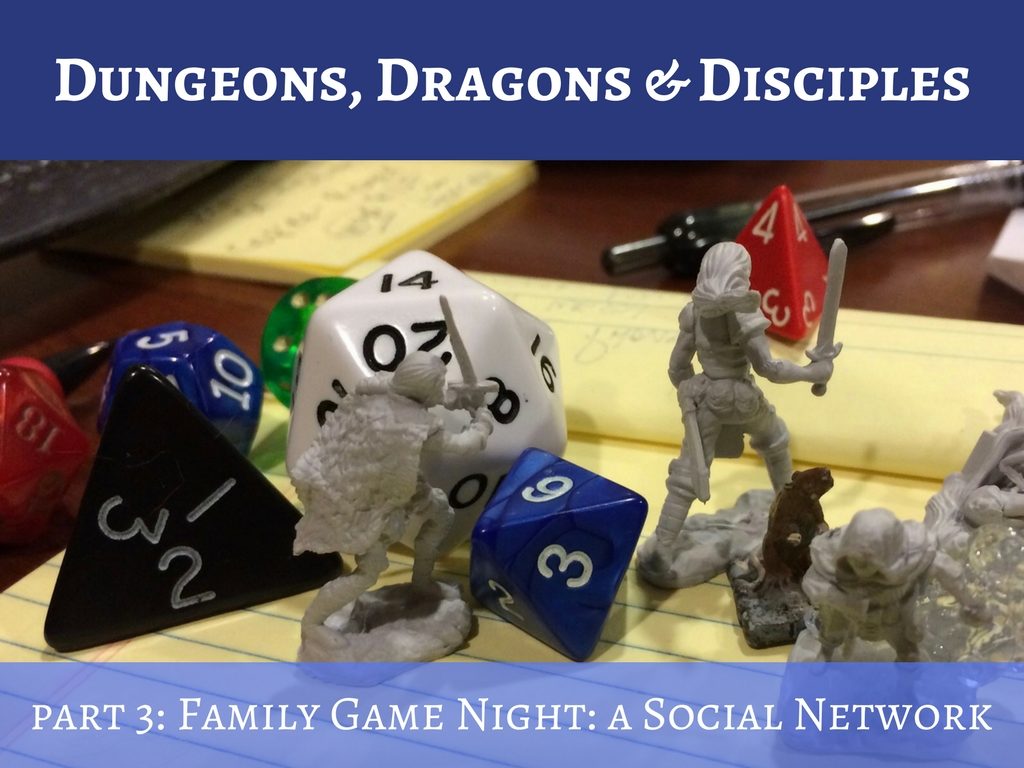 Our first church wide Family Game Night was a massive success. Each family was asked to bring a game and a snack to share. It was a small congregation, but the parish hall was packed. Phones were ceremonially shut off or silenced. We said a prayer to welcome the Holy Spirit into our hearts & our families.

I watched each of us laugh, hug, walk away in frustration, and deal with each other. Teens played cards with retirees. Families sat together. Singles were welcomed to the table and made comfortable. Everyone left that night wanting to do it again.

All of these memories: at home, at youth group, at an intergenerational event are full of people, not devices. People who left feeling closer to each other and grateful. People with smiles on their faces! Whether we saved the world from a pandemic, quested for a king’s lost treasure, or launched balls painted with angry avians at porker painted cardboard, each night we all did the same thing: we healed each other, came closer to Jesus, and took a break from the technology that haunts us perpetually.

If you are not hosting a regular Family Game Night in your family, please try it. If you’ve never organized one at your church please give it a shot. The benefits of shifting focus from “them” on our phones to “you” right in front of me are priceless. You will see teachable moments present themselves. You will watch generations support and educate each other about “life.” Bravely set a date, invite a few friends, make sure they are fed, and set them up with a game to play.

Give them the idea that they are playing with people made in the image and likeness of God. The Holy Spirit will take care of the rest.

This is a document about games suggestions: why they are valuable, where to find them, and what you get from them.

Have you hosted a game night? Would you want to?