Why Saul? In all the people of the early church who were working to spread the news of Christ’s life, ministry, death, and resurrection…why did Jesus choose Saul to become one of the most remembered and quoted saints?

Most of us know the story, told three times in the book of Acts (chapters 9, 22, and 26). But I think we need to backtrack to the stoning of Stephen in Acts 7, and one oft-forgotten but profound sentence at the very beginning of Acts 8, to really understand the significance of the conversion of St Paul, celebrated today, January 25.

Saul is a tentmaker (Acts 18:3) from Tarsus, born into a Jewish family and raised in the strict Jewish sect known as the Pharisees, who were devoted to an unbending adherence to Mosaic law. We first hear of Saul at the end of Acts 7, when he observes Stephen being stoned to death. He is not described as a participant, but he is brought to our attention as more than a disinterested bystander:

Then they dragged him out of the city and began to stone him; and the witnesses laid their coats at the feet of a young man named Saul. (Acts 7:58)

And Saul approved of their killing him. (Acts 8:1)

Thus begins Saul’s targeted and energetic persecutions of all who would proclaim the Word. Saul is described as “ravaging the church by entering house after house, dragging off both men and woman, [and] committing them to prison.”

Saul seems to be in the grips of a manic lust for the downfall of Christ’s followers. Like the apostles before him, who dropped their fishing nets to follow Jesus, Saul abandons his life as a tentmaker to chase, track down, and imprison Christ’s followers, even asking for letters from the high priest so that he can go to Damascus to continue his campaign against the disciples of the Lord.

And that’s where it happens. On the road to Damascus, Jesus stops Saul in his tracks by appearing as a blinding light, brighter than the midday sun, and striking Saul blind. And Jesus asks, “Saul, Saul, why do you persecute me?” (Acts 9:1-4) 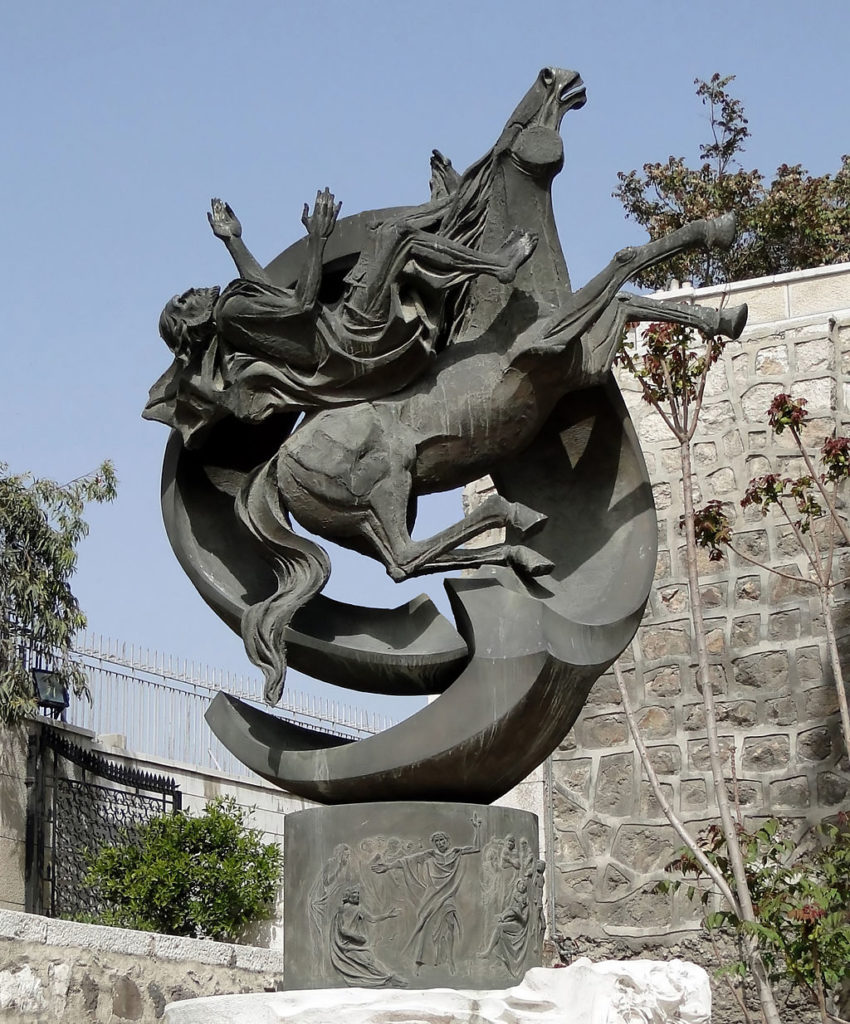 By Bernard Gagnon (Own work) [CC BY-SA 3.0], via Wikimedia Commons.

This is a bible story I think we neglect with children. What kid doesn’t like a story in which the evil villain is struck down supernaturally? And kids relate deeply to stories of redemption because they need to know our love is constant no matter how big their mistakes. But I think the real question, the most important part of the story, is the least considered:

Shouldn’t Saul be vanquished? In the underdeveloped plots of most kids’ movies, Saul would fall to an inevitable but unseen death at the bottom of a deep chasm, or be swept away, again non-violently, in a stormy sea. But that’s not how God works through the Son and Savior Jesus Christ. Christ came to save us, not to vanquish us. When we are figuratively blind to the word of God, Christ continues to love us and to work towards removing the scales from our eyes.

Why Saul? Because we are all, in our own times and in different ways, Saul.

And in Saul I often recognize the passionate energy of my own boys and so many other children I’ve worked with over the years. Fiery children who seek almost constant sensory input and are incessantly busy. Children who were never going to be able to sit quietly at their desk and write organized thoughts in their journals, but whose imaginations brimmed endlessly with stories too big to fit in the confines of a pencil and a spiral notebook.

Like Saul, who after his encounter with Christ becomes Saint Paul, one of the most prolific, vigorous, and passionate proclaimers of Christ’s message; these are the children with the strongest potential to change the world. Given a solid foundation of compassion, empathy, love of God and neighbor, these children will be the problem-solvers and peacemakers of the next generation.

So we must embrace and guide the fervent, if exhausting, energy of our passionate children. We must fuel them on the stories of our faith and teach them to see and speak against injustice. We can help these kids build strong hearts for empathy and compassion by engaging them in outreach, using their energetic creativity to raise up those Jesus called ‘the least of my brothers and sisters.’ These young Sauls, brought up in the Word of Christ and taught to know and embrace the inspiration of the Holy Spirit, have the potential to match Saint Paul in energy and courage. Thanks be to God.

A ‘Blessing Box,’ built and planted through the energy and passion of Young Episcopalians in Service (YES!) Colorado for Salt Lake City churches, Summer 2017.

Who in your life reminds you of the pre-conversion Saul?