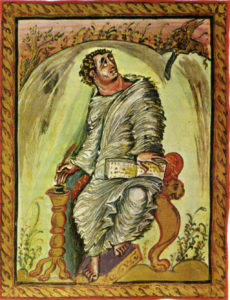 “The beginning of the Good News of Jesus Christ, the Son of God,” begins not with Jesus Christ, but with John the Baptist, and this matters a great deal. Jesus doesn’t spring out of the ground or fly in from the eternal realms of glory outside of the larger context of God’s loving work of salvation. He was born it, steeped in it, formed in it and, in concert with being raised by Mary whose “Song of Praise” (the Magnificat) shows that she was well aware of it as well, it seems as though the stage was perfectly set for the Son of God to enter and inaugurate a new phase of God’s movement. The “fullness of time” indeed.

Legacy matters. Who we are as individuals matters, but each of us also exists within and is nurtured by a context. Family, culture, and geography shape us whether we are aware of it or not. Everything we do, or don’t do, communicates something to us about priorities and values. As I tell people all the time: we are being formed into something. It is up to us to choose to be formed into the image of Christ.

One of my favorite parables occurs in just four verses of Mark’s Gospel. In Mark 4:26-30, Jesus tells the “Parable of the Growing Seed.” The parable suggests that, after being sown by the sower, the seeds grow in secret and almost without much effort from the sower. In fact, the parable almost makes the point that the sower doesn’t grow anything. The sower merely creates the best environment where growth is possible, but growth is up to the earth and the inherent potential of the seed.

That being said, the sower still sows.

We are both seed, planted by God, and sower, called to partner with God in sowing the garden of the renewed Creation. When it comes to formation, we must ask the question: what are we sowing? In what are we grounded? It is unreasonable for us to expect a harvest where we haven’t sown anything. We can’t expect a robust spiritual life when we aren’t praying, reading scripture, attending public worship, and caring for those in need on an ongoing and sustained basis. We can’t expect peace when we are either ignore the cultivation of peace or actively feed violence and fear. We can’t expect joy with working to build a joy-filled life.

Mark is very clear about the context within which the ministry of Jesus Christ flourished. It was within the prophetic, loving, and courageous community of people like John the Baptist and Mary the Virgin and many others that Jesus was able to develop to real world skills to charge head first into the power of sin and destruction in order to prove it to be a false god and an unsustainable way of living. He was the seed planted in the earth by God, nurtured by his family, community, and faith, who grew up to become a tree whose arms of love were stretched out so that all might come within the reach of his saving embrace.

But the question still stands for us to consider: what are we planting? What environment are we creating to support that growth? In what are we grounded? How are we being nurtured?

The Collect for the Feast of Saint Mark:

Almighty God, by the hand of Mark the evangelist you have given to your Church the Gospel of Jesus Christ the Son of God: We thank you for this witness, and pray that we may be firmly grounded in its truth; through Jesus Christ our Lord, who lives and reigns with you and the Holy Spirit, one God, for ever and ever. Amen.