Three months ago I finally carved out time to read the parenting book a church speaker recommended in the fall. This speaker has the reputation of being the local parenting guru so when she said it was the best book on parenting she’d ever read, I immediately saved it to my Good Reads list. The book, How to Raise an Adult, was written by Julie Lythcott-Haims, a mom of teenagers who also happens to be a former freshmen dean and advisor at Stanford University. So she certainly knows a few things about the consequences of over-parenting.

As happens with most parenting books, I quickly read all the things I was doing “wrong” in how we were raising our two children. What was different about this book though, is that I didn’t roll my eyes with each new discovery.  I actually believed what Lythcott-Haims wrote about the detrimental effects of over-protecting and over-parenting our kids. And more importantly, I saw how closely it connected to our faith.

After finishing the book and talking to my husband, I made two intentional changes in how I was going to parent our children who are in first and third grade.

I realized how many of my parenting choices were driven by fear of the stranger or the unknown. My small bit of knowledge about human trafficking overwhelmed me with the idea that our kids would be kidnapped if they walked alone anywhere. My fear of broken bones made me prohibitively cautious on playgrounds. My nine-year-old’s ability to not notice most of his surroundings made me anxiously fearful every time he climbs onto his bike. It’s for this reason that I was still holding his hand crossing the street.  Did I mention he’s a nine-year-old?  Go ahead, friend, roll your eyes. I deserve it.

These children are such precious gifts to me and I only get them this one time.  If something happens, then that’s it. So, I’ve spent my entire life as a parent overprotecting them. As I read through this book I realized that most of my fears were unfounded and that I’m stunting their development by parenting in such a way. Children are rarely abducted by strangers, especially when they are traveling as a pair. My son, though he seems to live entirely in his head, is actually capable of looking both ways before crossing the street. He just doesn’t because I’m doing it for him.

And most importantly, I remembered that as Christians God calls us to move away from fear and into a life built on hope and trust. I found myself recalling the words God speaks to Abraham when he was still Abram in Genesis 15. Before God lays out the covenant with Abram, God says, “Don’t be afraid. I am your shield.”  Allison, don’t be afraid. God’s shield is around my children and so is my almost-as-powerful mothering shield.  They’re not impenetrable, but most certainly are present.  I’m easing up and letting go a little bit.  I’m far from being a “free range parent” but my kids are walking up the street alone for playdates and I’m no longer reaching for hands in parking lots.  We are all growing stronger because of it and I’m actually feeling less anxious as I relax in some of these areas of parenting, the opposite of what I expected to feel.

I thought that was the hard change. Ha! It’s taken more restraint than I knew I possessed to let my kids do the things that they can do on their own.  First, I showed them the dog’s medicine and proper serving size, so now they are responsible for her breakfast and dinner each day. I taught them how to ball socks and fold t-shirts so they could take ownership over clean laundry. I showed them how to set the alarm on their clocks so could be in charge of waking up on their own during the week.

This alarm clock change resulted in them rising far earlier than they had been because now mommy wasn’t offering a first, second and third wake up call. They actually got out of bed when their alarms buzzed. Modern parenting miracle! With all this extra time my six-year-old wondered if she could start having hot breakfasts before school.  I always told her before there wasn’t time for me to cook, but now she had the time. Additionally, we were in this pattern of me teaching her new skills that she could then do on her own. She already knew how to crack and egg, but I showed her how the electric range works, where the egg pans live and three different ways to cook an egg. After promising that she would never cook without a parent in the kitchen, I set her loose. 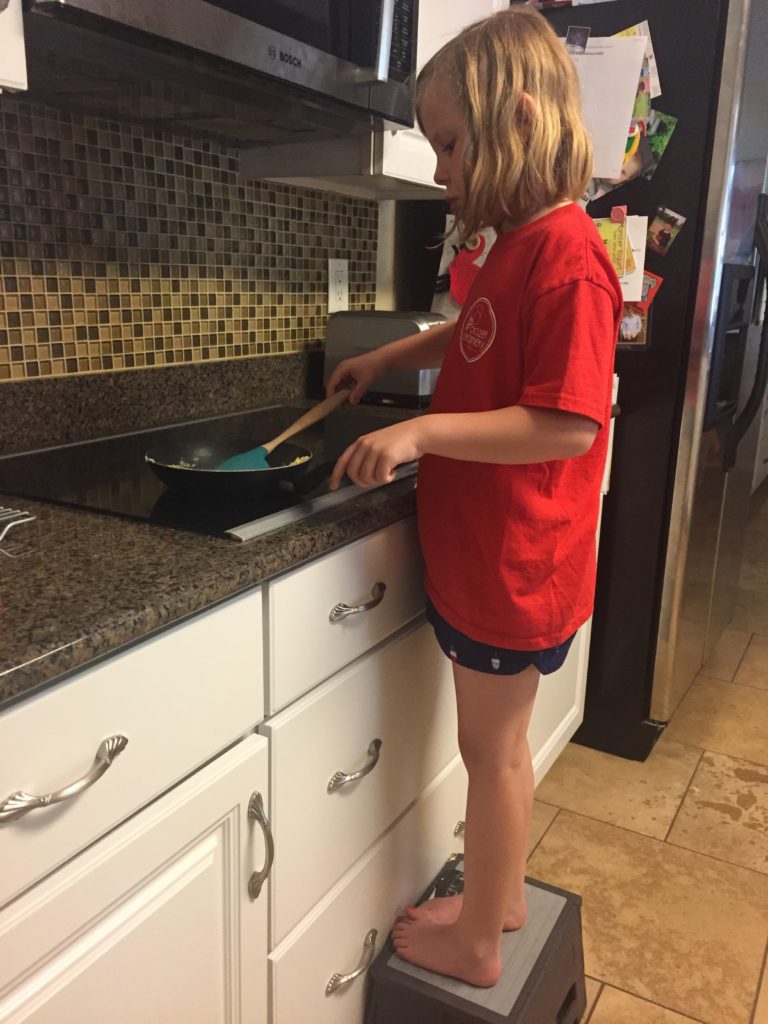 This was my aha moment.  If my first grader can confidently and competently cook herself an over-medium egg, what else can she do on her own?  What else have I been doing for her that she can (and should) be doing by herself? I began examining every action I do for or on behalf of my kids, and asking if I’m the one who should be doing it. From unpacking lunchboxes to tying shoes to finding the missing library book, I’ve been handing over responsibilities left and right, and that includes letting them take responsibility for their relationship with God.

Over the past two months we have totally swapped roles in our bedtime prayers. Before I was offering the bulk of their audible prayers and then inviting their intercessions, but now they’ve taken the lead and I’m the one voicing a couple names when they prompt me. Watching and listening to them take ownership over their prayer life taught me that I don’t need to pray on their behalf or put their words into prayer,  because I’ve been preparing them to do it on their own nearly every day of their life thus far.  As soon as I closed my mouth and got out of the way, their conversations with God took off. I now hear my daughter praying from her booster seat when an ambulance passes us on the road. I hear my son praying after he turns out his reading lamp at night. Their prayer life is now just that, “their” prayer life.

How is fear inhibiting your parenting?

How do you foster independence in children?