At some point I was told that adults were the only ones with true wisdom and knowledge.

And then I became an adult and a parent (not particularly in that order), and started to doubt the validity of that statement.

One of our ‘lesser’ feasts is that of Joan of Arc (or Jeanne d’Arc), whom you might visualize as Milla Jovovich or Ingrid Bergman, depending on your generational film preferences. “The Maid of Orleans” was thirteen years old when she began having visions of the saints speaking to her. The daughter of peasants in northeastern France, she found herself carrying the message of the saints to the not-yet crowned king of France, Charles VII, assuring him that his efforts to reclaim France from English hands was going to be successful. He placed her at the head of that campaign and she accompanied them to victory. 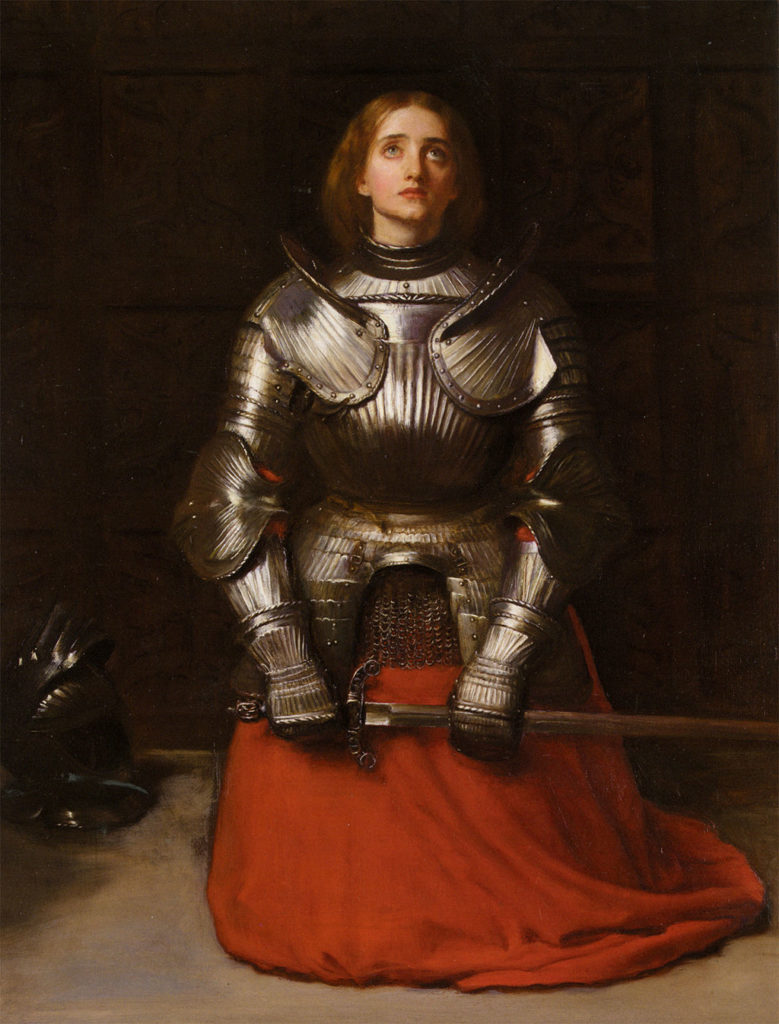 Seen as a romantic tale of impossible, unsung, underdog faith and courage, Joan of Arc can present as a religious fairy tale that we tell our children when we want them to feel uplifted and inspired.

But as a parent reading the story of a saint, specifically a saint who was a child, who participated politically, socially and theologically in the making and unmaking of a nation, of holding on to the truth that God had offered her in prayer and vision—well. Well, perhaps my true hopes for my own daughter prefer her staying closer to home, safety and neutrality.

Recently in the news, I have seen with wonder and awe the young(er) people in our country standing up for what is right, true and good.

In the wake of gun violence and killings in their schools.

In marching for peace.

In loving their neighbor or classmate as they are.

In telling out their Good News of the sacredness of life, even if they don’t mention God or Jesus once.

I see all of this and I am grateful for their witness. I am also simultaneously torn as a parent between my desire to keep my own children safe, secure and protected, and my deep belief that God has called our children to dream, demand and enact the Kingdom of God in ways we, sort-of-adults, have not been able to yet.

The collect for Joan of Arc’s feast day is deeply beautiful: Holy God, whose power is made perfect in weakness: we honor you for the calling of Jeanne d’Arc, who, though young, rose up in valor to bear your standard for her country, and endured with grace and fortitude both victory and defeat; and we pray that we, like Jeanne, may bear witness to the truth that is in us to friends and enemies alike, and, encouraged by the companionship of your saints, give ourselves bravely to the struggle for justice in our time; through Christ our Savior, who with you and the Holy Spirit lives and reigns, one God, now and for ever. Amen.

The young bearing witness to power. The complicated love of country. The experience of both victory and defeat (Joan was to die, executed and defamed, at age 19). Naming truth to those who agree with us, and those who see differently. Giving ourselves bravely to the struggle for justice in our own time.

Seems a lot for anyone, especially a child.

And perhaps that is why God can work through our generations of younger people (who, at least in the Episcopal Church, seem to be anyone under the age of 55, but I’m specifically thinking of high school and younger.  Young people are less vested in the self-interest of victory at all costs. They still hold imagination and hope as dearly as return on investment and productivity.

There is a deep instinct to parent with an eye to safety and security. I often wonder what Joan’s parents thought of her political activity and spiritual experiences. I wonder if they rolled their eyes or worried to death about her on the battlefield or begged her to forget her experience of God, that transcending vision of life lived in freedom. I wonder how I might respond to my own children pursuing a vision which would put their own lives in jeopardy, for a truth which I can some days only glimpse.

Joan of Arc reminds me to glean wisdom from my own children. To value their experiences of the divine with the same gravity as I would expect someone to take my own. To examine that line between security and Spirit, and how we learn to parent without giving one up to preserve the other. And to rest in the strange and undoing assurance that God can work through each of us if we are willing.

Collect for Joan of Arc used with permission by Church Publishing]

How do you maintain a sense of security while encouraging your children to bravely become the people God created them to be?