Even though her eyes were swollen and sensitive from days of crying, her heart broken so that she felt she could hardly breath, Mary Magdalene made her way down the narrow, rocky path.  In my mind’s eye, I imagine her mind has been racing towards this moment since she and her grief-stricken friends laid the body of her dead Rabouni, her teacher, in the tomb three days earlier.  In her anxiety to get back to his body, to give it a real and sacred preparation for burial, she probably felt very overwhelmed. Not up to the task, perhaps, and out of her depth to be doing this important thing for the Son of God who had meant so much to her.

Yet on that path that morning, the jar of herbs in her hands, she must have realized that no matter how unqualified she felt—she was the only one showing up. If her Lord was to receive a proper burial, she was the only one approaching the tomb to see that it got done. So she took a deep breath, and approached the tomb. Then, miraculously, she heard him call her name.

For me, one of the most moving pieces of the story of Jesus’ resurrection is the fact that he chose to first reveal himself to those who had stayed with him to the end. The women, who had sat at his feet and wept as the apostles fled, were the ones who took him from the cross, and the ones who returned to make sure he was given a proper burial. They were the ones who stayed, and then returned, when things got hard. And to them he first revealed the triumph of his resurrection. 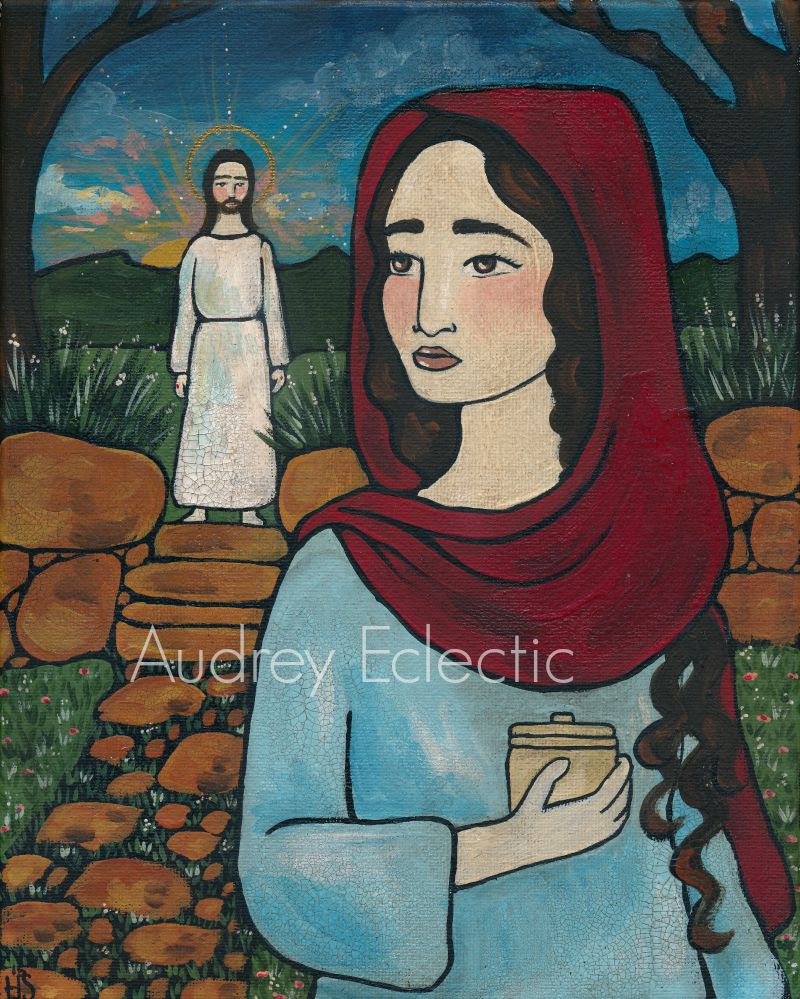 He didn’t choose the Pharisees, or even the Apostles, which might have made for a more blockbuster story. Instead he chose the gentle workers who had shown up to quietly lay him to rest. He chose the ones who showed up, and acted out of their love for him, even when all seemed lost.

There have been many situations in my own life where I felt like I was starting a journey into something that felt overwhelming – where I thought “surely there’s someone more qualified than I am to do this.” But the interesting thing about Jesus, is that he isn’t searching for ‘the most qualified’ to do big things. He’s looking for the willing and open-hearted.

And so on this Feast of St. Mary Magdalene, I’d like to remind you—and myself—that  we are all chosen for great things. No matter our family backgrounds, our past, our complicated relationships, our education (or lack there-of), our social standing, our orientation or our sex – we are meant for great things. We just need to start down the path, and listen for his voice.

[Image Credit: This illustration of Heather’s painting appeared in the book Mary Holds My Hand by Michele Chronister. Used with permission]