Editor’s Note: This is the second post in Meredith Baker’s series on Whole Body Worship. In case you missed her first post on liturgical movements, you can read it here. Thanks! Allison

Capitol Hill in Washington, DC has a higher percentage of deaf and hard-of-hearing residents than many other metropolitan areas, thanks to the presence of Gallaudet University, a bilingual ASL/English college. My Episcopal church on the Hill includes several families, alums, and staff that were connected to Gallaudet. Our priest obtained a grant to fund an interpreter for a Sunday service, which made it easier for deaf and hard-of-hearing attendees to participate in the liturgy. If you haven’t ever seen ASL used during worship, it is a beautiful, expressive way to praise God that transcends verbal language.

When Vacation Bible School rolled around several years ago, our education team chose songs and began to plan hand motions to go along with them. Hand motions are the best! First, kids have something to do to keep their hands busy and second, it really helps them learn the song more quickly. But this time we decided to intentionally make all the signs we used American Sign Language. We wouldn’t teach signs for every word, but the signs we did use would be ASL. My guide was fellow church member Hallie Smith, a Paralympic athlete with the US Rowing National Team who is also fluent in ASL.

Hallie and I met weeks before VBS to choose the children’s songs. She evaluated which ones lent themselves best to signing, we created colorful poster boards with the words and pictures, and then we were off! During VBS, I played the piano, a talented vocalist from our congregation named Emma led the singing, and Hallie signed. 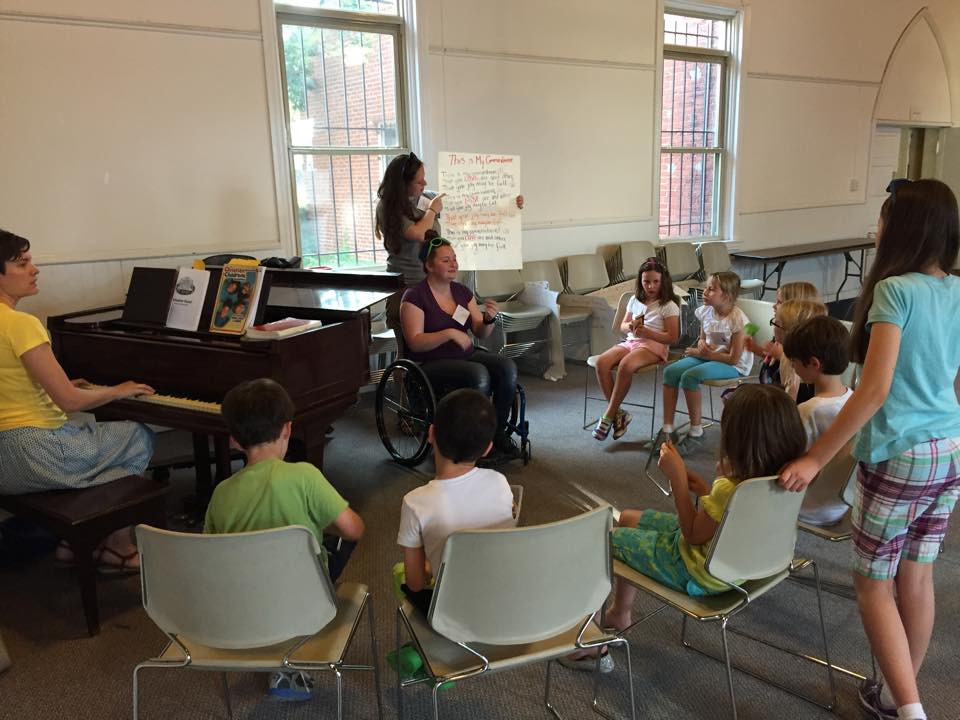 The kids took to it immediately. We sang “I’ve Got the Joy,” “I Will Make You Fishers of Men,” “Jesus Loves Me,” “I’ve Got Peace Like an River,” and other old favorites. Children with hard-of-hearing parents helped the other kids. Hearing children went home asking their parents if they could learn more ASL. The songs were a breeze to teach and the kids retained them. And best of all? VBS participants performed one of their songs at the next Sunday service, and there was no need for an interpreter. For our deaf and hard-of-hearing parishioners, the kids were speaking their language.

The Episcopal Church has its own national organization to serve deaf ministries: the Episcopal Conference of the Deaf. http://www.ecdeaf.org/  They actually encourage all Episcopalians to learn to sign along with songs: “Signing is one of many forms of worship that provide profound meanings. The flowing movements of the signs along with the music can be a beautiful way to enhance the worship experience, even if there is no Deaf person present. You don’t need to understand sign language to appreciate the beauty of a signed hymns that is done well.”

In your on church, perhaps you could suggest that VBS leaders, Sunday school teachers or children’s choir adopt sign language as they teach new songs. It’s another kind of “whole-body” worship that is not only fun, but prepares children to communicate with their Deaf brothers and sisters.

Note: There are both print resources, like this children’s songbook, and also videos online that teach signing for Bible songs. Unfortunately, I have not found a free children’s song video library online as a resource for churches. Maybe that would be a mission one of our Episcopal churches could undertake!