Several years ago the church I currently serve decided to end their Wednesday healing service, opting instead to add healing prayers to the Sunday morning liturgy. I learned about it during my interviews when it was made very clear that this was a sacred tradition (albeit a new one) that was going to stick around. I began working at this church last month and each Sunday I must be intentional about including these prayers. I’m so used to moving straight from the post-communion prayer to the final blessing that on my first Sunday I forgot it all together…and then heard about it during coffee hour. The following week I made notes in my personal Book of Common Prayer and the altar book reminding me to invite people forward for anointing and laying on of hands.

Those who desire this sacrament stand before me for anointing while surrounding church members lay on hands. One week no one came up, other weeks there are a couple of folks. The Sunday after Dr. Ford and Judge Kavanaugh testified before the Senate, we had a record number of people seek healing. One of those people was my seven-year-old daughter.

She was invited by the woman seated next to her on the front row to lay hands on a gentleman who came forward. My daughter cautiously stood up, took a few steps, and gently touched his arm. Then she laid hands on the woman next in line. And then, she stepped in front of me, looked up and asked to be anointed. 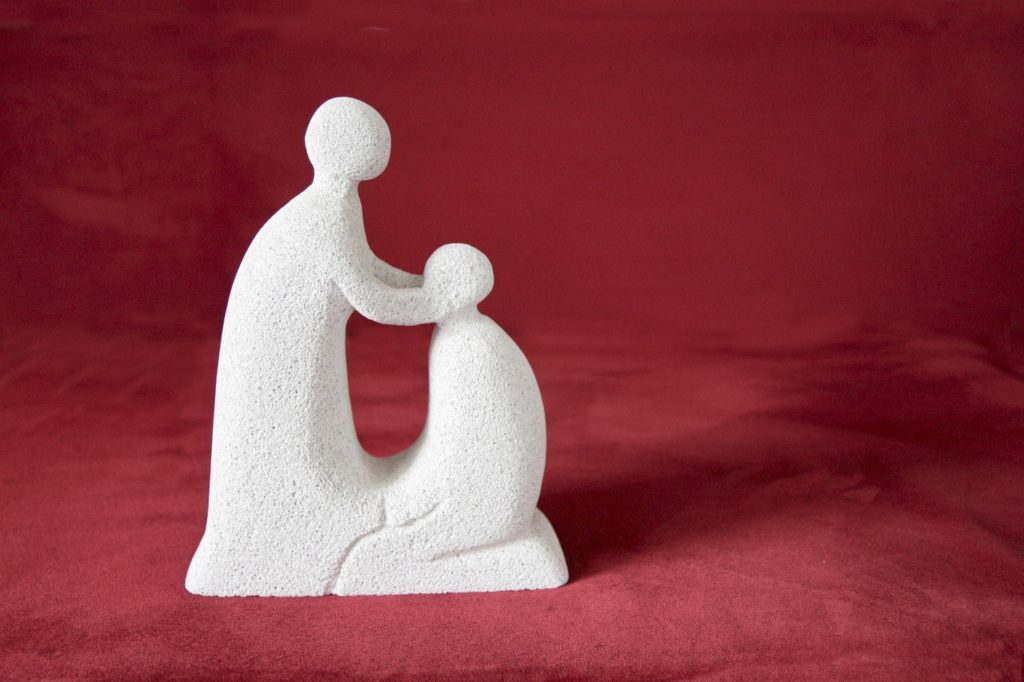 This was only my daughter’s third Sunday at this new church. The first week she and my son behaved beautifully. The second week, not so much. That week I shot her you-better-start-behaving laser beams out of my eyeballs while preaching. This third week my son decided to sing with the choir and my daughter set up shop on the back row with a stack of books. Then during the prelude, two people she didn’t know sat down on either side of her, and she fled to the sacristy. When she finally returned during the epistle reading, she walked to the front row and sat down so close to me that we could have held hands.

Like me, she’s still finding her way in this new church community. But something big happened during those healing prayers. She connected with fellow members while touching their arms and their hands touching her shoulders. She told me after church how fun it was praying for people who felt sick and then being prayed for herself. I caught her smiling in the mirror once we got home, checking to see if the oil she could still feel on her forehead was visible. The following week as I placed the communion host in her small hands, she asked me if she could also get the oil and blessing. Soon, I told her.  Right after our thank you prayer.

Today is the Feast of Saint Luke the Evangelist, the person attributed to writing the biblical books of Luke and Acts. Luke is often described as a physician because of Colossians 4:14 where the author relays that “Luke, the beloved physician, sends his greetings.”

Physicians rely so heavily on their hands to detect problems in our bodies. Jesus relied heavily on his hands for healing people during his time on earth. On this feast day I’m reminded of the role our hands also play in the sacraments of our church. Clergy touch the water in baptism, the bread during the eucharist, join the hands of couples getting married. Hands are laid upon the head for confirmation, ordination, and also upon those seeking healing.

A way to celebrate the Feast of Saint Luke today is to prayerfully lay your own hands on members of your household. You can hold a service of healing prayer and it need not be long or even formal. After dinner tonight, I invite you to open with a prayer acknowledging God’s presence in your midst. Ask those gathered to share something that’s troubling them like an illness or school assignment or friendship or something at work. Then lay hands upon each other’s head, shoulders or arms and take turns saying a prayer to ask God for healing.

You never know, your children might even find it fun to pray for people and being prayed for themselves.