Like many Americans of my generation, whether adults or children, I was a big fan of “Peanuts,” the cartoon created by the late Charles Schultz. I couldn’t wait for the Sunday papers to arrive so that I could turn immediately to the page where Charlie Brown, Linus, Lucy, Snoopy, and their motley groups of friends held court. Their amusing adventures and experiences never failed to make my parents and me laugh.

I learned as an adult Schultz intentionally drew them in the peculiar ways they turned out: Lucy with her oversized mouth, Charlie Brown with his nearly-bald pate and woe-is-me expression, and the rumpled Pig Pen, eternally surrounded in dust. They each possessed distinctive and unchanging personalities that made them both predictable and endearing.

There were several reasons why I loved each of the main characters, but what I enjoyed most about the Peanuts gang was that they came across as real children. They were kids like me who went to school, struggled at times with their lessons, and were mystified by the grownups with whom they engaged. They played games which Charlie Brown could never win, teased one another, and developed crushes.

The Peanuts kids also celebrated popular holidays and in 1965, Charlie Brown and his pals moved from the funny papers to the big time: television. Actors gave the Peanuts gang their unique and now recognizable voices while Vince Guaraldi’s now iconic score played in the background. Over the next decade many Peanuts TV specials would follow, but that first one “A Charlie Brown Christmas” was different than all of them. It played to a wider audience and offered a more significant story.

“Christmastime is here, happiness and cheer,” sing the kids in the introduction as they glide in a serpentine Snap the Whip line with Snoopy in tow across a frozen lake. I, too, sing along with them, reveling in every note of Guaraldi’s immortal score. I never tire of the uncomplicated melody, which evokes of joy, hope and innocence. Charlie Brown frets to his pal Linus about not knowing what Christmas “is all about.” The commercialization of the season, heavy with bling and glitz, leaves him feeling confused and kind of empty. Even Charlie’s dog Snoopy has his canine pad rigged out with colorful and flashing lights. But for Charlie Brown, something is wrong with this picture. Something is missing.

He seeks counsel from Lucy who declares he needs to get more involved with a Christmas project. She names Charlie Brown director of the annual Christmas play. Despite his best efforts to organize it, the pageant doesn’t come together. No one cooperates, least of all Snoopy, who prefers dancing to listening to his master’s instructions.

Charlie Brown and Linus slip out of the chaotic rehearsal to buy a tree for the pageant. They find shiny and glammed-up trees everywhere, but nothing real or meaningful. Until that is, Charlie Brown spots a bedraggled little specimen whose needles have all but fallen off. Charlie Brown takes pity on it, buys and presents it to his friends. Rather than embrace this tree, the Peanuts gang laughs at it and at Charlie Brown. Charlie Brown hangs his head low and forlornly states that everything he touches turns into a disaster. He clearly doesn’t understand Christmas wants to know if anyone can actually tell him what it’s all about. 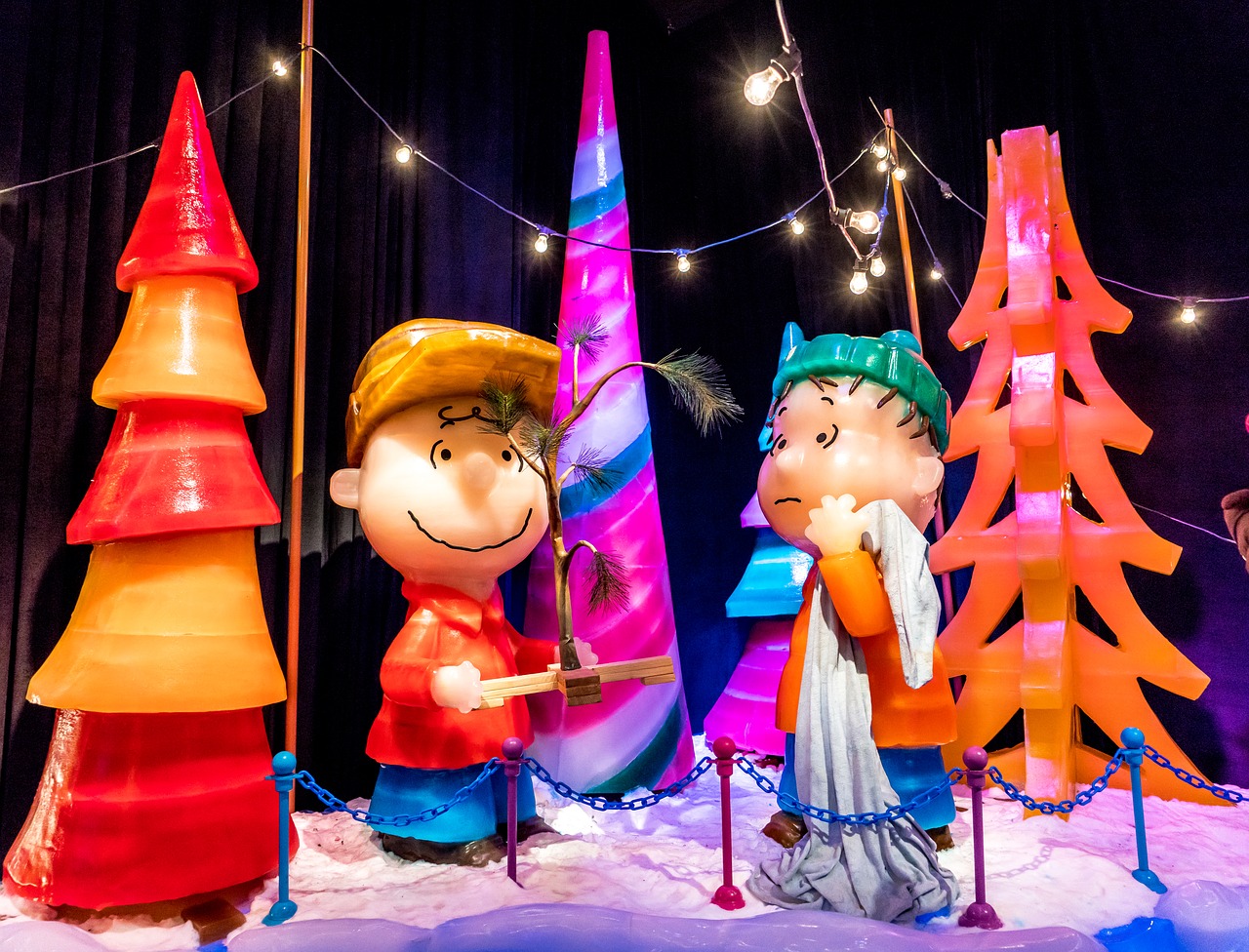 “I can tell you what Christmas is all about, Charlie Brown,” says Linus very calmly.

The school auditorium lights dim as Linus (now without his trusty security blanket) takes to the empty stage. “And it came to pass in those days that there went out a decree from Caesar Augustus that all the world should be taxed…” Once Linus has finished reciting the ancient verses from the Gospel of Saint Luke, Charlie Brown finally understands what Christmas is all about.

The pathetic little tree that looked as if it wouldn’t amount to much, then receives a loving and twinkling makeover from the Peanuts gang, and becomes a Christmas present to Charlie Brown. “It isn’t such a bad little tree; it just needed a little love,” says Linus, wisely. As do we all; sometimes we just need a little love.

While “A Charlie Brown Christmas” is an animated cartoon about characters who look funny, who make silly noises and often pratfall, Linus’s recitation of Saint Luke’s verses is its solemn core. For a few moments, the story’s busyness is suspended to make room for a larger and more eternal story.

Charles Schultz’s brilliance lies in having none other than Linus, often presented and judged (especially by his sister Lucy) as a bit babyish and too meek to be taken seriously, to offer the biblical narrative about another and very special child’s birth to his peers. Not unlike the puny tree, which the kids had ridiculed and rejected, Linus emerges from his customary lesser status to be the one who knows the truth about Christmas. The baby of whose birth Luke tells would also grow up and be subjected to ridicule and rejection before his true greatness would be revealed. Sometimes it takes a child, a blanket-toting, thumb-sucking Linus sort of child to remind the Charlie Browns of the world what life, love, and other important things are all about.

This is why I added “Merry Christmas, Charlie Brown” to my DVD collection, and why watching this animated classic every year over these many decades is one of my cherished Christmas traditions. Merry Christmas!