It’s been less than a year since our family’s returned to St. Luke’s Episcopal Church, so there are still surprises in the liturgical calendar. “Please wear red on Pentecost,” invited Father Randall. I owned nothing red except for a waffle-knit funnel-neck shirt that obviously screamed fall even though the weather was basically expected to be just that.

What happened to that thin sweater, bright red? It had come in a bag of hand-me-downs from the three teenaged girls next door. The tag at the neckline had been aggressively removed leaving two gaping holes. I reclaimed it from the Goodwill pile and tried it on again. It seemed just the right weight for a cool spring morning. It was also the perfect shade of bright red to quietly and properly shout “Happy Birthday, Church!” Also, wasn’t it appropriate that a red Pentecost garment have a redemption story of its very own?

I thought of pairing the sweater with a linen scarf from my mother-in-law. She received it from her friend Rukmini as a souvenir from India. It could be worn hippy-style like a headband or maybe as a belt at the waist, or even turban-like around the head. What a symbol that would be of the global church – head beautifully wrapped like former Liberian president Ellen Johnson Sirleaf.

I never made it to church. One child was feverish so we all stayed home. I did see the glorious red balloons bobbing from the pews on Facebook. It was a sleepy, wet morning but in the afternoon the rain stopped. Juan and I left the girls home and went out for a short hike through a nature preserve and then to the market for chicken and barbecue sauce.

At the preserve we found yet another trail we’d never taken. Juan got busy rustling around in the brush like a chipmunk, trying to find something heavy to weigh down a low dogwood branch. It was an experiment of sorts to see if he could get it to take root. Meanwhile, I stepped my booted foot up into the crotched trunk of a maple on the edge of a marsh and looked out into it, watched my spouse from above, listened to the birds from up in their own territory.

We returned to the path and came to a swampy place where bright green algae thrived and skunk cabbage rose from the dark still water, a place I wouldn’t want to be near in a few months because of mosquitos. There was a rickety improvised bridge of planks and half-submerged pallets, bendy from the water and our weight but sturdy enough to keep our feet dry. We were halfway across when it started to rain.

Juan wanted to go back but I insisted we cross over and check out the other side first. I could see a giant beech tree up on the bank that he couldn’t see from where he was. Its smooth bark was vandalized like so many of the old beautiful beeches in the preserve. Once we’d both crossed we stood in the shelter of that tree, the leaves catching the drops like the snare of a drum. We listened to the rain plunk and percuss on the broad new leaves and didn’t get at all wet. 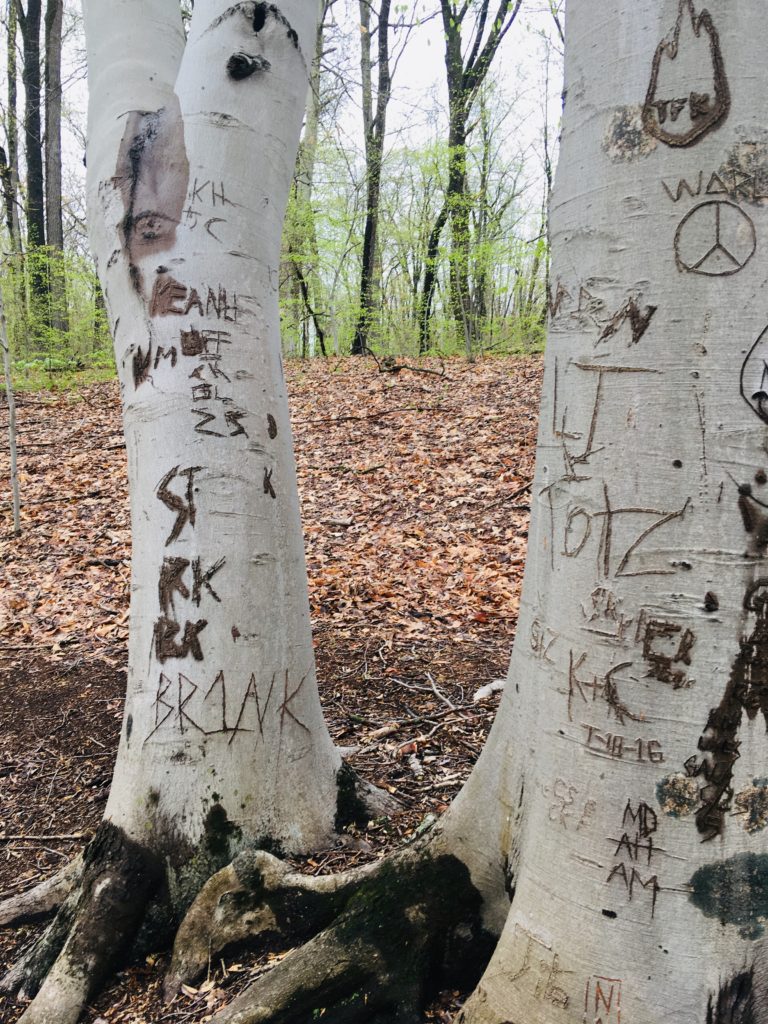 I was still wearing the red sweater and a red necklace given by our friend Veronica in Chicago. “Kiss me,” I suggested. And we kissed under that tree, under all those thousands of sweet young leaves. We kissed not with the wild passions of youth, but with the brief peck of a couple together for a decade and a half that says here I am with you, my favorite one, and it’s raining and we have to get all the way back but I’m glad to be with you here under this tree in this moment.

On the way back we saw a little warbler. It had an almost uniform yellow-green color that nearly matched the moss he was hopping near. He didn’t seem frightened of us at all, despite being very close. Our best guess is that it was a Wilson’s warbler which The Peterson Field Guide classifies as rare. They nest on the ground in their breeding grounds in Canada and Alaska and are known for being difficult to identify because of their busy ways, their constant flitting movement. This little friend hopped about playfully, characteristically, in what the bird book calls “moist tangles” of underbrush. Unhurried, uninhibited, unaware of its rarity was this little pilgrim. Surely it was passing through on its way to start a family farther north, moved by some unseen inner current called instinct—an internal inertia, a mysterious pull, a fire, a rush of wind.