When we had our first babies, reading aloud was a way to pass the time, from Narnia to seminary homework. The babies did what babies do while we read aloud. And then those babies got older, and the days turned to evenings and we were tired. Tired from toddler questions and messes; and loving meant more patience than we could sometimes muster, and so we read aloud. Fairy tales and The Children’s Storybook Bible telling of the Holy Spirit coming at Pentecost like a kiss waking those first believers who had been but asleep.

Then there were more babies, and there were first graders, and toddlers, and nursing babies, and sometimes this momma needed them to just stay put. And so I read and I read, and this is what happened. 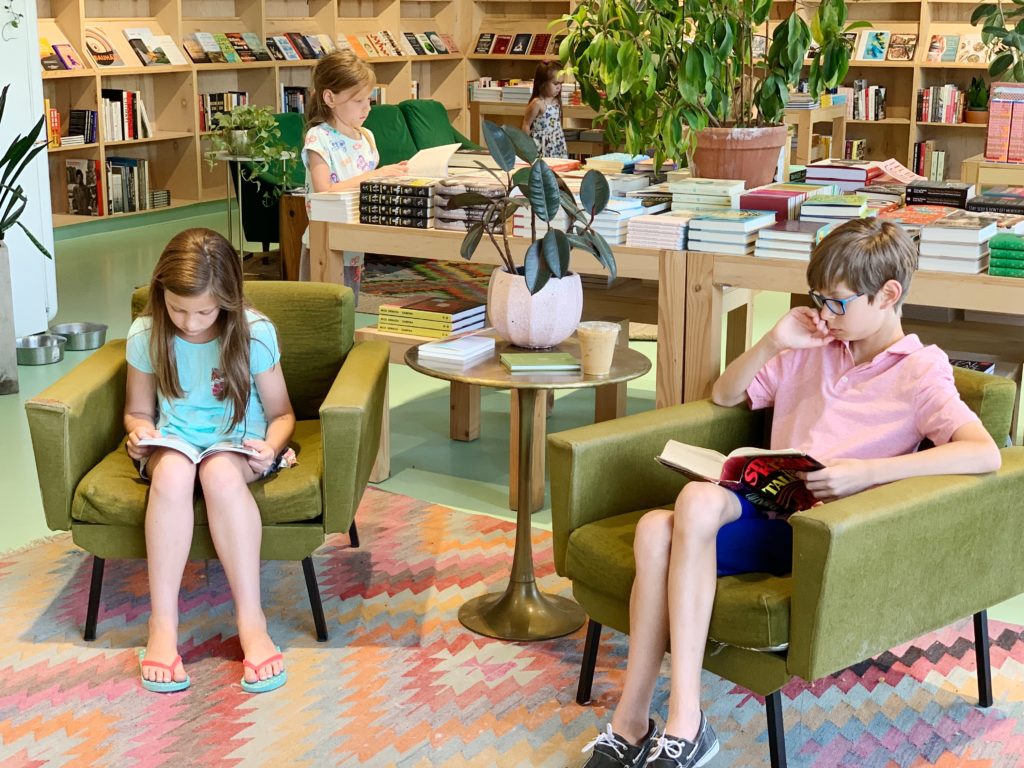 When it was raining the momma read Charlotte’s Web and when the sun blazed, she read Hardy Boys, and when the children were sick, she read Roald Dahl until there were no more to read.

And when the daddy came home wanting his love to be known, but weary from the pressures of his job, his solution was, “Let’s find out what happens to Harry!” And the children would gather, foraged wands clutched, sharing in the same adventure. At breakfast he read stories of Jesus bringing sons and daughters back to life, putting an ear that had been cut clean off by the sword back on to a soldier’s head, and at dinner of Saint Francis, and Saint Catherine, and the children and the momma listened.

Then the children became readers themselves. Memory work came easy for them, who had already had those comprehension muscles stretched. The son whose kindergarten teacher read of Alice and Peter Pan, chose sixth grade level books at the library. When  the daddy wasn’t home to tuck in but only to kiss on the heads, the momma read about the girl Sara Crew, a princess because of the loveliness she showed even the least of them. She read the wisdom of Marmee shepherding her little women, teaching them about righteous anger and how to temper anger. Sometimes they understood all the words, and sometimes they didn’t.  And sometimes the momma listened to a child read, the words blurring while she fought the fatigue of a long day.

The prayers were read at breakfast, and the new readers at the table jumped up to show their skills. Some of the words taking a long time to sound out, but them managing with ease words like “righteousness,” and “penitent,” because they had heard them read so often before. And the older children learned patience.

During Advent the family counted their way down to Christmas with books. The children watching the momma cry when she read the one reminding them that because of Christ, all is well. And then when their priest called that day feast day of Julian of Norwich, quoting her words “all shall be well, and every manner of things shall be well…” why was that familiar?  But there were the momma’s tears again, and their baby sister who almost died came home today, and well, all was well.

And then the daughter was in high school writing poetry, needing all to be well again, so she made verse out of that magical healing power of Jesus. And the once kindergartener wrote with humor, adding humanity to those same stories of Jesus he had heard since he was an infant, knowing who to attribute the meaning of everything to.

And there were very young children still, and they watched the tears on the momma’s face again, but this time because she was laughing so hard at Clementine. And they knew that if they asked her to read, she would rarely say no. And she knew that it was catching, for nothing made her children feel so important as to have her attention, and so she listened while they learned to read, and when they learned from The Witch of Blackberry Pond, and when they were stunned by Just Mercy.

And then it was a new season again, and the teenage son with the new heart valve, in bed but unable to sleep asked, and the momma knew he meant to keep his mind off of other things.  So she read to him and the others, about those kids helping Mr. Benedict, and the words were kindness and wisdom and sacrificial love.

What began as a way to survive the trenches of parenting, was continuing as a way to write wisdom on their hearts.